Marx & Philosophy Review of BooksReviews‘The Beach beneath the Street: The Everyday Life and Glorious Times of the Situationist International’ by McKenzie Wark reviewed by Anthony Paul Hayes 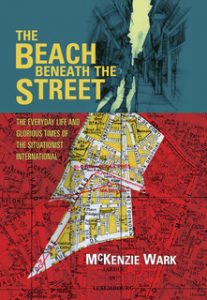 McKenzie Wark
The Beach beneath the Street: The Everyday Life and Glorious Times of the Situationist International

Anthony Paul Hayes has a PhD in Philosophy from the Australian National University. He wrote his …

Early in his book on the Situationist International (SI), McKenzie Wark writes: ‘Do we really need another commentary on Guy Debord’s Society of the Spectacle?’ (4). It is an odd question, considering the dearth of good critical commentaries on Debord’s work in the English language. Certainly there is a growing quantity of books on the SI, as many have noted. Unfortunately, few provide new or insightful things to say on Debord’s La société du spectacle published in 1967. One exception is Anselm Jappe’s Guy Debord, translated into English and published in 1999. Wark notes that Debord’s 1988 Commentaires sur la société du spectacle is ‘enough,’ but this is mere rhetoric, and facile at that (ibid.) If we can consider any author’s commentary on their own work ‘enough’, then why bother writing a book such as Wark’s, which presents itself as commentary upon the SI? A better question to ask is: ‘Do we really need yet another fragmentary and inadequate introduction to the SI?’

Cunningly subtitled ‘The everyday life and glorious times of the SI,’ Wark’s The Beach Beneath the Street mostly covers aspects of the group before the so-called split with the artists in 1962. It is the oft- described ‘artistic’ SI of 1957-62 that is Wark’s main focus. He is also concerned with the Lettrist International pre-history of the SI in the 1950s, as well as some of the influences and results of the 1957-62 period, such as Henri Lefebvre and the work of Constant and Alexander Trocchi after they left the group in 1960 and 1964 respectively. About the greater portion of the SI’s ‘glorious times’ Wark barely writes. Crammed into the brief, final chapter is miserly coverage of the 1962-72 period of the group, his account remarkable only for its brevity, omissions and haste. Here you will find name-checked the group’s article on the Watts riots of 1965, and their book on the wildcat strike of May 1968. However, Wark is not capable even of dedicating the entirety of the eleven pages of this chapter to what is without doubt the most significant period of the SI’s ‘glorious times’, whether considered from its general effects upon working class contestation in the late 1960s and 1970s, or its enduring legacy for pro-revolutionaries today.

Wark is at his best when he writes ‘The Beach Beneath the Street claims no originality whatsoever’ (3). Certainly his book adds nothing new, whether in empirical revelation or critical commentary. When it comes to more positive claims for his work, Wark puts forward vague statements as a smokescreen: ‘it’s a question of retrieving a past specific to the demands of the present’ (ibid.), and ‘the criterion for inclusion is not historical importance but contemporary resonance’ (4). The problem is that Wark, in presenting a false dilemma between ‘historical importance’ and ‘contemporary resonance’, never clarifies why the ‘demands of the present’ require him to present this account rather than another.

In his defence, Wark presents his book as an attempt to avoid ‘artifacts […] too well remembered’, such as Debord’s The Society of the Spectacle and Raoul Vaneigem’s The Revolution of Everyday Life, significant works of the post-1962 SI (ibid.) We should be suspicious of any account of the SI that proclaims its intent to ‘bypass’ the two best-known works of the group. Despite Wark’s apparently noble desire to ‘draw attention to some less well-known moments’ in order better to highlight the emergence of the ‘collective existence of the Situationist International’ from ‘the practice of everyday life’ (ibid.), it never occurs to him that Debord’s and Vaneigem’s books were the clear results of the collaborative everyday practice of the SI, distillations of the situationists’ attempt to realise philosophy, even if ‘written’ by the aforementioned individuals. To understand these works in term of the collective activity of the SI, particularly of the SI between 1962 and late 1967 (when both of these works were published), would go some way to correcting the spectacle of Debord and Vaneigem as the individual geniuses of the SI, a conception propagated by the enemies of the SI rather than the SI themselves. Wark appears to be aware of such spectacular appropriations of the situationists. Sadly, the effect of his ‘bypass’ is to reinforce just such a false picture of the SI. A better option would have been to confront it head-on.

If we consider Wark’s account of the 1962 split, we begin to understand his work as the confluence of its many faults: its omissions, its patchy research, its barely repressed bias in favour of the so-called ‘aesthetic’ phase of the SI pre-1962; all come together in his less than illuminating account of the SI in the crucial years of 1960 to 1962. Unfortunately, in the chapter dedicated to the 1962 split and its aftermath, Wark omits crucial events, and confuses the timing of others in order to produce a picture conducive to his perspective: ‘Art was now officially anti-Situationist. Spur were expelled. There was no procedure, no consensus. They were out’ (113).

Puzzling is Wark’s version of the simmering tensions between the Spur artists and the rest of the SI from the outset of the Spur group joining in 1959. His account suggests that such tensions arose from the Spur artists tilting the SI ‘toward their particular concerns’ (111). Wark needs to make such an assertion in order to set up Debord as the master manipulator, gathering ‘the forces that would enable him to dispense with their [the Spur artists’] nettlesome presence’ (ibid.) Discussion of two significant milestones in the development of these tensions, the 4th Conference of the SI held in London in September 1960, and the 5th Conference of the SI held in Göteborg in August 1961, are dealt with in the most cursory fashion. Wark mentions the 4th conference at the beginning of the chapter on the split, but only in the most superficial way, i.e. he does not mention any of the debates at the conference, in particular the debate over the role of artists and the proletariat initiated by the Spur artists, favouring instead a redundant literary description of the building in which the conference was held. Of the 5th conference there is not a word, even though it was at this conference that the argument between the Spur artists on the one hand, and Debord, Kotányi and Vaneigem on the other, reached its peak.

Considering Wark’s charge that ‘art was now officially anti-Situationist’ as a result of the 1962 split, it is interesting to note that it was at the 5th conference in 1961 that the work of art is first described as ‘anti-situationist’ by Attila Kotányi and Vaneigem. Significantly, Kotányi argued that this did not mean that situationists were forbidden to create art objects; such an injunction would, in any case, be ludicrous in a group that neither held nor aspired to the spectacular power it contested, not to mention the ongoing creation of art objects by situationists in the SI after they split with the artists. Rather, Kotányi, Vaneigem and Debord were arguing against the tendency of the Spur group of artists who juggled their ‘real world’ obligations to art dealers and the art market with their membership in the SI, even using the caché of their membership of the SI as a selling point for their art. As Vaneigem noted at the same conference, ‘the point is not to elaborate a spectacle of refusal, but to refuse the spectacle. In order for their elaboration to be artistic in the new and authentic sense defined by the SI, the elements of the destruction of the spectacle must precisely cease to be works of art’ (Situationist International, 2006).

There is nothing redeeming about Wark’s account of the situationists. That is not to say that there is no potential in his subject matter. A striking example of this is his chapter-long consideration of Asger Jorn’s Critique of Political Economy. Little has been written on Jorn’s 1960 book criticising Marx’s conception of value. Wark, however, never manages to improve on a similar exegesis in the final chapter of Richard Gombin’s The Radical Tradition. Considering Jorn’s critique of Marx’s formalism, a misguided critique at that, you would think that Wark would attempt to relate it to more recent scholarship on Marx’s theory of the value-form. However, Wark is completely out of his depth, opting like Gombin for a largely descriptive exposition rather than a critical interrogation. Jorn’s criticism of Marx can be excused insofar as he apparently had access neither to the Grundrisse nor, understandably, to the rich tradition of value-form criticism that began to develop in the 1960s and 1970s. Wark has no excuse in this regard. The best he is able to do is to have Jorn speak like Jean Baudrillard avant la lettre. Thus Marx is taken to task for the well-worn charge of reducing all value to a labour essentialism. However, such a charge can no longer stand against Marx’s conception of value as a form that is imposed through capitalist social relations, a conception that has been more clearly revealed through value-form criticism. What Jorn had in his sights was the ‘orthodox’ Marxist concept of a value substance or content that is revealed through the development of productive forces. Certainly, Jorn was right to take this conception to task; where he was wrong was in attributing it to Marx rather than to the Marxisms of the Second and Third Internationals. By merely resurrecting Jorn’s anachronistic critique, Wark inadvertently reveals how much he has in common with Castoriadis, Baudrillard, Lyotard and other ‘critics’ of Marx who rarely moved beyond confusing Marxism with Marx. Of more interest would have been an account of the relationship between Jorn’s critique of Marx, and Debord’s critique of Marxism set out in the fourth chapter of The Society of the Spectacle. Here Debord examined the tension between Marx’s innovatory dialectical critique and its reduction to an ideology of technical innovation and ultimately capitalist renewal. Sadly, the possibility of such a fruitful discussion is foreclosed by Wark’s ‘bypass.’

McKenzie Wark is a false friend of the SI, whether in terms of their historical importance or their contemporary resonance. The writings of the situationists are still the surest guide to their theory and practice, and perhaps even more accessible than Wark’s attempt, considering their ready availability online. You can find most of them online in English translation at Bureau of Public Secrets, Not Bored! and Situationist International Online.