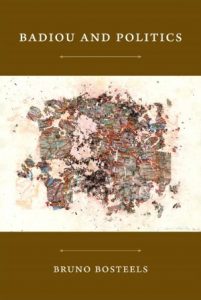 Tom Eyers is a post-doctoral Fellow in the Humanities at Washington University in St. Louis. His …

2012 is an interesting time to consider the role and efficacy of radical political philosophy. Occupy movements continue to resist heinous attempts at suppression and victimization by the police across the United States, while anti-austerity demonstrations begin to erode the democratic legitimacy of politicians in Europe, and especially in Romania and Greece. The ‘Arab Spring’ enters its second year, with the balance of forces in Egypt, Syria and elsewhere changing almost daily. To many, 2011 marked the beginning of a new era of revolt against entrenched and unaccountable authorities, whether they be oil-rich kleptocracies or ‘liberal democracies’ organized to benefit a rapacious financial system. Others will caution that those same authorities are most likely to neutralize those movements that succumb to self-division and the clarion call of compromise, evinced in the Occupy movement by the dispiriting sight of activist ‘peace police’ attempting to suppress militant action in Oakland and elsewhere. Meanwhile, the market in academic and para-academic ‘critical theory’ continues to grow, much of it developed and sold at conferences populated by an increasingly established set of highly paid ‘stars’, including the subject of Bruno Bosteels’ long awaited new book, Alain Badiou.

The example of Badiou helps dramatize the ambiguous, sometimes troubling role of radical philosophy in its relations with the societies it affects to critique, and to those wider militant movements in the West and elsewhere. Badiou has a long and admirable personal history of activism in France, where his bracing theoretical commitment to a radically egalitarian conception of politics has translated, most recently, into his efforts to mobilize the ‘sans papiers’, or immigrants without documentation. Underlying his own activism is an increasingly sprawling body of philosophical work begun in the early 1960s and conducted from the very summit of French academe, much of it predicated on the development of a distinctly post-, if not non-Marxist politics of fidelity to transhistorical, quasi-Platonic Ideas or Truths. Such Truths, for Badiou, manifest in events that arise out of the obscure, disavowed points of situations or ‘worlds’, points that serve as their constitutive exception.

Rhetorically, Badiou manages to move quickly and successfully between high philosophical speculation and punchy, sharp polemic, a movement sometimes achieved within the same work and sometimes distributed among different books of widely varying lengths. Perhaps not coincidentally, much of Badiou’s recent writing has focused on the relation between ontology, defined by inconsistent multiplicity as it is thinkable through mathematics, and appearance, a tension at least analogically close to the (potential) relation between the abstractions of philosophy and the lived complexity of militant political action. Badiou’s recent Logics of Worlds (2006) employs an ‘objectless phenomenology’ to provide a philosophical account of appearance that avoids the temptation of the transcendental subject, positing mathematical category theory as a privileged instrument with which to understand the identity of objects in a given ‘world’ according to their relative intensity of belonging. The result is a kind of ‘post-structuralism’, if structuralism hadn’t been followed by the hyper-textualism of deconstruction; Badiou, that is, puts to work many of the conceptual advances of structuralism while positing set-theoretical and category-theoretical mathematics as more nuanced instruments for outlining an anti-humanist ontology. Bosteels is particularly skilled at rooting the debt of Badiou’s political philosophy to earlier discussions around structure and logic conducted in the 1960s, even as his reading is conspicuous in its downplaying of the mathematical apparatus of Badiou’s thought. As Bosteels writes, ‘Every logical and ontological operation, however formal it may well seem to be, must … be related against the grain to the experiential core that conditions it’. (43)

For Bosteels then, but I would argue not for Badiou, it is the experiential, the lived moment of revolt, that takes determinative precedence over its formal elaboration. Bosteels, of course, has set himself the task of writing explicitly on Badiou’s relation to politics, and it is unsurprising therefore that his focus should fall on the continuities in Badiou’s political thought, over and above their eventual formalization in mathematical terms. Nonetheless, Bosteels convincingly demonstrates the dialectical richness of Badiou’s relation of politics to theory.Particularly strong, for example, is Bosteels’ account of the ways in which Badiou has taken on and advanced Althusser and Lacan’s rethinking of causality, among other concerns at the intersection of politics, epistemology and ontology. As Bosteels writes of Badiou’s enduring dialogue with Althusser,

Althusser’s dialectical materialism … in at least two ways anticipates and prepares the ground for the philosophy of the event in Badiou: first, insofar as the continuous task of processing the line of demarcation between science and ideology obliges us to conceive of these two types of discourse, like truth and knowledge, as tendencies in an ongoing battle … and, second, insofar as the theory of structural causality and overdetermination, when properly understood, reveals itself against all odds to be a theory of historical possibility, that is, a theory of the event, and not a theory of determinism. (60)

I quote Bosteels at length here in order to underline the novelty and rigor of his reconnection of Badiou’s later philosophy of the event with prior thought in the French Marxist and psychoanalytic traditions. In the above, Bosteels underlines, against many critics of Althusser and now Badiou, the inherent link between a discontinuous theory of history and the model of complex social relations encapsulated in Althusser’s theory of structural causality. Underlined too is the important influence of Lacan’s epistemological revisioning of the relation between truth and knowledge, although, as Bosteels notes, Badiou has consistently chided Lacan for remaining within a constrictive structural paradigm: “Lacan’s psychoanalysis, Badiou states, ultimately reduces the topology of the constitutive outside to the mere recognition of a structural given … In the end, what this criticism confirms is the need for a symptomatic torsion that would not remain on the structural level of recognition of an outside within but that instead passes over in the disqualification or destruction of the old inside the new.” (140) In other words, one requires a precisely political overcoming of any merely structural recognition of the immanence of the conditions of the new in the old, a political overcoming that remains, on Bosteels’ reading, essentially Maoist in Badiou’s work, early and late. What is particularly intriguing about the centrality of these earlier debates even in Badiou’s later, mathematically-oriented work is how much they complicate Badiou’s own claim to have turned fundamentally to ontology with the publication of Being and Event in 1986. Rather, if Bosteels’ thorough account is to be believed, it is primarily epistemological questions – the nature of causality, the discord between truth and knowledge – that formed the condition for Badiou’s turn to an ontology predicated on set-theoretical mathematics, an ontology that contains within it a thorough rethinking of the conditions for the irruption of truth against everyday, situational knowledge.

Bosteels’ most distinctive claim is that it is Badiou’s most forcefully Maoist text, Theory of the Subject (1982), that provides the key to an understanding of Badiou’s oeuvre as a whole. (For an analysis of Badiou’s text itself, see Eyers (2010)). In contrast to a number of readers, and to some extent against Badiou’s own self-understanding, Bosteels posits the book as what he calls a ‘vanishing mediator’ between the later texts Being and Event and Logics of Worlds, especially in so far as the latter books require a theory of the subject as that which ‘incarnates the syntax of the exception that distinguishes the materialist dialectic from what Badiou … dubs “democratic materialism”’ (199), or the reactionary thesis that all that exists are bodies and languages. Bosteels is surely right to emphasize that it is the question of the subject, not simply as the collective body produced by fidelity to an emancipatory event, but also as the precarious self that precedes the event, that remains the key element, and key ongoing question, of Badiou’s theorization of radical change. Logics of Worlds (2006) performs a return to the analysis of modes of subjectivity found in Theory of the Subject (1982), especially around the thematic of courage and anxiety in the face of evental change, but Badiou has yet to better his analysis of the problem in the earlier book, even as that analysis suffers from a rather limited take on the import of psychoanalysis for an understanding of subjectivity.

If the primary strength of Bosteels’ book, then, lies in its demonstration of the unremitting force of Badiou’s political thought as it interfaces with questions of radical epistemology and ontology, there is also much to be found of Bosteels’ own take on the requirements for critical thought today. In a chapter on the ‘speculative left’, Bosteels convincingly outlines the limits of radical democratic thought, while calling too for a reunification of historical, dialectical and post-Marxist thinking. It is in the question of Badiou’s own, conflicted relation to the Marxist account of history and dialectics that Bosteels makes his strongest criticism of other contemporary readers of Badiou, most notably Slavoj Žižek, Peter Hallward and Daniel Bensaïd. Too often, Bosteels argues, such thinkers have reduced Badiou’s philosophy to a kind of ahistorical, dogmatic leftism, an accusation that “refuses to absorb the long-standing critique of leftism that we find throughout Badiou’s writings.” (285) One wonders, though, how likely it is that one will ever find an ultimate rapprochement between the structural rigors of mathematical ontology and the “collective project of making a common front” in Badiou’s work, a unification that Bosteels sees as lying in potential throughout much of Badiou’s philosophy, early and late; much of Badiou’s most recent work, to the contrary, hinges on what threatens to remain an idealist subtraction of the ‘Idea’ of communist politics from its conflicted manifestation within the possibilities of history.

And what of the efficacy of radical political theory in the face of tumultuous, fast changing world events? If it is, by definition, unfair to expect critical theory to respond at the level of direct relevancy to the current conjuncture – if, indeed, such an imperative would dilute the very critical potency that makes the best critical writing transcend the immediate context of its composition – the circumstances of philosophical production and reception should, nonetheless, figure more in our reading, should trouble us more even as we learn from the ‘stars’ of the current philosophical firmament. Those circumstances – institutional, economic, academic – form the ambient frame through which Bosteels’ luminously written reflections on Badiou’s political philosophy should be read.