Marx & Philosophy Review of BooksReviews‘Nonsense on Stilts: How to Tell Science from Bunk’ reviewed by Paula Cerni 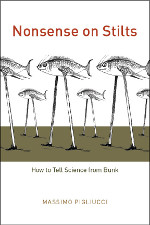 Massimo Pigliucci
Nonsense on Stilts: How to Tell Science from Bunk

Paula Cerni MPhil is an independent writer. For a list of publications, please visit …

Judging by widespread public belief in miracles, homeopathy, and assorted other superstitions, today’s society badly needs popular philosophy. And so, in this book, philosopher and biologist Massimo Pigliucci introduces lay readers to the philosophical ‘demarcation problem’ of how to distinguish science from pseudoscience (and, more generally, from non-science). It is a promising strategy, but the result, though stimulating, reads less like a careful in-depth exploration and more like a rushed and bumpy tour of topics, including ‘soft’ versus ‘hard’ sciences; speculative theories and quests such as the various interpretations of quantum mechanics and the search for extraterrestrial intelligence; AIDS; astrology; the role of think tanks and the media in promoting anti-scientific ideas; Intelligent Design; a history of science from Egyptians and Babylonians to Darwin in less than two chapters; experts; and more.

It was Karl Popper who posed the ‘demarcation problem’ in its contemporary form, but, as we find out in this book, his famous solution, falsificationism, has now fallen out of favour among philosophers of science. The hard line of demarcation has been smudged into a fuzzy grey area, which is quite right, since demarcation is an aspect of definition, and, as Engels argued in Anti-Dühring, definition is always inadequate: ‘The only real definition is the development of the thing itself, but this is no longer a definition’. Fuzziness, however, should not mean that ‘anything goes’, as Feyerabend put it; nor that, as Larry Laudan has argued, the question of what is and what is not scientific should be abandoned altogether (Laudan 1988). For ‘ordinary purposes’, Engels properly went on to say, ‘a brief exposition of the commonest and at the same time most significant features of a so-called definition is often useful and even necessary’ (Engels 1975, p.405). Pigliucci defines science as ‘an investigation of nature, based on the construction of empirically verifiable theories and hypotheses’ (303).

This definition, however, falls short in that it leaves out the historical human being as both subject and object of science. Science is made by and for people under conditions that are socially determined. Its distinguishing characteristics – its goals, its methods, even its philosophy – are best understood as jointly evolving parts within the broader process of human history. Yet Pigliucci’s definition of science as a study of nature, together with the assumption that what must be drawn is, after all, a demarcation, rather than also a relation, makes it all too easy to ignore these vital connections. Indeed, he goes as far as to place the study of human history in the very fuzzy no-man’s land of the ‘almost science’, whence it might only be rescued by heavily natural-science-influenced accounts along the lines of Jared Diamond’s Guns, Germs, and Steel.

Unsurprisingly, this slighting of social history goes hand in hand with a cavalier attitude towards Marxism. Utterly ignoring its role in the development of a materialist and historically-minded philosophy, Pigliucci misrepresents and dismisses it in just a few sentences with a nod to Popper’s ‘falsificationist’ critique. Never mind that Marxism couldn’t possibly recast every historical event ‘as the result of economic class struggle’ (2), since historical events have multiple determinations, and, in any case, economic classes are a relatively recent development in human history; never mind that Marxist theory is not, as Popper claimed, concerned with prophesying the future, but with guiding practice on the basis of present trends and conditions; and never mind that Popper’s falsificationism, as Pigliucci himself tells us, is flawed. Any old argument beats treating the Marxist theory of history with a minimum of fairness and care.

Of course, keeping social history at arm’s length is a common strategy among scientists and philosophers of science, the product, in part, of a fear of relativism that is understandable, but misplaced. While extreme relativists (notably, the postmodernists Pigliucci confronts in one of the chapters) do use social and historical variation to challenge the validity of science, the challenge is not warranted: variation only means that science evolves, at least in broad outline, along with society.

Pigliucci, in fact, does recognize that society influences science; but he gives the impression that the influence is small and mostly negative, a force for biases and blunders rather than also for general advancement. Still, since biases and blunders are indeed how scientists and scholars often experience the corrupting pressures of contemporary society, a critical philosophy and history of science should be of some value to them. For how can scientists help combat popular errors, unless they learn to combat their own?

Pigliucci helpfully discusses one notorious case of socially-induced scientific failure: the eugenic movement that thrived in the first half of the twentieth century. But old errors are relatively easy to identify. Contemporary cases, by contrast, are much trickier, and, for that reason, as well as for their immediate relevance, a better test for philosophy. Unfortunately, this book misses the chance to critically explore two recent instances that have made a big impact on public opinion. First, though perhaps only due to publication deadlines, it says nothing about the 2009 swine flu pandemic, a major, world-wide phenomenon that highlighted the close connection between science, business, and politics, as governments round the world spent large sums in preventive measures and publicity campaigns that arguably succeeded more in alarming the population than in improving health (see Godlee 2010). High-profile stories of this kind play a major role in fostering public suspicion of science.

Second, Pigliucci doesn’t do justice to the climate change debate. Adding to the oversimplification and polarization that usually go with it, he frames his discussion in terms of a confrontation between Al Gore’s book An Inconvenient Truth and Bjørn Lomborg’s The Skeptical Environmentalist. And while he picks holes in both, he is far from even-handed. Al Gore’s alleged errors still mean he ‘got it (largely) right’ (280), while Lomborg’s constitute ‘a highly misleading treatment’ (279). This judgment follows chiefly from a failure to spot the major fault in Gore’s logic: the leap from the undeniable reality of climate change to the highly speculative claim that anthropogenic climate-related catastrophes are threatening to destroy our entire civilization and the very habitability of the planet.

Additionally, Pigliucci makes a similar error himself. Referring to the IPCC’s 2007 finding that it is more than 90 percent likely that man-made greenhouse gasses have caused most of the global warming observed since the mid-twentieth century, he asserts: ‘if you were told that there was a 90 percent probability of your house being wiped out by a storm … you would be concerned, very concerned’ (135). More sensibly, your level of concern would depend on how much you trusted such powers of prediction; but let’s leave that aside. And let’s also leave aside any questions regarding the meaning and validity of the IPCC’s attribution statement (see Curry and Webster 2011). The fact remains that, by comparing the planet to a wrecked house, Pigliucci is jumping to extremely catastrophist conclusions. By logic, a >90% chance that A has caused most of B does not automatically equal a >90% chance that C will be destroyed.

Had Pigliucci looked at the climate change debate as a multifaceted social phenomenon, instead of as a simplistic and Manichaean case of science versus bunk, he might have seen that it actually consists of several different issues, and that the scientific facts are largely irrelevant to them. Science tells us that the climate necessarily changes over time, and that humans influence it, as do animals, plants, and even bacteria. It also tells us that the catastrophic, in true dialectical fashion, becomes normal over the long-term scale that differentiates climate from weather. But the timing, causes, and magnitude of future climate-related catastrophes are extremely hard to predict, for reasons that Pigliucci discusses in chapter 1, but seems to have forgotten by chapter 6. As he explains, natural sciences dealing with historical subject matter (such as geology, evolutionary biology, and, presumably, climatology) ‘perform abysmally when it comes to predicting future events because of the rapidly diverging number of possible outcomes that arises from even a small number of causal factors at play’ (22).

Moreover, as regards the human impacts of such events, the relevant factors are bound to include powerful social and economic influences that are themselves virtually impossible to predict decades in advance, both because of complexity and because our social future lies, to a degree, in our own hands (see Pielke 2010 on how vulnerability to climate varies greatly with economic and social development; and Hulme 2011 for a critique of the fallacy of ‘climate reductionism’). These, incidentally, are the same reasons why social science cannot indulge in the ‘historicist’ prophecy-casting Popper wrongly charged Marxism with. Given the inevitable uncertainties, then, the current inflamed disputes about climate change would appear to concern energy policy, international relations, models of economic management, and citizen access to information: matters that are, at heart, about the conflict of social and political interests, not about climate.

In this respect the climate change debate illustrates the claim that scientific controversies are never just scientific, but ‘formed around and structured by complex ethical and political interests’ (Engelhardt and Caplan 1987, p. vii). Although we cannot know what specific forms such scientific controversies will take in the future, we can quite safely predict that, through them, science will continue to be drawn into the fray of a conflictive and divided world. Therefore, for as long as we live in that kind of world, the philosophy of science will have to pay close attention to the social and the historical, if it wants to promote clear and rational thinking in its own ranks, among scientists, and within the population at large.