Marx & Philosophy Review of BooksReviews‘Ontology and Practice in Marx and Wittgenstein: A Social-Philosophical Inquiry’ reviewed by David Marjoribanks 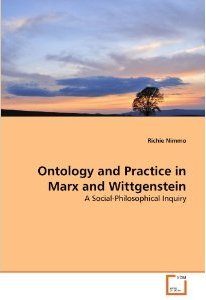 Richie Nimmo
Ontology and Practice in Marx and Wittgenstein: A Social-Philosophical Inquiry

David Marjoribanks is an Associate Lecturer in Philosophy at the University of Kent. His PhD thesis …

The encounter between what are sometimes termed the ‘philosophical anthropologies’ of Marx and Wittgenstein has provided some very fruitful enquiry over the last thirty years or so, although this area remains at some distance from more ‘mainstream’ contemporary Marxism. The work of David Rubinstein (1981), Gavin Kitching (1988), and, more recently, Kitching and Pleasants’ edited collection on Marx and Wittgenstein (2002), have contributed to a small but highly interesting body of literature which brings Marx and Wittgenstein into alignment, with large-scale consequences for understanding Marx. It has become increasingly clear not only that strong similarities and affinities may be found between the centrality that Marx and Wittgensteinassign to social practice and their critiques of reification, but also that reading Marx through the later Wittgenstein, we may reach an expression of Marx’s philosophical materialism more suited to his actual project between idealism and ‘mechanical’ materialism, which avoids the pitfalls of the ‘base’ and ‘superstructure’ and all its unfortunate, crude deterministic, mechanistic and reductive-scientistic implications. It is in this context that Richie Nimmo’s book must be located.

Nimmo’s stated aim is to provide a re-reading of Marx – to ‘rehabilitate’ him from the misreading of him which has prevailed for a considerable time (3). Nimmo claims to offer an alternative reading of Marx, achieved by ‘using’ the later Wittgenstein. This ‘using’, he admits, is only way of reading Wittgenstein, and he does not claim it to be authoritative. However, his contention is that by using Wittgenstein in this not unreasonable way, he can achieve an “extremely provocative and inspiring way to read Marx” (4).

The perceived problem with Marxism, for Nimmo, is essentially a Cartesian dualism. Deterministic Marxism separates a determining object as a ‘base’ called ‘mode of production’ from a determined object as a mere ‘superstructure’ which includes ‘consciousness’. Marx’s materialism, however, argues Nimmo, is a materialism of social practices, rather than of inert objects. The mode of production is therefore synonymous with what Wittgenstein calls a ‘form of life’. This removes the causal connotations of historical materialism. If we read ‘mode of production’ as synonymous with ‘form of life’ (and The German Ideology does, of course, refer to the mode of production as “a definite form of activity … a definite mode of life”), there is no longer any question of conceiving the causal determination of ‘consciousness’ (which can only be conscious being, for Marx) by an antecedent object ‘life’. Nimmo points out that Marx’s use of the mode of ‘life’ can be seen as such an inclusive term to prefigure Wittgenstein’s ‘form of life’, which therefore encompasses consciousness. Consciousness is life; it is not caused by life: as Nimmo points out, there can be no causal relation between two things when one actually encompasses the other (9). We should therefore see Marx as collapsing consciousness into life, not as asserting its causal determination by the latter. Consequently, Marx overcomes the binaries of subject/object, material/ideal, etc., and his materialism ought to be understood as anti-dualistic.

The primacy of the material in Marx, then, ought to be seen as the primacy of social practice. Nimmo brings out the convergence of Marx and Wittgenstein here. Wittgenstein’s critique of reified language mirrors Marx’s insistence on the centrality of social practices for understanding value. Both thinkers, according to Nimmo, oppose misleading abstraction which imagines society as a quasi-object that can be explained in terms of abstract relations.

The problem, here, however, is that Nimmo does not consider the counter-argument that Marx does not simply draw attention to social practices as a whole, but also posits a ‘ground’ of practice, where the Wittgensteinian interpretation leaves us with the ‘groundless ground’ of practices. Marx, at least in places, sees social practices themselves as determined (whether in a causal sense or not) by something else besides practice. For one example, primitive religion for Marx expresses human beings’ state of dependence on nature. It is nature itself here and the undeveloped productive forces, and not merely forms of practice based on these productive forces, which must be grasped to understand primitive societies – and hence primitive religions. Seeing Marx’s materialism as a materialism only of social practices has the advantage that it avoids the dualistic and deterministic connotations which have plagued Marxism, but it seems to risk making all practices equal, at least on the interpretation offered by Nimmo. Surely we want to be able to say that the root is practice, but some forms of practice are more central in historical transformations than others? Can we not, while avoiding economic determinism, nevertheless say that the economic impulsion to find new markets, for example, has a greater explanatory value for understanding imperialism than the social practice of, say, table manners? The Wittgensteinian approach does not commit one to the explanatory equality of all social practices, but in his presentation of it here, Nimmo does not provide any resources for conceptualising some practices as more fundamental.

Furthermore, Nimmo’s ‘re-reading’ of Marx here is not particularly original. It adds little of real substance to the literature I mentioned at the beginning of this review. Rubinstein’s Marx and Wittgenstein, for example, receives only one reference; Kitching’s Karl Marx and the Philosophy of Praxis is missing entirely. Further, the criticism of the dualistic interpretation of Marx is by no means the sole preserve of the Wittgensteinian approach to Marx – the work of Raymond Williams, Stuart Hall, etc. has for a long time dismissed this old, deterministic and overly structuralist interpretation of Marx.

Nimmo does, however, provide an interesting conjunction of Marx’s critique of commodity fetishism with Wittgenstein’s therapeutic critique of reified language: Wittgenstein criticises language which is reified and abstracted from its location in the practical social activities of human beings, where Marx sees social relations between people taking on the appearance of abstract relations between things.

This book also misses the crucial Hegelian interpretation of historical materialism. Although Nimmo cites Marx’s description in the Grundrisse of base and superstructure as an ‘organic union’, he does not seem to realise that this dimension is no new discovery of the Wittgensteinian approach to Marx. While structuralist and deterministic interpretations of Marx seemed to prevail for the most part of the twentieth century, certainly in social sciences, Hegelian Marxists have long known that base and superstructure cannot be conceived causally and atomistically. This absence of Hegel here, however, is largely representative of the Marx and Wittgenstein literature more generally – the really interesting work on Hegel, Marx and Wittgenstein remains yet to be written.

I cannot in this review avoid mention of the publisher, Verlag Dr. Müller, in part for readers, and in part for any authors who might consider publishing their work with them. Not being familiar with the VDM publishing before, I did a little internet research. It turns out that VDM publishing are becoming rather notorious for their mass soliciting of manuscripts from thousands of authors. VDM explicitly specialises in publishing dissertations, theses, and research projects, and their business model involves a team of acquisitions editors, who search the internet for academic authors whose college library has a web-accessible catalogue and invite them by e-mail for their manuscripts (see the Wikipedia article, link given at the end). VDM’s services are free to authors, and the author receives a free copy, making publishing seem an attractive option for recent graduates. However, VDM do not proof-read or peer-review manuscripts, they do not seem to market their books, and their books do not appear in libraries. I only found Nimmo’s book by searching ‘Marx and Wittgenstein’ on amazon.co.uk.

Furthermore, VDM books are very expensive. At £43.00, this particular book costs £1 per page – there are only 43 pages, including the Bibliography, although the publisher has it listed as 56 due to 8 blank pages at the end plus an additional page advertising VDM’s free of charge services for Bachelor’s theses, Master’s Theses, and current research papers. VDM Group’s website claims that the group as a whole release 50,000 new book titles per month, they have 85,000 authors, and are therefore the largest book publisher in the world. However, this is clearly a preference for quantity over quality. American writer Victoria Strauss, describes VDM thus: “VDM, in other words, is an academic author mill.” Any author thinking of publishing with VDM would do well to read her very helpful blog entry (address given at the end), which provides details of VDM’s contracts.

As a consequence of all this, publishing with VDM seems highly unlikely to advance one’s academic career, or even to get one’s work read, given the extortionate costs. That said, many theses do not translate into books easily anyway, so as long as authors expect nothing, publishing with VDM need not be a mistake.

It is, however, rather a shame that the author decided to publish this book with VDM, rather than work on it more and attempt publication with a more reputable publisher. At £1 per page, no one in their right mind would buy this book – libraries included. As a Master’s thesis it is not uninteresting, however, and while it generally lacks originality in substance, there are moments of interesting original argument as well as nicely explained comparisons between Marx and Wittgenstein. These moments could have been expanded into a more substantive monograph on Marx and Wittgenstein. I presume Nimmo changed direction in his studies after completing this Master’s thesis. Had he pursued this direction of study further, with proper engagement with contemporary Wittgensteinian work on Marx, this might have been developed into a more interesting and original book. As it stands, I cannot recommend it due to its price – unless you can get hold of a free copy, in which case it provides a not uninteresting combined reading of Marx and Wittgenstein and a nice, if brief and narrow, summary of the argument for seeing Marx’s materialism as a materialism of social practice.