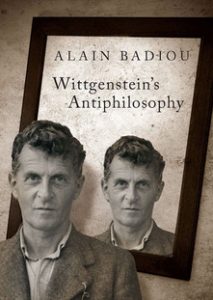 Alan Badiou, currently the professor of Philosophy at the European Graduate School in Saas-Fee, Switzerland, is a prominent representative of what has become known as ‘anti-postmodernist continental philosophy’. His Being and Event (1988, English translation 2005) attempted to combine political thought, set theory, and Lacan’s psycholinguistics. It tried to converge analytic with continental philosophy (with moderate success), and is notorious for its opaque terminology and elaborate rhetoric.

The reviewed volume is composed of two essays by Badiou, ‘Wittgenstein’s Antiphilosophy’ and ‘The Languages of Wittgenstein’, and a lengthy translator’s Introduction (66 pages), by Bruno Bosteels, professor of Romance Studies at Cornell University, and translator of, among other things, Badiou’s other seminal text, Theory of the Subject. This provides ample background to Badiou’s work, to the notion of antiphilosophy, and the origin of the translated texts. The notion of antiphilosophy was revived by Lacan ‘for the purpose of defining the relation of his view of the Freudian field to what has traditionally been handed down to us as philosophy since at least Plato’ (6). Lacan considers philosophy a form of psychosis, which should be kept in mind also when reading Badiou. The translator observes that Badiou’s investigation of antiphilosophy follows his ‘earlier attempt at defining the specificity of the philosophical act’ (13), and quotes the opening lines from Being and Event: ‘Marx announces the end of philosophy and its realization in practice. Lacan speaks of “antiphilosophy”, and relegates speculative totalization to the imaginery’ (22). This line of reasoning finds an interesting coda in the discussion of Wittgenstein’s Tractatus Logico-Philosophicus.

In discussing Wittgenstein, Badiou concentrates especially on the Tractatus, the only major text published during Wittgenstein’s lifetime (referred to as ‘an eternal singularity’ (163) in Badiou’s second essay); and he does not refrain from showing his dislike for the Philosophical Investigations: ‘I do not really like this latter book, and even less so, I must say, what is has become, to wit: the involuntary, undeserved guarantee of Anglo-American grammarian philosophy – that twentieth-century form of scholasticism, as impressive for its institutional force as it is contrary to everything that Wittgenstein the mystic, the aesthete, the Stalinist of spirituality, could have desired’ (70-1). This is a poignant critique of both the Philosophical Investigations, and its lasting legacy in modern philosophy, and the philosophy of language in particular. At the same time the allusion to the ‘Stalinist of spirituality’ betrays Badiou’s unconstrained political rhetoric. Elsewhere in the book, he claims that all texts, notes, and sayings by Wittgenstein other than the Tractatus are only ‘glosses that are ultimately murderous on a single and powerful écrit: the Tractatus’ (158), and ‘the rest, all the rest, it is convenient not to grant … anything more … than the status of an immanent gloss, a personal Talmud’ (76). However, as stressed in a number of more recent studies, Wittgenstein’s work should be viewed as a continuum rather than a radical move from one opposing pole to another.

Interestingly, as we are reminded by Bosteels (60-1), Stanley Cavell, an American philosopher from Harvard associated with the ‘New Wittgenstein’ movement, in his discussion of the ‘counter-philosophical’ tradition lists almost the same names as are mentioned as antiphilosophers by Badiou, however, in the case of Wittgenstein he focuses on the Investigations.

From Badiou’s perspective, for Wittgenstein the antiphilosopher, philosophy is divested of all theoretical pretensions, it is a non-thought, or even a ‘sick and regressive non-thought, because it pretends to present the nonsense that is proper to it within a propositional and theoretical register’ (77). The thesis in the Tractatus of utmost importance for this interpretation is 4.112 ‘Philosophy is not a body of doctrine but an activity’, with its decisive turn from theory to activity. Using terminology from yet another tradition this might be identified as locus classicus for Wittgensteinian ‘philosophy as praxis’.

Badiou returns to this thesis in the second essay, where this crucial thesis, ‘the first axiom, which governs the stylistic trajectory of every consistent antiphilosophy’ (176) is given a modified translation: ‘Philosophy is not a theory, but an act’, enabling Badiou to draw the following conclusion: ‘What Wittgenstein wants to tell us is that philosophy (that is to say, antiphilosophy, or antimetaphysics, it is the same thing) is a non-theoretical speech act’ (176). Whereas the equation of (anti)philosophy with (anti)metaphysics might be seen as an oversimplification, the reference to non-theoretical speech acts offers an interesting perspective (though not developed any further), especially for studies interested in the axiological dimension of philosophical speech acts. Badiou observes that ‘each antiphilosopher chooses the philosophers whom he hopes to make into the canonical examples of the empty and vain shell of a word that for him is philosophy’ (69), and, accordingly, Heraclitus is the antiphilosopher to Parmenides (75), Pascal acts ‘against Descartes, Rousseau against the Encyclopedists, Kierkegaard against Hegel, Nietzsche against Plato, Lacan against Althusser’ (69). The interesting question (perhaps unsurprisingly not even asked by the author) is connected with identifying the philosopher(s) against whom Wittgensteinian antiphilosophy is oriented. Definitely one might name here Bertrand Russell; and from this perspective one is also tempted to propose, in a blatantly anachronistic manner, that Wittgenstein the antiphilosopher acts against his own later philosophy: the antiphilosophy of the Tractatus being directed against the philosophy of the Investigations. However, a better clue might be provided by Socrates in his act (encompassing both life and teaching) against Athens, against the State. Wittgenstein, as it is clear from the Tractatus, from its preface to its last thesis, acts against philosophy, or rather, as Badiou pronounces, in the closing remarks of the first essay: ‘Henceforth Wittgenstein the antiphilosopher is delivered over to philosophy’ (157).

The second essay, on ‘The Languages of Wittgenstein’, offers a loose collection of remarks on ‘Wittgenstein’s rhetorics, or, the internal variation of a philosophical, or antiphilosophical, stylistics’ (161-2). Badiou claims here that ‘the syntax of the Tractatus, as infinite solidity, derives from two principles’ (166), namely, a principle of integral affirmation, and a principle of montage, codified by the numbering. On the other hand, the ‘semantics of the Tractatus does not escape the rule of equivocal variation’ (167). Since ‘every nomination is suspended by the montage between its side of truth … and its side of value … Wittgenstein’s language is subjected from within to a terrible torsion’ (168). It is not easy to follow this line of reasoning, and it is not necessarily fully rewarding (either philosophically or antiphilosophically).

The two essays should come as no surprise for readers acquainted with Badiou’s style and argumentation, which offers both ingenious interpretations, as well as meanders of thought difficult to follow; however, for readers accustomed to more conventional Wittgensteinian scholarship these texts might offer quite a challenge. Though Badiou’s studies fall outside the mainstream of research into Wittgenstein’s philosophy, they are thought-provoking and contain bold statements and innovative interpretations. Also the comparison of Nietzschean and Wittgensteinian (anti)philosophy is quite convincing. On the periphery of this comparison, Badiou makes an important remark on the shift from ‘truth’ to ‘sense’: Wittgenstein participates in the powerful tendency that, in the twentieth century, has sought to depose truth in favor of sense’ (106), a tendency important for antiphilosophy. It might be added here, that this shift, from truth to sense, and later to the mind, is characteristic of the successive turns in twentieth century philosophy of language and philosophy of mind.

On the other hand, Badiou seems to misinterpret certain important methodological assumptions present (though not necessarily explicitly) in Wittgenstein’s earlier and later work, such as, for example, those regarding mathematics and psychology. He states that ‘as the late Wittgenstein becomes a sophist, the essential procedures consist in relativizing, suspending, anthropologizing mathematics, making it into a conventional game’ (138), also the claim concerning Wittgenstein’s ‘contempt for mathematics’ (71) is definitely too strong, especially from the perspective of the psychological turn of Wittgenstein’s later philosophy. Badiou also underestimates the ethical dimension of the Tractatus. Very characteristically, he interprets thesis 6.421 (‘Ethics and aesthetics are one and the same’) as the ‘archiaesthetic act’, as if attributing far less importance to the ethical (or even ‘archiethical’) act.

Somewhat inadvertently, the two essays clearly demonstrate that the work of Wittgenstein, and especially his Tractatus, still offers an intellectual challenge, it is open to interpretations and re-interpretations (not to mention misinterpretations), and constitutes a rich source for philosophical (and antiphilosophical) speculations and controversies.