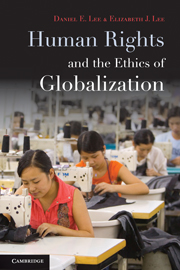 Daniel and Elizabeth Lee argue that in our current global economy, it is the role of businesses to police themselves and deal with the ways in which they impact society, rather than an outside authority, such as a local government or world body. In the book, the Lees seek to understand how it is possible, in a globalized economy, to retain an idea of human rights while still being bound to our current economic system. Citing a number of examples, the Lees take their readers on an interesting, but in the end, rather unsatisfying journey around the world in search of how we ought to view ethics in a globalized economy. Shifting back and forth between proposing solutions and criticizing solutions proposed by others, the Lees do not, in the end, develop an ethics to deal with human rights in a globalized economy other than to suggest that we should all trust that multinational corporations will do the right thing.

The book begins with an overview of how one ought to address issues of human rights, including, but not limited to, what the language of human rights actually means. By providing their own definition of human rights, the Lees do avoid some of the pitfalls of talking about human rights, specifically avoiding a too general definition that could include many rights that most people would talk of as civil rather than natural. As stated, their definition consists in seeing human rights as negative rights, which would be the typical definition of natural rights seen in contrast to civil or conferred rights (positive rights). The Lees provide a somewhat Aristotelian account of the responsibility one has to others and the community, which seems to fly in the face of the purely market oriented economic model they are working with in the book, and this is a point that I willillustrate when approaching the case studies.

The Lees do lay out a list of “ethical guidelines” for businesses based on the formulation of Kant’s categorical imperative, that humans are never to be seen merely as means to ends. Included are such principles as that businesses should not be merely profit driven; there ought to be some kind of mutual seeking of the common good for all involved in the business, whether as workers, shareholders, or the local community. Further, continuing the means/ends discussion, they argue that businesses ought to hire workers (for example, someone to rake leaves), not merely to clean up all the leaves, but also to give that worker a sense of worth and dignity. The responsibility a company has to its customers comes up when looking at advertising, and so the Lees propose that for a successful business ethic, businesses ought to avoid advertising campaigns that denigrate the dignity due to people. But, it is the section on worker’s rights that garners the most attention, especially since so many of the case studies focus on these issues. The Lees propose that not only should workers be given fair wages and not be treated as mere means to ends, they should also be given more freedom and opportunities to effect change within the company by allowing them to flourish as persons. Again one finds the Lees using Aristotelian language to convey an important concept in their analysis of business ethics.

Now, there are four examples that the authors discuss so as to better understand the practical implementation of their ideas. These case studies are that of investing in China, Firestone’s involvement in Liberia, free trade, fair trade, and coffee in Ethiopia, and U.S. companies that use low wage Mexican factories to make a larger profit. In the case of investing in China, the Lees write that despite the rampant number of serious human rights abuses in China, it is still possible to invest ethically in the economy as long as one follows principles such as those they lay out in the business ethic. This claim seems to fly in the face of everything they write about in regards to means/ends relationships and not being merely profit driven in one’s business endeavours. It does not seem possible for the Lees to make a valid case that as long as the investors are acting ethically, somehow they can ignore the illegitimate marginalization of the underpaid workers.

Now, in the Liberian example the Lees illustrate how the Firestone Company has been accused numerous times of human rights abuses, but, according to the Lees, since the company provides Liberia with thousands of jobs, it would not be helpful for Liberia’s economy if Firestone is forced to withdraw. It is not clear to me how this line of reasoning is consistent with the business ethic that the Lees claim to follow, especially in regards to much of the Aristotelian language they employ. Instead of being concerned here about workers and their families, the Lees put most of the focus on the economic impact of Firestone in Liberia, without regard to the impact on the workers general welfare.

In the example of free trade and fair trade coffee production in Ethiopia, the Lees do admit that without some form of regulation, workers and growers will likely be treated unfairly by multinational corporations merely seeking a profit. So, as illustrated in the case study, the Lees argue, rightly, that only with the rise of worker-run cooperatives will workers be able to find the dignity and respect they deserve in both their work environments and in their quality of life. Now, contrast these ideas with those highlighted in the case study of low wage Mexican workers. Those who work in the maquiladoras may be making more than the minimum wage laws of Mexico require, but this does not mean that their wages are just or sufficient for making a living. Furthermore, in addition to issues of economic justice, these workers are victims of environmental injustice since they are routinely subjected to harmful conditions under which no one should have to work. Despite this information, the Lees still claim that not all maquiladoras are harmful, and that they still provide economic opportunities for their workers.

In the end, instead of seeing how unjust the current global, market-driven economy has been for workers around the world, the Lees try to develop an ethics that takes the system as something that we cannot change. By taking the current global economic model as the norm, however, the Lees are clearly unable to get anywhere in their discussions of human rights, since the system is inherently flawed. It is for this reason that the Lees, when confronted with economic and environmental injustices, are still able to see a bright side to the problem. Overall, they do not succeed in developing any new business ethic, since they do not recognize the problems inherent in the global economic system. While the book is an interesting take on human rights and globalization, it does not offer any substantive solutions to the current problems.