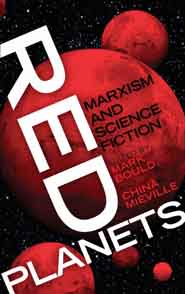 Philip Cunliffe is Senior Lecturer in International Conflict at the University of Kent. …

Although sub-titled ‘Marxism and Science Fiction’, this collection exemplifies nothing so much as the decadence and introspection of modish cultural studies and literary theory in the Anglo-American academy. The collection is loosely organised as a half-response to what editor Mark Bould calls the ‘Suvin event’ – a famous 1979 account of science fiction given by Darko Suvin, who strongly distinguished science fiction from fantasy fiction. Suvin contrasted how science fiction (SF) enabled estrangement from contemporary society, while fantasy fiction was more conservative in its validation of romantic and past idylls. But the real theme uniting this series of short academic essays is their limp argumentation, academic introspection and the range of arcane, knowing references to fashionable theorists. A science fiction fan interested in exploring some of the social and historical dynamics of the genre or examining, say, the political commitments of a favoured SF author, will find little beyond academic verbiage. On the other hand, a student of society interested in SF as an artefact of that society will find little beyond the usual flimsy concepts – ‘hegemony’, ‘otherness’, etc. – that could be found in pretty much any cultural studies discussion.

The standard manner of most of these essays is to lay out in detail the plot or structure of a science fiction piece of work, whether a novel (such as Jules Verne’s Twenty Thousand Leagues Under the Sea) or film (such as Wim Wenders’ Until the End of the World), replete with extracts and quotations. This is then set against some brief discussion or extracts from some in-vogue theorist such as Alain Badiou, Louis Althusser or Slavoj Žižek, or alongside some ramblings about global capitalism and ideological structures. Parallels are then drawn between the SF work under discussion and a theory in order to show, for example, that a scene from a film mirrors the quintessence of hyper-globalised networks of information capitalism, or ideologically reproduces the structures of hegemonic neo-imperialism. Or something. Stripping back the layers of esoteric so-called theorising, the underlying points are slight, banal and uniform: science fiction is an artefact of modern society, and books written in particular periods reflect the concerns of that period.

Some of the essays offer the gleam of an intriguing thought or premise. Steven Shaviro’s essay, for example, suggests that futurologist Ray Kurzweil’s idea of the Singularity – a radical technological leap into a post-human society with artificial intelligence – is a fantasy reflecting capital as a social relation beyond conscious human control. This point is unnecessarily threaded through a recounting of SF author Charles Stoss’ work. China Miéville’s concluding essay seeks to question Darko Suvin’s distinction by making the case that fantasy fiction can function as well as SF in achieving the cognitive estrangement said to be the progressive basis of the latter. Both essays are, unfortunately, cast in the same register of convoluted cultural studies categories, and neither is sufficient to justify the price of the collection. The less said about the weaker contributions to the volume the better. The single best thing about the collection is the appendix, including an annotated bibliography of ‘left SF’ books and films – but again, hardly sufficient to warrant the price of the volume.

The variety of authors gathered together in this collection, and the range of books and films that they discuss, cannot compensate for the sheer homogenising tedium of cultural studies and its failure to grasp hold of anything defined and specific. A cross-disciplinary collection based in more rigorous disciplines such as literary, social and cultural history would have been more effective in exploring the origins of SF – assuming it offered, say, a sociological profile of its readership, attempted to measure its political influence in particular periods, and tracked the biographies of some of its leading figures. As it is, this volume has little to commend it.