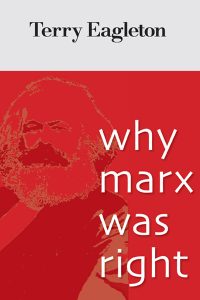 Terry Eagleton
Why Marx Was Right

Humor is not a trait generally taken to be the hallmark of Marxist political writing. Especially when it comes to the field of apologetics, the defense of Marxism against its many critics and detractors, and the necessary basic exposition required to bring such an enterprise to a meaningful conclusion, such works make for notoriously dreary and uninviting reading. This is why Terry Eagleton (Distinguished Professor of English Literature at Lancaster University and Notre Dame University) stands out from the pack. Where the large numbers of explanatory tracts defending Marx and his intellectual tradition piled up in the 1890s or 1970s now go largely unread, his recent publication Why Marx Was Right is designed for a wide audience and deserves one. With flair, sparkling wit, and no fear of vigorous rebuttal, Eagleton’s book seeks to address some of the most often heard criticisms of Marx and Marxist thought. In no particular order, he addresses ten of these, and they are indeed some of the most major and persistent ones: Marxism believes in the all-powerful state, Marxism’s idea of class is outdated in modern society, Marxism is unacceptably violent, Marxism has a history of failure, Marxism reduces everything to economics, and so forth. These arguments will be familiar to any socialist who has been confronted politically by more naive friends or family members, and Eagleton has done us all an excellent service in refuting these with wit, learning, and intelligence.

To defend a theory is always in a sense to explain it, and this is what Eagleton does well. While of course there is virtually nothing in Marxist theory that has not been challenged from the inside, or taken up as true by theorists not calling themselves ‘Marxist’, Eagleton can be said to stick fairly close to what has become accepted as the Marxist canon, at least among Western intellectuals. This is not entirely without its debatable choices: he takes no trouble at all to defend any of the historical experience of ‘real existing socialism’ in countries like China or the Soviet Union, and dismisses them in tones not dissimilar to those familiar in right-wing historians. Similarly, it is clear Eagleton’s main interest within Marx’s thought is in the political and cultural theory, befitting his own intellectual background; some may well object to his neglect of critiques situated more definitely in economic theory. One does not hear much of the theory of value in this book. But I think this can be justified by the fact that Marxism as a political movement stands or falls by the degree to which it can convince people of the possibility of socialist revolution, not as a certainty, but as an educated guess; and such a judgement will ultimately not depend on the ‘grey on grey’ of economic theory, which most people consider as boring as it is odious. Eagleton is more notably in his element when discussing the place of Marxism in thinking about the history and future of our shared cultures. The passages in the chapter on determinism, where Eagleton discusses the tragic nature of the Marxist theory of history – our inability as humans to overcome these tragic aspects while our recognition of them allows us hope – are some of the most moving in the book.

Giving one’s book a title like Why Marx Was Right is of course to invite controversy and criticism, and there is indeed room for some critique even by those who are not inclined to dismiss the idea outright. The format, refuting common criticisms of Marx, is a very useful and practical one, and this will ensure the book a more lasting readership than yet another Marxist explanation of this or that aspect of economic crisis perhaps would. But it also sets the work up for some confusion of subject. Eagleton is not always clear whether his book is a defense of Marx’s writings, of Marxism as an intellectual tradition, of Marx and Engels both, of Marxist politics, or just the inspiration provided by Marxism to others. Likely these cannot be wholly separated, and all of them are important for a full understanding of ‘what it’s all about’, but a critic less sympathetic to all of the above than me might well point out that this allows him ample room for elision between Marx, Marxism, and the history of Marxist politics in practice, where Eagleton can shift from the one to the other depending on which of them puts the subject matter in a better light. This is not consciously dishonest, but it is something which those hostile to Marx and Marxism will not fail to notice. In particular his outright dismissal of the relevance of the Soviet or Maoist experiences and his easy condemnation of them look somewhat odd when he is equally ready at times to defend the record of Marxist politics in supporting the rights of women and minorities, in supporting anti-colonialism, and so forth. A hostile reader will point out that one cannot have it both ways; and while I believe there is in fact a possibility of having it both ways, that involves a much more extensive and nuanced dealing with the history of Marxism as a political movement than this book allows. It would perhaps have been better to stick strictly to theoretical questions, all the more since Eagleton is clearly very good at dealing with those in a way that is accessible, lively and humorous without being ‘dumbed down’. Not all his analogies to modern politics or pop culture are equally successful, but one can readily imagine giving this book to that cranky conservative uncle or a family friend, something not easily said of, say, Lenin’s collected works.

On the whole, then, this book is equally an easy read as it is enlightening and challenging, and that is a major accomplishment for the author. Even veteran Marxist thinkers will find Eagleton’s discussions of Marx’s views on subjects like historiography, man versus nature, class intersectionality, and the ‘superstructure’ refreshing and rewarding. Even with the scant attention to questions of economics, that Eagleton has managed to deal with ten major issues in Marxist political and historical theory with a reasonable degree of subtlety in barely 250 pages is impressive. It is therefore all the more regrettable that the publisher failed to provide for a useful table of contents: there are only page numbers given for the chapters one to ten, but no description of the subject of each chapter until one comes to it. This diminishes its utility as a theoretical reference book. On reading the two-page conclusion, few readers will escape the impression that Eagleton has not so much resolved the internal contradictions in Marx’s thought as simply taken the best of both worlds in each case, and presented it as the Marxist view. But this means equally that for each of the major criticisms of Marxist theory, the hypothetical critic is refuted by an eloquent and effective answer. No-one bent on dismissing Marxism outright will be wholly satisfied by this, and no veteran Marxist will be entirely in agreement with it. But Terry Eagleton has taken much of the best the Marxist tradition has to offer in thinking about class, nature, revolution, history, and many such grand subjects, and summarized it briefly with clarity, intelligence, and a sense of humor. And for this he deserves our thanks.