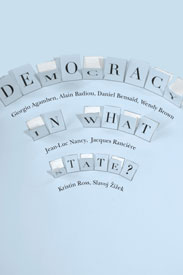 Almost everyone wants to think that they aspire to democracy, but very few have a reflective and critical take on what democracy really is. We live at a time when people seem to think that ‘history’ has ended, and such finality is what many consider as ‘democracy’. In this regard, it seems that everybody can be called a ‘democrat’, so to speak. But, is that really so? In this slender volume, there is an ambitious and commendable attempt to assemble the Western world’s leading radical thinkers in one forum to deal with the question: “Is it meaningful to call oneself a democrat? And if so, how do you interpret the word?” The contributors have unleashed their radical analytical powers with two results: first, uncovering the inherent weaknesses of the current conceptions and practices of democracy, and second, the rebuilding of new and imaginative possibilities for an authentic and emancipatory politics.

The inherent ambiguity and flux in today’s understanding of democracy is self-evident. Agamben, in his short introductory chapter, admits the equivocal nature of the term, underscoring how its meaning is utterly indeterminate. In the same breath, Brown also concedes to the unprecedented global currency of the notion of ‘democracy’, and thus making the term “conceptually footloose or substantively hollow” (44). A more incisive diagnosis comes from Nancy, when he points to how democracy is an archetypal case of the “loss of power to signify”, resulting in it being “no longer capable of generating any problematic or serving any heuristic purpose” (58). In other words, today’s understanding of democracy is akin to putting almost everything in one basket, or as Nancy (58) proverbially describes democracy: “everything – politics, ethics, law, civilization – and nothing”. Stated differently, democracy appears to be everything, and as a result becomes nothing. It is through the process of persistent casting of ‘democracy’ in a kaleidoscope of multiple interpretations that its core meaning vanishes.

This volume commences with Agamben’s provocative call to linguistically and conceptually untangle the knotty problem behind what the “Western political system”, or more broadly, what politics really is. Thus, he distinguishes its two distinctive components: first, as a “politico-juridical rationality” or a “form of constitution”, and second, as an “economic-governmental rationality” or a “form of government”. To put it another way, the hegemonic understanding of democracy has been focused mainly upon the structural formalities on how to govern, rather than on the best way to govern and advance public interests. This is a crucial point, particularly with the struggling and failing political systems in the Global South, where strongly entrenched elites generated by the colonial past have instrumentally used “politico-juridical rationality” to legitimize their hold on political power with the over-arching goal of furthering their own interests. In this way, democracy’s quintessential goal of emancipating the human individual vanishes in reality, since it not only fails to achieve this goal, but also perpetrates socio-economic injustices and human suffering. Insightfully, Agamben reminds us that “the central mystery of politics is not sovereignty but government” (4), and thus suggests how democracy must be lived in order for humanity to reach its potential, and not to be a mere exercise for generating the empty abstractions that the entrenched hegemons invoke to justify their power.

Agamben’s argument is further developed, albeit unintentionally, by Brown when she explains the dynamics of democratization of society under the aegis of neoliberalism. In the current situation, Brown argues, neoliberalism strips off the essential spirit of democracy (47):

Neoliberalism as a political rationality has launched a frontal assault on the fundaments of liberal democracy, displacing its basic principles of constitutionalism, legal equality, political and civil liberty, political autonomy, and universal inclusion with market criteria of cost/benefit ratios, efficiency, profitability, and efficacy.

A case in point, according to Brown, is the way in which elections become “circuses of marketing and management, from spectacles of fund-raising to spectacles of targeted voter ‘mobilization’” (47). Thus the marriage of neoliberalism and today’s so-called democracy functions as a cloak that hides the social mess that capital has created, in the same way that the formal-institutional processes of neoliberal democracy ritualize the legitimating claims of capital and its adherents to power and domination. Nancy likewise tackles the difference between democracy conceived as a form of rule and as a finality in which he argues that authentic politics must be considered as the “locus of access to possibility of ends” (75). This, ultimately, implies that democratic politics is not an end-in-itself but rather the macro-social means of expanding the micro-social ways of determining one’s finalities, ends, and being-for-oneself. Hence, it rejects totalitarian and highly determinative politics, and upholds instead an emancipatory and empowering politics that provides individuals with the minimum means to determine their ends. Acknowledging that contemporary democratic practice has resulted in oppressive hierarchical relationships, Ross insists that “democracy must be reinvented” (99).

In the light of these points, what kind of democratic politics should we embrace? Agreeing with Jacotot’s principles, Ranciere argues that “equality exists in actuality”, which means that it must always be conceived as a presupposition and not as an ultimate goal that one must strive to attain. Likewise, democracy, in its essentialized form, is “irreducible to either a form of government or a mode of social life” (76). In more concrete terms, the most provocative and straightforward suggestion probably comes from Zizek in his concluding chapter when he refers us back to Rosa Luxembourg’s thinking: “When Rosa Luxembourg wrote that `dictatorship consists in the way in which democracy is used and not in its abolition,’ her point was not that democracy is an empty frame that can be used by different political agents, but that there is a “class bias” inscribed into this very empty (procedural) frame.” He thus reminds us that radical democratic politics is not only about changing the formal rules of the game, or their predecessor’s oppressive language-game of politicking; rather, it involves transforming “the entire logic of the political space, to guarantee the hegemony of their base” (120), and thus entrenching the “class bias” of authentic radical democratic politics.

This collection reminds us of two critical issues in contemporary politics. First, the untrammeled hegemony of neoliberalism both in the Global North and South has made regime stability across all regions an absolute chimera. The sharp material inequalities within and among countries have created tensions between the haves and the have nots, bringing the entire macro-social structure under the rubrics of insecurity, disequilibrium, and injustice. What makes it worse is that the already entrenched material inequalities in the Global South as a result of the bloody colonial past has been exacerbated by today’s hegemonic gospel of a lean electoral democratic state and a powerful capitalist market. In this context, the political freedoms granted by an electoral liberal democratic state are only a legitimating paradigmatic exercise through which capital and its agents solidify their hold on power, at the same time marginalizing more pressing issues of economic freedom, and even the very survival of the impoverished majority. Second, even the capital-rich West has not been spared from the destructive wrath of neoliberal democracy, let alone how material injustices are being perpetrated by a handful of cold-blooded global capitalists. When liberal democracies codified into the legal system the legitimacy of neoliberalism, greed and unfettered capital accumulation have been at the core of the game. But when the game became messy, capitalists asked for divine intervention, and so the liberal democratic state entered the scene. This resulted in billions of hard-earned cash from the middle-class and labourers being used to rescue these greedy capitalists. The strangest thing of all is that – for the second time – the liberal democratic state has even connived with capitalists in the name of austerity politics. Needless to say, liberal democracy is in its deepest crisis right now, and is even in danger of self-destruction.

As we are all sucked into a whirlpool of problems about the best way to live and to actualize an authentic democratic politics, Democracy in What State? is a timely and thought-provoking collection that shows that radical thinking and the politics of dissent are more than ever necessary in order to create a different kind of politics. Perhaps what most makes this book admirable is its attempt to start the dialogue that will rattle the sacrosanct cage of liberal democratic thinking. This is obviously not yet the time to pop the champagne corks, but what this volume does is to stimulate our creative imagination and reflective thinking in order to generate new possibilities for a truly emancipatory politics.