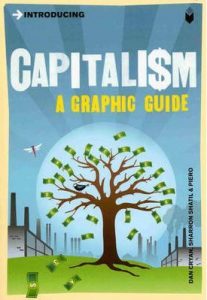 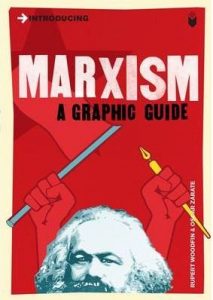 Julia Smith is a doctoral student at Trent University in Peterborough, Ontario, Canada. Her …

In recent decades, graphic works have become an increasingly popular format by which to educate people on a variety of topics. As such, today one can find graphic introductions on almost everything, including fractals, quantum theory, Buddha, and Ludwig Wittgenstein. Two recent additions to the graphic field come from the Introducing series published by Icon Books in the United Kingdom, and are particularly relevant to those interested in Marxism: Introducing Capitalism: A Graphic Guide and Introducing Marxism: A Graphic Guide. In providing a graphic approach to the study of these two important and rather daunting topics, both books serve as accessible introductions to their respective subjects. Moreover, analyzing the books alongside one another reveals some of the strengths and weaknesses of the graphic approach, and highlights the fact that when done well, graphic works can be an effective and powerful way of introducing readers to complex theories and ideas.

Introducing Capitalism provides the reader with a broad overview of the development of capitalism as told through the words and ideas of some its key proponents and critics. The book starts by defining capitalism as “the name of a family of economic systems based on the private ownership of the means of production and trading goods for profit.” (3) It then traces the roots of capitalism, arguing that “modern capitalism began in the Middle Ages with the rise of the merchant class.” (4) In analyzing the transition from feudalism to capitalism, the book looks at the Crusades, the Renaissance, and the formation of the Dutch East India Company as significant events in the increase of international trade and banking, which in turn facilitated the development of capitalism in the Western world in the fifteenth and sixteenth centuries. Introducing Capitalism next examines important thinkers in the history of capitalism, including Thomas Hobbes, John Locke, Adam Smith, David Ricardo, John Stuart Mill, and Karl Marx. Although the book discusses the theoretical contributions of all of these thinkers, it pays particular attention to those of Marx, devoting almost twenty pages to the discussion of his ideas of historical materialism, surplus value, and class struggle. This section of the book ends with a look at the continued development and theorization of capitalism throughout the twentieth century, focusing on the ideas of John Maynard Keynes and Milton Friedman in particular, and arguing that “what limits to set on public spending is still one of the major debates in capitalist thinking today, and it forms the rough dividing line between right- and left-wing political thought.” (123) The final fifty pages of the book examine the cultural effects of capitalism. Looking at the arguments of cultural critics ranging from Max Horkheimer to Robert Nozick, the book argues that cultural critiques of capitalism have come from both sides of the political spectrum. Introducing Capitalism sums up its analysis by arguing that “capitalism continues to spread untouched by all this theorizing” (168), and uses the recent example of the development of banking that conforms to Islamic law as evidence of both capitalism’s “flexibility and, by extension, its instability” (170). The book ends somewhat abruptly by highlighting capitalism’s fundamentally unstable nature, stressing that market “corrections” are a permanent part of capitalism that “at their worst … can devastate the global economy, bringing poverty and hardship to millions.” (171)

Introducing Capitalism works well as an introduction to the history and development of capitalism. The book’s text is written in simple language and accompanied by intricate and haunting illustrations that fit well with the ideas presented. Only 175 pages long, Introducing Capitalism covers a great deal of material, and though some topics are only briefly discussed, the final pages contain a list of additional sources for those who wish to do “further reading.” Still, Introducing Capitalism contains some weaknesses, the most notable being its scant discussion of colonialism and slavery and their role in primitive accumulation. In addition, the book lacks a gendered lens, failing to examine capitalism as a gendered system or how feminists have critiqued capitalism. Obviously one must not expect the same depth of analysis that a scholarly monograph might provide; however, issues of such significance surely merit more analysis than is provided in this instance. Indeed, one would not want to conclude that the omission of important aspects of analysis is a necessary consequence of doing graphic work.

Focusing on Marxist thought in particular, Introducing Marxism gives an overview of the historical development of Marxism, also using the words and ideas of important thinkers. To establish the importance of Marx, the book begins with the publication of one his most well-known works – The Communist Manifesto, stating that “the Manifesto left an indelible mark on human progress and still today forms the basis for a system of political beliefs that motivates millions.” (4) Following a brief account of Marx’s life, which highlights his early passion for philosophy, his life as a political agitator, and the importance of his friendship with Friedrich Engels, Introducing Marxism looks at Marx’s philosophical, economic, and political theories, including dialectical materialism, surplus value, and class struggle. Devoting approximately seventy pages to an examination of Marx’s theories, the book ultimately concludes that although “Marxist theory seemed rigorous, logical, and optimistic … more or less all economists today believe Marx’s theory seriously flawed, or, to put it bluntly, wrong.” (72) The next section of the book looks at the influence of Marx’s ideas after his death in 1883, focusing almost exclusively on the Russian context. Against the historical backdrop of the Russian Revolutions, the book examines Lenin and Stalin’s adaptations of Marx’s theories, arguing that both leaders inverted Marxist theory to suit their own political purposes. This section concludes with a brief discussion of “Third World Marxism” and the claim that “by the mid-twentieth century, it became clear to most observers outside the Communist Bloc that classical Marxist theory had failed” and that “the most likely flaw was in Marxism’s’ economic determinism.” (118, original emphasis) The final section of Introducing Marxism looks at various attempts to “rethink” Marxism in the twentieth century, both by those working within the Marxist tradition and those influenced by postmodernism. The works of Antonio Gramsci, members of the Frankfurt School, Louis Althusser, Stuart Hall, Frederic Jameson, Jacques Derrida, and Ernesto Laclau and Chantal Mouffe form the focal point of analysis. The book awkwardly concludes with a blunt “10-point criticism of Marxism in our postmodern world” and the ominous words: “to be continued …” (170).

Though Introducing Marxism touches upon many important aspects of Marxist thought, several weaknesses detract from its value as an introductory text on Marxism. Most notably, it does not make a clear argument about Marxism. Instead, the book meanders through various developments in the history of Marxist thought, the author’s own voice often bleeding into the words of the thinkers it is examining, leaving the reader confused as to whom specific ideas belong. Graphic works often omit footnotes and parenthetical references in the interest of space and aesthetics; however, a stylistic preference does not alleviate the authors’ responsibility to clearly indicate original sources when discussing the ideas and works of other people. This is especially important in an introductory text: as information is presented in brief, readers may wish to do further reading on a particular idea and thus it would be helpful to be able to clearly identify the original source. In addition, Introducing Marxism also devotes a great deal of attention to Russian forays into Marxism, rehashing many of the same old tired stereotypes about Marxism as being limited by economic determinism and forever marred by tyrannical Soviet leaders. While these actors and events obviously mark important stages in the historical development of Marxist thought, one wonders whether they merit as extensive attention as they are given, especially when other noted Marxist thinkers are completely overlooked, among them literary critic Raymond Williams, sociologist Ralph Miliband, and historians Eric Hobsbawm and E.P. Thompson. These omissions are particularly egregious given that these scholars were integral to the “rethinking” of Marxist thought in the post-World War II period and that several of them notably split with the Communist Party in the 1960s over the very types of Soviet policies that Introducing Marxism uses to declare classical Marxist thought a failure. Given the broad influence of these scholars both within the academic world and beyond, the book would have been strengthened by some discussion of their works and contributions to the development of Marxist thought in the twentieth century.