Marx & Philosophy Review of BooksReviews‘Radicalism in French Culture: A Sociology of French Theory in the 1960s’ reviewed by David Winters 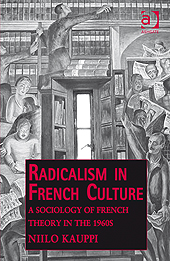 Niilo Kauppi
Radicalism in French Culture: A Sociology of French Theory in the 1960s

David Winters is a freelance writer of literary criticism and theory. He blogs at …

Barthes. Deleuze. Lacan. Foucault. What we now know as ‘French theory’ too often appears as a reified procession of names, or of concepts uprooted from contexts – canons of thought uncoupled from what could be called, after Pierre Bourdieu, their constitutive ‘fields’. In this respect, the Anglophone reception of continental philosophy tends to take place against a background of unquestioned idealism, or uncritical abstraction. Against such accounts, Niilo Kauppi, himself a former student of Bourdieu, has written a rich sociological study of the workings of knowledge production in Paris in the late 1960s, reconnecting familiar names and ideas both to each other, and to the fabric of the field that enabled their interaction.

For Kauppi, French intellectual life in the 60s was framed by a field in mid-transformation. In this light, he writes, the rise of a distinctive theoretical ‘style’ in the run-up to 1968 should be seen as serving an emergent social demand for radicalism, during a period when the country’s university system was rapidly expanding, and when changes in the scale of book production had buttressed a market in which ‘avant-garde works could paradoxically become best-sellers’ (18), at least for a while. Under such conditions, a collective tendency of thought, a Weltanschauung, was able to gain traction. The worldview in question was, of course, ‘structuralism’, understood by Kauppi as a legitimising tactic, an attempt to confer fully ‘scientific’ status upon the relatively speculative intellectual practices of the social sciences and humanities.

Indeed, Kauppi reads structuralism not as one idea among others, but as a privileged ‘power-idea’, an ‘intellectual metapreference’ charged with organising and underwriting whole sets of subordinate concepts (3). Crucially, moreover, ‘power-ideas cannot be proven true or false’ (119), which is the principal proof of their power. In other words, when ideas acquire social force they do so not because of their veracity, but only insofar as they are able to propagate themselves, to mobilise networks of neighbouring ideas, and thereby to resonate with a maximal number of whichever actors and institutions matter most in the field. It is in this sense that Kauppi describes the early years of theory as a ‘symbolic arms race’ (46) in which rival paradigms spread like viruses, the totemic names of theorists functioning as ‘nodal points of social networks’ (32). One might say that an accelerated form of this logic still structures the field of theory today, driving, for instance, such online ‘movements’ as speculative realism.

In any case, part of the originality of Kauppi’s account lies in his decision to grant central roles to Philippe Sollers and Julia Kristeva – in his words, ‘the new generation’s Sartre / de Beauvoir’ (60) – and to make Tel Quel his focal institution, where others would choose, say, the École Normale Supérieure. In so doing, he persuasively claims that the nurturing matrix of theory lay outside of professional academia, or at least on its margins, in the eccentric orbit of a journal that forged a brief yet fertile ‘fusion of political and theoretical avant-gardes’ (48), and whose youthful readership demanded rebellion. Sollers was also an expert networker, proselytising in all the right places for what would become the period’s signature style – a ‘critique of the representative function of language’ (50) and an elevation of ‘the text’ to ‘an all-encompassing … metaphysical principle’ (31).

The crux came, Kauppi says, when Sollers’ textual fetishism dovetailed with Kristeva’s structuralist ‘science’, or rather her ‘meta-science’, for structuralism’s standing as a power-idea relied on its role as a measure of ‘the scientificity of other sciences’ (29). The sociological insight here is significant: a specific brand of structuralism (of which Kristeva should be seen as the epitome) was able to accrue social capital precisely because of its rhetorical claims to universality, and its habit of placing those claims a priori to any opposing arguments. Once this ostensibly unassailable style of thought fell in line with the Left through Tel Quel, the stage was set for a ‘science of the text’ which would appeal to intellectual and political radicals alike. However, this very appeal set up a series of contradictions, foremost among them a naive conflation of ‘writing with concrete political action’ (61). If typically Telquelian attempts to equate the interior work of the text with actual labour (or to depict revolution as a formal phenomenon) had built the associative links that brought theory to prominence, they also posed the problems that drove it to dissolution.

Structuralist strategies can likewise be seen in Derrida, whose style provides a perfect example of theory’s rhetorical bid for legitimacy. Here, again, a body of thought is fortified by means of semantic chains; in this circular economy of signs, concepts are mutually reinforced by making them metaphors for each other. In this respect, Derrida’s armoury of quasi-synonyms (différance, supplement, trace, and so on) exists to serve a strategic need; its role in the social life of theory is to render a certain style of discourse (‘deconstruction’) immune to proof or refutation. Every concept that Derrida coins guarantees every other, in a generalised equivalence that cannot be challenged. A careful rhetoric of ‘concession and reservation’ (86) ensures that this tactic is never revealed as a buried enactment of power. What is more, deconstruction takes care to create false needs for the concepts it calls on itself to deploy, thus granting its ideas an appearance of explanatory value, but only within the logical limits of ‘a pre-determined script, the outcome of which is already known’ (88).

Thus, the core contribution of Kauppi’s study is its exposure of what was at stake in the self-descriptions of a particular power-idea. In such conceptual assemblages, units of meaning are marshaled under a master thesis that writes itself out of the normative space of reasons, assuming the compound role of irrefutable argument and socially emotive rallying-point. With Kauppi’s framework in hand, one can understand just how structuralism became so influential that ‘nobody cared about the weaknesses of the concept’ (114). Yet monopolies breed market instability, and the same associative links through which theory had colonised the field would also deliver its demise, spreading a disenchantment with its claims via a synchronous disintegration of its networks. In Kauppi’s narrative, May 1968 marked the moment when French theory began to be ‘tamed’ (132), drained of its radicalism and recuperated by the universities. His explanation for why this occurred cuts to the paradoxical core of theory itself, as an enterprise which enters into ever more central intellectual fields, while continuing to trade on its aura of oppositionality, the foremost source of its capital. As Kauppi says of the great names of theory, ‘rebellion was their modality of social and symbolic integration’ (132).

Kauppi’s book represents a truly pioneering attempt to reconstruct theory in terms of its local political life. In this sense he seems at least partly indebted to the American ‘new sociology of ideas’ (see Camic and Gross, 2001). Yet where that research program privileges institutional analysis and an attention to ‘intellectual self-concepts’, or thinkers’ understandings of their roles (Gross, 2008), Kauppi’s overriding concern is with the content of ideas, as expressed in his chosen thinkers’ texts themselves. Hence, where an excessively contextualist method would risk relegating itself to a secondary position (sociology as mere descriptive commentary), Kauppi’s unswerving emphasis on textual work enables him to isolate the social force of styles of thought by reading their contexts through their internal logic, ‘inside out, so to speak’ (2).

One useful correlative of this kind of ‘close reading’ is that it allows us to avoid ascribing dubious unities to disparate theoretical models. What must be stressed is that although Kauppi sees structuralism as a power-idea, this does not lead him to treat it as the metaphilosophical crux of the French intellectual field. Indeed, the strength and subtlety of his account lies in its eschewal of anything approaching metaphilosophy. Here an instructive comparison could be made with Gary Gutting’s recent history of postwar French thought, which makes a point of positing ‘a distinctive unity’ across the field, understood in terms of ‘a fundamental concern with thinking what is conceptually impossible’ (Gutting, 2011, 184). Gutting’s analysis, motivated by its own institutional need to demarcate ‘continental’ from ‘analytic’ philosophy, unifies French theory in terms of its treatment of what cannot be conceived. On this reading, rather than passing it over in silence, theory places the non-conceptual at the heart of its philosophical project. The claim carries weight, but it cannot compete with Kauppi’s local awareness of the social, strategic reasons why such projects seem to take shape. French thought’s focus on its ultimate impossibility was not merely a metaphilosophical theme; it was a matter of practical politics. Whatever else it may have been, it was an effective symbolic strategy for securing the rise of a style.