Marx & Philosophy Review of BooksReviews‘The Red Flag: Communism and the Making of the Modern World’ reviewed by Matthew Morgan 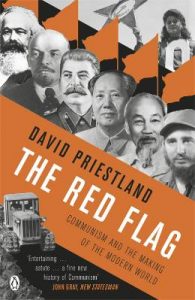 David Priestland
The Red Flag: Communism and the Making of the Modern World

Matthew Morgan is a PhD candidate in political science at York University in Toronto, Canada. He is …

In The Red Flag: Communism and the Making of the Modern World David Priestland sets out to solve a conundrum which first worried him during his initial visit to Russia in 1984 and only deepened when he spent the academic year of 1987-1988 as an exchange student at Moscow State University; a question which only became more pertinent, with the collapse of “really existing socialism” shortly thereafter: what was the true face of communism? His time in the Soviet Union left Priestland with three distinct images of communism. First a nationalist communism, that was employed in the service of the Russian state and was deemed responsible for Russia moving from a state on the geopolitical periphery to a global superpower. Second, an idealist communism which had been corrupted through the abuses of Marxist political regimes, but was still capable of serving as a positive moral force for the creation of a more just society. And finally, communism as a conservative authoritarianism, dominated by bureaucrats obsessed with maintaining power and control over an enfeebled society. (xvii-xix) Each tendency, as it existed in the waning years of the Soviet Union, is, for Priestland, a decayed representation of a different philosophical tradition of communism, which coalesced during its formative years from the French Revolution to the failed pan-European uprising of 1848. The radical communism of Francois-Noel Babeuf, that strove, through sheer force of will, towards the realization of egalitarian society became entrapped within a nationalist project of state-building and came to justify the excesses of both Stalin and Mao. The utopian, romantic communism of Charles Fourier who sought to free society from repression through the creation of model communities, was fatally undermined by its lack of a coherent plan for its realization – and this, combined with a shallow and undeveloped understanding of society, restricted it to the desire and emotional aspirations of individuals without wider social ramifications. Finally the modernist, pragmatic communism of Saint-Simon who believed the future lay in the rule of experts and a technocratic mode of governance, developed into encompassing mechanisms of control, which instead of leading the way into a rational and humane future became instruments of repression in the hands of detached bureaucrats. Each element was refined and expanded upon within the persona and the writings of Marx and thus each impression of communism, no matter how far it may have strayed from Marx’s intention, can be said to be the true face of communism. The tale of communism in the twentieth century, can for Priestland, then be told as the oscillation between each of these images by professed communist regimes. It is this argument which underlies the broad historical analysis conducted throughout the Red Flag.

Although Priestland aims to study the entirety of the representations of communism in the twentieth century, the majority of his focus is dedicated to the Soviet Union and its Eastern European satellites with China serving as a prominent secondary actor. The experience of Cuba and Latin America is restricted to a short chapter, while the history of the African Marxist states which emerged following decolonization consists largely of a series of concise summaries of their rise and fall and lacks the rigorous philosophic examination of the transformations in society and styles of governance which is afforded to the Soviet Union and China. While developments in these two states and the interactions between them form the centrepiece of Priestland’s analysis, his interest lies not in how their respective communist parties achieved power, but rather the beliefs and orientations which motivated their post-revolutionary domestic and foreign policies. What emerges alongside the traditional political survey, which chronicles all the major twists and turns in the Russian and Chinese states after their respective revolutions, is an interesting and detailed cultural history that draws attention to landmark films and novels as signifiers of shifts in the social and political mood within each state. An example of this is Priestland’s comparison of two films on the Russian revolution released a year apart and the differing receptions which they received in the Soviet Union. Vsevolod Pudovkin’s 1927 film the End of St. Petersburg – the tale of a peasant who travels to St. Petersburg, and makes a journey from ignorance to revolutionary consciousness, eventually participating in the storming of the Winter Place – is a classic film of socialist realism, with its focus on the individual and the role of communism in Russia as a modernizing force, leading the people out of ignorance. (61) Pudovkin’s film is sharply contrasted with Sergei Eisenstein’s 1917-October, released the following year, a film that is now highly regarded, but was not well received in the Soviet Union at the time of its release. In contrast to the disciplined and rational socialist consciousness that is on display in the End of St. Petersburg, 1917-October is infused with revolutionary romanticism and displays the power of the masses, rather than the transformation of an individual. (132) In a Russia that was shortly to be subjected to its first five year plan, the End of St. Petersburg effectively represented the newly emerging Soviet culture, while 1917-October was a retrospective on the Russia which existed shortly after the Bolshevik victory rather than a portrayal of present realities. These sorts of comparisons are so frequent throughout Red Flag, that it can be read as a comprehensive review of Soviet and Chinese literature and film, alongside the broad political survey of major events which consumes the majority of its pages.

The failure of communist regimes in the twentieth century to create a more just society, instead descending in horrors which cost the lives of millions, is laid at their inability to find an effective synthesis between the three variants of communism discussed above. The Soviet Union and China first both embraced an extreme radicalism, which placed the construction of the new revolutionary society upon the boundless capacity of the new socialist man, whom the revolution had supposedly brought into existence. The Stakhanovite movement which celebrated the new labour heroes in Russia and the Great Leap Forward in China were both outgrowths of this tendency. Faced with disillusionment after the new communist utopia failed to emerge, both regimes then verged towards a highly pragmatic form of communism that merely sought to manage the present reality through the extension and deepening of rational procedures of control and the drive towards ever greater efficiency, surrendering their revolutionary aspirations to competing with and besting the capitalist West at their own game. Lost in both orientations was the romantic and humane communism that was responsible for initially animating the original revolutionary upsurge in each country. While communists, especially during the Second World War and the decades long struggle in China, may have been highly effective partisans, waging a struggle against the state and building a new society after seizing state power required a different set of capabilities which the former rebels struggled to realize. The militarized guerrilla society of equals that the communists formed in opposition, grafted without a major transformation onto the state apparatus resulted in a paranoid totalitarian state. (305) The failure of communism in the twentieth century then was not due to a major lapse in philosophy or an inadequate understanding of the mechanisms of capitalism, but can instead be traced to a failure of governance, communist parties simply did not know how to properly exercise power once they had acquired it.

While a decade ago communism was regularly condemned to the dustbin of history, discredited by its own legacy of violence, the economic turbulence of the past several years has provoked a renewed popular interest in Marxism. This reformed communism must find a way of incorporating the romantic, participatory principles that inspired revolutions across the globe, but were abandoned shortly thereafter as the new regimes struggled to consolidate their power. (575) Priestland does not offer any answers to how this fate might be avoided, but his overview of the litany of failures which marred communism in the twentieth century serves a cautionary tale for radicals who seek to reconstruct it in the twenty first.