Marx & Philosophy Review of BooksReviews‘First as Tragedy, Then as Farce’, ‘The Lacanian Left: Psychoanalysis, Theory, Politics’ reviewed by Iain MacKenzie 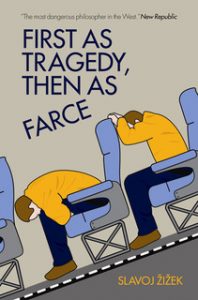 Slavoj Žižek
First as Tragedy, Then as Farce

The title of Žižek’s book refers to Marx’s rather caustic and dryly humorous addition to Hegel’s reflection that history always repeats itself: ‘the first time as tragedy, the second time as farce’ (Marx, The Eighteenth Brumaire of Louis Bonaparte). But what historical moment and attendant repetitions does Žižek

have in his sights? Immediately and forthrightly he asks the reader to stop reading if what comes to mind is that the tragedy is twentieth century totalitarianism and the farce is that some people still believe in communism: ‘indeed’, he says, ‘the book should be forcibly confiscated from you’ (1). Rather, the tragedy with which he is concerned is that complex set of forces we usually refer to as ‘9/11’ and its after effects, and the farcical can be witnessed in the various attempts to shore up the capitalist system during the financial meltdown of the last 5 years. The historical event lurking behind these two repetitions can also be found in our recent past: it is the fall of the communist regimes of Eastern Europe that, according to Fukuyama, signaled the twin triumphs of liberalism and capitalism. In this respect, Žižek’s book belatedly joins a long list of responses to Fukuyama’s The End of History and The Last Man, but it does so with all the benefits accrued by knowledge of the manifest weaknesses of liberal democracy and global capitalism in the first decade of the twenty-first century. Of course, as those familiar with Žižek’s work will expect, this is no cool reflection on the hyperbole of neo-con rhetoric. Rather, in a polemical routine that begins to grate after a while, he makes it clear that we must ‘take sides’ and those who side with the critical Left no longer have ‘to go on apologizing, while the other side had better start soon’ (8).

The book is split into two sections. The first – ‘It’s Ideology, Stupid’ – is an engaging account of the contradictory ideas underpinning the free market, while also reminding those on the Left that crises in the operations of capitalism do not always engender emancipatory opportunities. Žižek is also on firm footing when calling to account the ‘disgusting spectacle of cheap moralization’ following both 9/11 and the recent economic bust, on the grounds that it is ‘an ideological operation if ever there was one’ (37). That said, he also maintains a watchful distance from those on the Left who appeal to the forces of the multitude (Hardt and Negri) or the relatively uncharted waters of neuropolitics (Malabou but he could also have mentioned Connolly) in the hope of finding moments of liberation amidst the ruins of the first decade of the new century. These critics of capitalism, according to Žižek, typically substitute real political engagement with descriptions of a post-political Real that simply confirm their complicity with the ideological perspective of the system they seek to criticize. This part of the book, therefore, adopts an argumentative strategy that will be familiar to his more seasoned readers. Indeed, there is no doubt that Žižek has a well-turned facility for hoisting Left and Right on the post-ideological petard only to have them ram into the unbreachable castle of Lacanian ideology-theory and blow themselves up! Of course, that Lacanian inspired theories of ideology are not as unbreachable as Žižek imagines is hinted at in the occasional intra-Lacanian spats that punctuate the book (notably, fellow Lacanian, Jacques-Alain Miller’s response to the financial crisis is derided for being in league with political forces on the right). It raises a particularly interesting problem for Žižek: what political implications follow from his insistence that the first decade of the twenty-first century remains stubbornly ideological (stupid!)?

It is a question that shapes the second section of the book: ‘The Communist Hypothesis’. This is a rather more deftly woven set of reflections and arguments than the first section. In it he allies himself with his fellow post-Lacanian, Badiou. Zizek says: ‘I claim here that the communist Idea persists: it survives the failures of its realization as a specter which returns again and again, in an endless persistence best captured in … Beckett’s Worstward Ho: “Try again. Fail again. Fail better.”’ (125). One of the main problems with this approach to the persistence of the communist Idea, however, is how to keep one’s critical distance from the many different versions of liberal democracy which, at least since J.S. Mill, have also claimed that ‘failing better’ is an intrinsic part of its justificatory apparatus. Žižek’s, perhaps surprising, claim is that no amount of democratic theory can ever tackle the fundamental problem of ‘the gap that separates the Excluded from the Included’ (97). I say, ‘perhaps surprising’, because such a claim reeks of the norms of openness that liberal democratic regimes have made their own. Žižek is all too aware of this and struggles, leaning heavily on Badiou for the most part, to ontologize this claim regarding the Excluded while maintaining that it must nonetheless be treated as a problem of justice. Two instances of the dilemmas that emerge from this attempt to distance communism from liberal democracy are striking. First, Žižek is led to a de-historicised and rather empty account of justice (98-9) and second, in response to Hallward’s claim that the model of power animating Badiou’s ontologised politics ‘seems to pre-date Foucault’, Zizek presents a generalized retort to the Foucaultian understanding of power that is weak to the point of erroneous (101-2). Cutting a longer story short, this inability to grapple with the substance of justice or the nuances of power means that Žižek’s sense of revolutionary agency turns out to be rather lame: ‘we are the ones we have been waiting for’ (154). By the end of the book, therefore, Žižek’s intricate conceptual jigsaw has produced a soothing picture of the possibility of radical alternatives to liberal-capitalism but ultimately it has all the saccharine qualities of the chocolate box from which it was taken. It is not an image of radical politics that is to Stavrakakis’ taste either.

A good place to start with Stavrakakis’ The Lacanian Left is in the middle. It is there that we find the dispute with Žižek clearly (and pointedly!) laid out. At the heart of this disagreement is a dispute regarding the political efficacy of the unconditioned or ‘pure’ act. Žižek is committed to the idea that a pure political act can destabilize ideological claims about, for example, the necessity of capitalism or the naturalness of greed. Stavrakakis doubts the potency of such acts in terms of ‘their ability to effect a radical re-foundation of the social in a progressive direction’ (135). At least, he doubts their radical potential while they remain tied to a masculine libidinal economy of purity. According to Stavrakakis, a rather dirtier, impure, and feminine ‘ethic of enjoyment’ emerges as a better candidate for the radical actor looking to find room to breathe in the thick ideological air of the post-9/11 world. Interesting as this claim is, it is fundamentally the result of an intra-Lacanian dispute. Psychoanalytical refinements to one side, the political consequences of this disagreement are more important and they are sharply articulated by both Žižek and Stavrakakis. At the crux of their political quarrel is a dispute about the relative merits of radical democracy and the communist hypothesis. As Stavrakakis makes clear, he is convinced that there is nothing significant about the communist hypothesis that isn’t better expressed by the concepts animating radical democracy. As Žižek has effectively responded: which side are you on? For the non-Lacanian, however, the debate may well seem rather overblown. Can we meaningfully separate a rather insubstantial account of justice based on an ontological account of Exclusion and the necessity for pure (masculine) political interventions (Žižek) from an ethics of enjoyment based on an ontological account of the radical mobilization of (feminine) jouissance (Stavrakakis)? Isn’t there the faint sound of Cole Porter in the background: ‘you say to-mate-oh, and I say to-mat-o’?

However, Stavrakakis’ book is not solely concerned with the intricacies of an on-going debate with Žižek. It has a broader agenda out of which arises a strong and compelling thesis: that a range of big-hitters in contemporary political theory (Laclau, Badiou, Castoriadis as well as Žižek) form a Lacanian Left with much to offer political thought. Individually, they are all important thinkers in their own right but collectively, according to Stavrakakis, they signal a shift away from the Hegelian Left (Marx and Marxism) and the Freudian Left (Reich and Marcuse being the major figures) to a new radical Left engagement with the dilemmas of contemporary capitalism based on the work of Lacan. The potential of engaging with this relatively new form of Leftist thought is made clear by some lucid analyses of contemporary political issues in the second half of Stavrakakis’ text (national and European identity, consumerism and the idea of democracy in post-democratic times). While these interventions will not necessarily be well received by many on the Left, especially those with a deep antipathy to Lacan and all that his work has engendered, Stavrakakis does make a compelling case for the broadly consistent trajectory of this form of Leftist thought and there is no doubt that it is a movement worthy of deep and constructive engagement. Stavrakakis’ well-put together book will surely become the benchmark for that engagement.