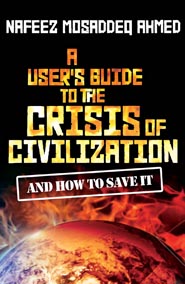 This is an impressive study of key crises confronting our civilization – defined by the author as a global, industrial, and capitalistic one – and stands as a unique attempt to demonstrate their systematic interconnections. The book spends its detailed and well-researched chapters outlining crises proper to climate catastrophe, energy scarcity, food insecurity, economic instability, international terrorism, and the tendency to militarization. Each chapter is highly focused, retaining an authoritative voice despite the diversity of topics covered. Throughout, Ahmed draws convincingly and commandingly on a number of fields, including climate sciences, geology, monetary and financial economics, and systems theory, among many others. The impressive scope of the book owes to the fact that Ahmed is very deliberately a wide-ranging, interdisciplinary scholar, having taught international relations at the University of Sussex and Brunel University. His credentials do not end there, however. Ahmed is also a respected political analyst and serves as the Executive Director of the Institute for Policy Research and Development in London.

The links Ahmed is able to forge among the crises he isolates attain an especially compelling kind of coherency. But to link problems of energy scarcity, however brilliantly, with economic instability, for instance, is not necessarily to have demonstrated the nature of the system we inhabit such that these problems may be linked in the ways Ahmed has. This is cause for concern since Ahmed very deliberately proposes to define the crises he outlines systematically, not least in order to redress a problem he sees in the available literature. He states that ‘while there have been huge quantities of books published separately on different global crises, almost none attempted to understand them collectively and systemically; and those few that tried suffered from considerable deficiencies’ (vii). According to Ahmed this is no mere epistemological problem. For Ahmed also wishes ‘to demonstrate the interconnection of global problems of ecology, energy, and extremism;’ and, borrowing from the language of complex adaptive systems, he wishes to “forecast their probable converging trajectories; diagnose their systemic causes; and finally recommend a series of key structural “reforms” that demand urgent attention’ (vii). To claim to diagnose systemic causes is to make a bolder statement about the actual nature and mechanics of the system that first allows Ahmed to circumscribe the crises he outlines.

Yet the question may well be put to Ahmed whether there is a clear and feasible notion of systematicity in these pages and more importantly, whether this notion is applied methodologically to the resolution of the identified crises. Despite clear references to a formidable tradition of civilizational complexity theory (Joseph Tainter, Thomas Homer-Dixon, etc.), this study cannot be said to have used any but the most empirically obvious and accessible of concepts drawn from the framework of complex adaptive systems or from any other of the prevalent twentieth century systems movement (such as autopoiesis or world-systems analysis). Apart from the shortcoming in methodology, Ahmed’s proposed solutions to global, systemic crises remain, in fact, largely unarticulated in systematic terms. What ends up replacing any rightfully expected systematic solutions to systematic crises are Ahmed’s proposed structural reforms. If, however, the crises of civilization are systematic, with non-obvious and deep-rooted causes, then any program of reforms should be doomed from the start. Naturally this will depend on the manner in which reforms are defined. One senses that Ahmed knows this – such is the reason for declaring that his reforms are structural. Yet what if there is a difference in kind or contradiction between structural change and reform? Ahmed does not address this question, despite his references to Chris Harman, who was always at pains to distinguish between these terms, and to a larger Marxist tradition (via Hugo Radice and Fred Halliday) of political economy that clearly does and knows quite well, as Ahmed states, that ‘at the core of any social system is its constitutive relationship to the natural world’ (210). Ahmed should perhaps have chosen to emphasize, and further, to explicate the constitutive element of this relationship when attempting to articulate structural solutions to global, systemic crises. For if, as Ahmed believes, the relationship between system and structure is constitutive, and if the system is actively generating structural crises, then no merely reformatory measures can possibly alter the system’s functioning on reproducibly sustainable terms, the very promise of his ‘post-carbon civilizational renewal’ (258).

Granted, Ahmed clearly identifies a good many of the undeniably structural problems specific to the capitalist system (though focusing in particular on the much easier target of its neoliberal moment), but he is unable to formulate in tangible, one might say material, terms the conditions under which his purportedly structural reforms are to take place on anything like a reproducible basis. Moreover, the structural reforms Ahmed does suggest do not appear to be designed to affect the problems he identifies when criticizing neoliberal capitalism at the level of structure. For, while Ahmed very clearly states just what systemic parameters do count as structural features of the global order, he is unable to provide solutions to the problems he identifies except on an abstract and voluntaristic level, as if these solutions could be magically willed into being. Unfortunately, such voluntaristic language permeates the entire ‘Prognosis’ section of the text. For example, after defining the materialist value system of neoliberal capitalism as an historically entrenched, structural feature of the current system, Ahmed wishfully asserts the following of what he believes will be its successor value system:

Based on a new, more holistic and scientific understanding of human nature and the natural world, a new ethical system based on human cooperation, grassroots participation and the mutual needs and well-being of all will be increasingly viewed (and justifiably so) as the basis of the rational pursuit of self-maximization. In this post-materialist ethics, the welfare of others will literally be equivalent to the welfare of the individual, and vice versa. The driving force of modern, post-carbon societies will not be mass consumerism, but rather the scientifically grounded recognition of the interconnectedness of human beings, all life, and the earth (257).

But what if scientific method and understanding is also very much a structural feature of the capitalist system? In any case, if the author is to make such bold claims, surely he ought to account for the sorts of conditions and structural solutions that would bring them about. What agent will affect the changes Ahmed outlines? This last point is only tentatively addressed by the author and does not feature as a significant part of the book’s prognosis chapter.

It is not in the scope of this study to explore the possibilities for civilizational renewal, and the various alternative ideas, strategies and solutions currently being proposed and developed around the world in response to global crises. What has been discussed here should by no means be interpreted as a final answer, but rather as a tentative template for the full array of issues, concepts, theories, and values that we will need to explore to make viable an ecologically harmonious, politically popular, socially just and spiritually fulfilling post-carbon civilization (258).

In sum, Ahmed’s structural reforms end up carrying the burden for the lack of a clearly applied systematic methodology in this study, one geared toward articulating the necessary alterations in structure required to overcome the continued functioning of the capitalist system. Consequently, these reforms are advocated voluntaristically rather than actively traced to the causes motivating global crises so that they might be proposed as systematic solutions. While the book strikes a tone of high hope for a project of ‘post-carbon civilizational renewal,’ this tone is not justified by any of its arguments.