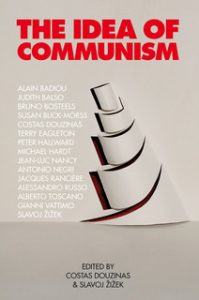 Slavoj Žižek and Costas Douzinas (eds)
The Idea of Communism

Leaving school at fifteen, Brian Morris worked in a foundry and as a seaman and tea-planter before …

In March 2009 a large conference was held at the Institute of Education in London to discuss the “Idea” of communism. It brought together a number of Marxist philosophers, mostly academic celebrities, scholars such as Jacques Rancière, Antonio Negri, Terry Eagleton, Jean-Luc Nancy and Slavoj Žižek. It was focussed a round a keynote address by Alain Badiou. An ex-Maoist, Badiou is now heralded as one of the great philosophers of the twentieth century, at least by his Marxist friends. Badiou, a latter-day Platonist, suggested that communism was the only political Idea worthy of the true philosopher, and that it had the status of an eternal idea. It was essentially a kind of hypothesis about emancipation. The question was therefore posed as to whether the term “communism”, given its association with that “historical failure” – the communism of the Soviet regime under Stalin – could be usefully applied to the “new forms” of radical politics that the Marxist academics at the conference clearly felt they were initiating. This book is thus a collection of some rather abstruse reflections on the “Idea” of communism by some fifteen academics, although who they are and where they came from is never indicated in the text.

The term communism, of course, has many different meanings and connotations – the determinate negation of capitalism, the state control of the economy, the visions of the nineteenth century utopian socialists, the state capitalism of the current Chinese Communist Party, or, as Marx wrote, “the positive expression of the abolition of private property” (139). As Michael Hardt puts it, in an essay relatively free of scholastic jargon, communism is the affirmation of common property, as opposed to that of private and state (public) property (144). Kropotkin of course was suggesting this at the end of the nineteenth century.

The book has a rather in-house feel to it, as the likes of Badiou, Žižek, Rancière, and Negri form a kind of exclusive Marxist coterie who continually refer to each others work. The reflections offered in the text are also rather exclusive, for many of the essays simply offer somewhat scholastic commentaries on such luminaries as Marx, Lenin, Stalin and Mao Zedong, reflecting on what they had to say about communism, although such political reactionaries as Hegel, Nietzsche and Heidegger often get an affirmative mention. These academic Marxists seem blissfully unaware that there have been socialists/communists outside the Marxist tradition. When reference is made to political theorists outside the usual Marxist canon what are we offered? – the radical universalism of the Islamic scholar Sayyid Qutb, the intellectual inspiration of the Muslim Brotherhood, and the plebeian socialism of Garcia Linera, the current vice-president of Bolivia. Moreover, some of the essays are written in the kind of scholastic Marxism that is barely intelligible. Thus we get such expressions as: “the ideological operation of the Idea of communism is the imaginary projection of the political real into the symbolic fiction of History” (11). The book in fact is full of platitudes wrapped up in scholastic jargon. Interestingly, some of the more informative and insightful essays – Hallward on political will, Bosteels on Lenin and left-wing communism, and Douzinas on human rights – are not in fact by the famous academic gurus.

What then constitutes the “new” Marxist politics, and its vision of a “radical emancipatory project”?

Firstly, whereas generations of radical scholars and activists have usually thought that the concepts of socialism and communism are virtually synonymous, we are now informed that socialism implies the welfare capitalism of the Keynesian variety and is quite distinct from the pure communism that Badiou writes about. That welfare capitalism is a form of socialism is a contradiction in terms, although it may incorporate socialist elements in order to counter the malign effects of capitalism.

Secondly, there is the recognition the modern state is essentially an “agent of capitalism”. This surely is hardly news. Marx and Kropotkin were emphasizing this more that a hundred years ago.

Thirdly, we are told that the new form of politics will be a “politics without a party” and will take its “distance from statism”. Being a communist, Antonio Negri tells us, means “being against the state”. Marx, Engels, Lenin and Mao all clearly argued for a political party that would represent the interests of the working class, and that real politics would involve the “conquest of state power”, the destruction of capitalism, and then, allegedly, the “withering away” of the state. The autonomous Marxists now seem to repudiate entirely this Marxist political strategy. They have thus embraced, without any acknowledgement, the kind of politics that has been advocated and practised by anarchist communists (libertarian socialists) for more than a century.

Fourthly, Jacques Rancière, the guru of the post-anarchists, suggests that communism is enacted when workers and ordinary people struggle for basic rights and run themselves the factories, schools, administrations etc. Again, self-management is something that Kropotkin and anarchists generally have been emphasizing for many generations. Being a communist, Negri suggests, means “building a world where the exploitation of capital and subjection to the state are eliminated” (161). Isn’t this what anarchists have always advocated?

Fifthly, there is constant reference throughout the text to human rights, the class struggle, universal values, and the emancipation of humanity. Does this imply that postmodernism, along with post-Marxism, has had its day?

Finally, it is worth noting that Slavoj Žižek, in contrast to the anti-Marxist Marxists like Badiou and Negri, is a latter-day Jacobin and Marxist-Leninist. His vision of the “new emancipatory politics” thus involves the establishment of a “centralized dictatorial power” to enact “strict egalitarian justice” through “disciplinary terror”. How this fits in with the two other concepts of the eternal Idea of communism, political voluntarism and trust in the people is never explained. Peter Hallward in contrast emphasizes the importance of voluntary and autonomous action and direct participation, but throughout most of the discussions in this book, in true Marxist fashion, there is very little mention of liberty, and not very much about community. The concept of free communism emphasized by Kropotkin and libertarian socialists (anarchist communists) is quite beyond its radar. Although we are informed that one of the themes of the conference is that “Freedom cannot flourish without equality and equality does not exist without freedom” (x), the Marxists are just discovering for themselves what Bakunin was affirming way back in the nineteenth century in his opposition to the statist politics of Karl Marx.