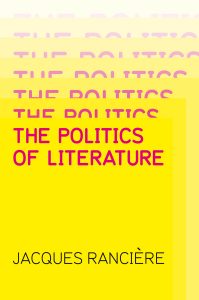 Jacques Rancière
The Politics of Literature

Jacques Rancière is best known for placing the question of equality at forefront of radical political thought. He argues, in Disagreement (1995), that politics takes place in the intersection of an egalitarian dynamic, which posits the equality of intelligences and abilities, with the ways in which inequalities and hierarchies are institutionalized within society. In contrast to the ‘ossified Leninism’ (in Alain Badiou’s words) of his former teacher Althusser, which maintains a sharp division between Marxist science and mass politics, Rancière gives an account of political action that allows for potentially anybody and everybody (‘n’importe qui’) to participate as equals in collective decision making. With such a high standard, this egalitarian politics is difficult to sustain over long periods of time, meaning that political practice is composed of transitory movements that intermittently disrupt the ways that speaking, being, and doing are organized within society. Moreover, Rancière notes that, on his account, politics is rare.

While radical political thought requires a concept of revolutionary activity, it must also account for those sustained and sometimes quotidian efforts of transformation that resist the inegalitarian organization of social life. In the past decade, Rancière has turned to the politics of aesthetics for this complement – what, following Deleuze, I would call a micropolitics – to his politics of equality, which has received an extensive theoretical treatment in his Aesthetics and Its Discontents (2004), and more recently, in the book under consideration here: The Politics of Literature (published in French in 2006). The Politics of Literature is comprised of ten essays, written between 1997 and 2006 (with the exception of an article on Brecht from 1979), that Rancière divides between ‘hypotheses,’ ‘figures,’ and ‘crossings.’ The ‘figures’ include Flaubert, Tolstoy, and Borges, while the ‘crossings’ discuss the intersections of literature and theory within psychoanalysis, the genre of biography, and Badiou’s interpretations of Mallarmé. These chapters serve to test the positions outlined in the ‘hypotheses,’ though they are sometimes uneven in scope and purpose (such as the chapter on Tolstoy, taken from an opera program, or the chapter on biography). For this reason, I will focus on the first two chapters, which sketch Rancière’s hypotheses on the politics of literature and the problem of literary misunderstanding.

The politics of literature, or its micropolitics, is not concerned with the engagements of particular authors. Instead, Rancière puts forth the hypothesis that ‘literature does politics simply by being literature’ (3). Thus literature challenges and transforms the boundaries of what Rancière calls ‘the distribution of the sensible’ (‘le partage du sensible,’ translated by Julie Rose as ‘the distribution of the perceptible’) – the distribution of ‘space and time, place and identity, speech and noise [and] the visible and the invisible’ – by introducing ‘new objects and subjects onto the common stage’ (4). The politics of literature and the politics of equality both introduce a miscount into the count or representation of speech, bodies, and spaces within a particular set of social relations. Nevertheless they do so in different ways: politics is a dynamic of the subjectification of collective practices that operate through disagreement and dissensus, while literature produces a literary misunderstanding that introduces new relationships between words and things. Hence these two forms of politics – dissensus and misunderstanding – challenge and reconfigure different aspects of social life: ‘Politics works on the whole, literature works on the units’ (41). One can then anticipate Rancière’s conclusion that literary misunderstanding does not often ‘serve’ political disagreement. That is, the politics of literature cannot be reduced to a political program, which would make of literature a technique of ideology critique, or a technique for properly representing social relations. Instead, Rancière argues that the politics of literature takes place in the interstices of three regimes of the expression of literary equality (26).

Let us look at the specifics of these three regimes of expression. First, Rancière argues that literature is a new ‘system of relationships between practices, the forms of visibility of such practices, and modes of intelligibility’ (7) that emerges in the 19th century when new subjects, words and phrases challenge the classical order of representation. The theoretical basis of this order is Aristotle, who distinguished between what was proper to great art (the imitation of the actions of great men) and what was external (the quotidian life of reproducing the life of society). In addition, the French iteration of the classical order of representation (Rancière cites Voltaire) also maintained a hierarchy of spectators: the theatrical imitation of the actions of great men should be, in this regime, destined for a noble public of ‘princes, generals, magistrates, and preachers’ (12). The new distribution of the sensible that emerges with ‘literary democracy’ dismantles the supposed harmony of poetic hierarchies and social hierarchies. With the new regime of literature, a writer and an audience can be anybody and everybody, and with the extension of the techniques of writing, the subject matter can be, rather than great deeds and great speeches, any part of social life (this echoes Benjamin’s essay ‘The Author as Producer’).

Since literary democracy dismantles poetic hierarchies, Rancière also opposes it to the concept of literary modernity, which grounds literature in the materiality of language. This materiality of language, however, points to two different modes of literature: poetic intransitivity and prosaic communication. The politics of writing, then, seems to be irreconcilably and problematically split, as in Sartre’s What is Literature? (and, I might add, as in ‘Black Orpheus’), between the ‘literary autonomy’ of poetry, and the political engagement of prose. Rancière turns the problem around and argues that literature is defined by the constant oscillation of, and play between, the intransivity and transitivity of language, rather than the assertion of fidelity to one or the other. For Rancière, Rimbaud’s work is paradigmatic of this play that erodes the division between poetry and prose, literature and life: from religious rhetoric, popular songs and ‘the worn phrases of language and the meaningless rocking of nursery rhymes’ emerges an ‘unknown quantity that is called on to make a new sense of and rhythm out of collective life’ (6).

This first regime of expression therefore introduces new subjects, audiences, and objects to literature. The other two regimes are ways of relating words and things. One of them presents an indifference to the hierarchy of words and things, an excess of detailing the ‘molecular equality of micro-events’ and the intensities and affects of things rather than their orders of significance within the narration (25). Here, Rancière transforms the anti-democratic Flaubert into a champion of democratic prose. Instead of being a neurotic aristocrat of absolute style (as he is for Sartre), Rancière traces how Flaubert’s contemporaries attacked him for being ‘democratic,’ for dissolving an ordered representation of society. Thus Flaubert becomes ‘a writer for a time where everything is on the same plane and where everything has to be described. A tide of beings and things, a tide of superfluous bodies, floods the novel’ (39). Micro-events and details become as important as the protagonists.

Finally, literature introduces a new regime of poetics that seeks to decipher the signs written on the mute things that support the actions of the characters – in short, the poetics of the stage on which the story takes place, ‘the laws of a world on the body of mundane things and in words of no importance’ (21). Rancière argues that it is through literature that symptomal reading – as utilized in Freudian and Marxist theory – becomes possible. This regime functions as a metapolitics, which looks behind the actions of political dispute (or literary fiction) for the true motor of history (or the story); it searches for the base underneath the superstructure. Rancière claims that this poetics structures the conceptual apparatus of metapolitics, as the distribution of the sensible that makes symptomal reading possible. Thus Rancière reverses the priority between Marxist or Freudian criticism (especially in their structuralist forms) and literature: when they ‘believed they were demystifying literary naiveté and formulating its unconscious discourse’ they did not realize that the ‘explanatory models they used to tell the truth about the literary text are the models forged by literature itself’ (22).

This argument places Althusser or Lacan (or, more recently, Slavoj Žižek), and their claims to mastery over the text, in a bind. But would it be as troubling for Marx? Rancière argues that the analyses of Capital, which proceed from the appearances of things to their social basis, already have a model in Balzac’s fiction. Nevertheless Rancière’s critique of romantic nostalgia for the perceived organicism of Greek tragedy and life is very close to Marx’s suggestions, found in the Grundrisse, for a materialist critique of aesthetics. According to Rancière’s reading of Balzac’s non-nostalgic portrayal of the modern world:

The chaos of life harbours a power of language and rationality that far surpasses the old logic of action. What careful pacing of episodes in a drama, what tragic hero’s internal strife will ever equal the power of language present in the shambles of the Galeries de Bois, but also, already and every bit as much, in cousin Pons’ hat and spencer? (19)

Compare this passage to Marx:

is Achilles possible with powder and lead? Or the Iliad with the printing press, not to mention the printing machine? Do not the song and the saga and the muse necessarily come to an end with the printer’s bar, hence do not the necessary conditions of epic poetry vanish? (Marx 1973, 110-11)

For Marx, Greek art exercises an ‘eternal charm’ because we find joy in the ‘naiveté’ of the ‘historic childhood of humanity, its most beautiful unfolding, as a stage never to return,’ but he does not ask why, at a particular historical moment a new mythology emerges as a possibility for conceptualizing a new social praxis (ibid., 111). For Rancière, it emerges out of the same crisis of the classical regime of expression that makes literary democracy possible. This points to a deeper and unresolved difference between the politics of equality and the micropolitics of literature. For Rancière, the politics of equality is an invariable feature of politics as such, whether he discusses plebian revolts in ancient Rome or nineteenth century revolutionary activity in France. Yet the micropolitics of literature is a distinctly modern practice – so when Rancière qualifies both as moments of equality or democracy, it gives the impression that we have arrived, that democracy is here at this historical moment, when clearly this is not the case: equality and democracy, in Rancière’s terms, are neither states nor milieus, but fleeting though powerful dynamics. We might, however, split the operations of the egalitarian politics and literary democracy. This disjunction would allow us to acknowledge the real transformations of literature – its authors, its objects, and its audiences – over the last two hundred years, while recognizing the difficult and seemingly transitory character of the insurrectionary politics of egalitarianism.