Marx & Philosophy Review of BooksReviews‘Capitalism, for and Against: A Feminist Debate’ reviewed by Kate Drabinski 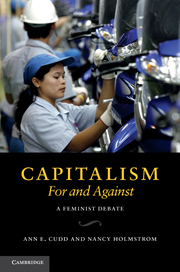 Ann Cudd and Nancy Holmstrom (eds)
Capitalism, for and Against: A Feminist Debate

Kate Drabinski is a Lecturer in Gender and Sexuality Studies at the University of Maryland, …

In their Capitalism, For and Against: A Feminist Debate, Ann Cudd and Nancy Holmstrom stage a fully developed debate about the state of capitalism today, and whether or not it is good for women. The book begins with Cudd’s defense of capitalism as an economic system that is both practically and ideally good for women, increasing life expectancy, lowering infant mortality and birth rates, and increasing the quality of life for everyone by maximizing efficiencies in production, innovation, and, most importantly, freedom. Holmstrom takes the opposing view, arguing that capitalism necessarily creates externalities that the system never fully reckons with, increases alienation of the worker from the product of her labor, and produces massive gaps between the rich and poor that are logical results of capitalism itself, not unexpected byproducts that can be handled with the right kind of state intervention. These two long pieces are followed by significantly shorter rebuttals where each author defends her position against a few of the most pressing critiques of the other. The result is a book that offers a substantive and robust debate of issues that we too often imagine to be settled.

Cudd makes her claim through an analysis of capitalism as an ideal type and contemporary reality, responding in advance to some of the standard critiques of capitalism as a system based on alienation of workers from the products of their labor and as fundamentally exploitative. She addresses the tendency of the system to create and entrench pockets of poverty, produce externalities, and fail to reckon with human needs as care that can never be made profitable. Cudd’s capitalism is kinder and gentler, the state tasked with ameliorating these harmful side effects; Sweden is invoked several times as an example of capitalism done right. Cudd also argues that many of the feminist critiques of capitalism misidentify the culprit: patriarchy is the real problem for women. In fact, feminism’s ideals of equality and freedom for all people to develop fully as human beings are best met in a capitalist system that rewards people for what they do rather than who they are. Capitalism has enabled women to leave the private sphere and challenge traditional social roles in a long march to freedom. Patriarchy, she argues, is incompatible with capitalism, and regardless, historically speaking, capitalist societies are better for women than traditional ones. Cudd’s enlightened capitalism is not only good for women; it is the only system that has shown itself historically to enable concrete gains for women, and for all people.

Holmstrom opens her argument with a discussion of the current economic crisis, and this beginning marks a clear difference between her orientation and Cudd’s. Holmstrom grants much of Cudd’s ground that capitalist development has enabled significant strides for women, but in her view, those gains are in the past. Today capitalist logic has led to social ills that it can no longer contain. The very efficiencies that Cudd finds laudatory are for Holmstrom the precursors to the production of incredible waste as capitalism demands ever-increasing production of goods that people do not actually need. Our natural resources are reaching their breaking point, and our garbage dumps are quite literally filled with capitalism’s detritus. Holmstrom grants that patriarchy is not identical with capitalism, but she argues that capitalism actually benefits from and extends the inequalities patriarchy introduces. After all, it is patriarchy that helps justify low wages and the demand for free reproductive labor from women. Ending patriarchy will not be enough to end these inequalities given how these inequalities are essential to capitalism’s imperative to increase profits at all costs. Holmstrom globalizes her argument as well in a critique of what she calls the “gangster capitalism” of continued primitive accumulation that now goes under the guise of Third World debt bondage and sweatshop labor, both of which have particularly deleterious effects on women. Cudd’s “enlightened capitalism” is, according to Holstrom, a fantasy, especially as the demand for cheaper and cheaper labor makes it increasingly unlikely that states will follow Sweden’s lead. Capitalism’s promise of freedom and choice no longer holds currency where choices are increasingly constrained and freedom is reduced to the freedom to sell one’s own skin.

The rebuttals are brief but incredibly valuable. Both Cudd and Holmstrom make convincing cases for their sides, and the rebuttals help clarify their positions. Cudd argues that Holmstrom misuses statistics in her efforts to show the deleterious effects of capitalism in developing countries, arguing that some job is better than no job and that her statistics demonstrate that multinational corporations actually have a positive effect on wages. Certainly there are ugly parts of global capitalism, but overall, capitalism shows a net gain in freedom, equality, and quality of life. Holmstrom responds that Cudd is focusing on capitalism in an ideal form, not capitalism as it is lived now. For her, any good that capitalism has done for people is imperiling us as the earth can no longer meet the demands of humans, and food and water supplies are consistently threatened by a system that in reality does not care for people as living, interdependent beings.

The book is at its best in the rebuttals where the debate becomes much more lively. The bulk of the book, however, is in the lengthy position papers, leaving the debating to the end, and at that point, readers not familiar with the methods and modes of philosophical discourse may be lost. The focus on the relationship between capitalism and feminism makes for a sustained interrogation, but readers used to a more intersectional approach in gender studies may find the single-minded approach limiting. Holmstrom makes several passing references to the importance of thinking intersectionally about gender, noting that like sexism, racism is also a system of hierarchical difference that aids capitalism. She insists that patriarchy and racism are different, and she refuses to blithely analogize one to the other as she returns to a focus on gender as a specific analytical category. This way out is both a strength and weakness of the book, offering a debate within clearly defined lines, but lines that repeat old blindspots in feminist debates.

The staged debate between Cudd and Holmstrom will be of particular interest to philosophically minded readers already generally familiar with the terrain. Most readers will begin their reading already having taken a side, but Cudd and Holmstrom both make such convincing arguments, that generous and open readers will find in the debates a chance to revisit their own settled opinions. Their book is a gift in a political and academic climate where critical thinking too often takes a back seat to ideological stances.