Marx & Philosophy Review of BooksReviews‘Walter Benjamin: An Introduction to His Work and Thought’ reviewed by Mirko Hall 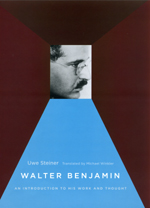 Uwe Steiner
Walter Benjamin: An Introduction to His Work and Thought

Could it be true that today’s scholarship is suffering with intellectual fatigue from Walter Benjamin? Judging by the ever increasing publication of books, essays, and reviews on this self-described independent researcher and writer, the answer is resoundingly in the negative.

Among these works, Uwe Steiner’s splendidly crafted introduction continues to validate Benjamin as an exemplary philosopher of modernity. It makes an important contribution to understanding the epistemological foundations of Benjamin’s characteristically unorthodox work and thought. The book traces the ‘intellectual momentum’ (ix) that guides his celebrated articulation of the nexus between aesthetics, subjectivity, and technology in modernity. Its primary aim is to let Benjamin ‘speak for himself’ (ibid.) and to situate – through careful chronological and thematic categorization – his key writings in the above fields. The text pays special attention to how his interdisciplinary project draws upon the German philosophical tradition, contemporaneous intellectual debates, and scholarly conversations with friends and colleagues.

Steiner is a highly respected scholar of Benjamin, who is affiliated with the new annotated edition of his writings from the Suhrkamp publishing house. In bringing his immense knowledge to this book, Steiner relies on a philologically rigorous interpretive strategy that combines very close reading with wide-ranging cultural, historical, and political contextualization. His critical introduction provides a comprehensive overview – in five illuminating chapters – of Benjamin’s scholarly output from 1914–1940, covering everything from his academic monographs to his literary-aesthetic essays and journalistic pieces. There is also a concluding discussion of Benjamin’s posthumous influences and stages of reception, alongside a bilingual bibliography of significant secondary scholarship since the 1960s. Both of these sections are carefully contextualized and documented.

There are many challenges facing anyone, who wants to research – let alone summarize – Benjamin. Steiner is fully aware that Benjamin’s intellectual trajectory can be difficult to understand. His work is situated in a tense force field that is governed by increasingly difficult historical conditions (war, economic collapse, fascism); a multiplicity of cultural-historical themes, methods, and approaches; and a diverse network of friends (Adorno, Brecht, and Scholem) with differing scholarly temperaments. In addition, Benjamin’s elliptical prose often makes the ‘highest demands on the reader’s comprehension’ (67).

Steiner judiciously responds to these concerns by teasing out the essential thematic coherence underlying his work. Despite certain epistemological tensions, Benjamin’s research into the effects of modern technology on human experience is the ‘quintessence of continuity’ (127) in his thought. This project is supported by a series of complementary investigations into how the nineteenth-century is the prehistory for ‘all critical insights into the present era’ (2); how the development of technology (photography, radio, and film) participates in the revolutionary transformation of human perception; and how this transformation effectuates a reciprocal effectivity between aesthetics and mass politics.

The book concentrates on a number of Benjamin’s writings that highlight the era around 1900 as a culturally and politically transformative period for modern history. This era is characterized by the ever-expanding metropolis and the radical acceleration of technological progress. Benjamin believes that the experience of commodity culture in the nineteenth-century – especially, in the Paris of Baudelaire and the Berlin of his childhood – is a ‘privileged image space’ (141) for understanding the foundations of capitalist modernity. Here, technological innovations cause the ‘maximum alienation of human beings’ (Benjamin on 136). Technology not only floods humanity with sensory over-stimulation, but also disrupts the flow of lived, integrated experience or Erfahrung.

To neutralize these tendencies, Benjamin undertook an intense study of every imaginable humanistic field of inquiry to ‘obtain space for an epistemologically secured metaphysical conception of experience’ (38) that could survive capitalism. He sought to develop a conceptual framework, which would make intellectually perceptible – through the tools of historical-philosophical critique – the cultural phenomena of the past that are obliterated by commodity fetishism. These phenomena could, then, be rendered legible for a new cultural-revolutionary knowledge of the present. This goal was the task of Benjamin’s own idiosyncratic version of historical materialism: an anthropological philosophy of history.

Benjamin establishes his materialist reading of modern society through the criticism of representative artworks. Following the Romantic notion of textual culture as a medium of reflection, this act of criticism discovers within artworks ‘how things yet to come are already “working” an effect on the present’ (58). The decisive power of historical materialism is its ability to reveal the political potentiality that is hidden within past cultural phenomena – a potentiality that continues to be relevant today. In Benjamin’s own words, humans are, thereby, ‘more keenly aware of their own history and capable of learning things from it’ (115).

Historical materialism also has a special interest in technology as ‘historical-philological knowledge’ (71). Despite its contribution to human alienation, technology can still be a cultural-revolutionary ‘model both for historical cognition and for political praxis’ (149). Benjamin believes that technology is a creative aesthetic-technical technique that can functionally transform older types of textual media into new semantic constellations (e.g., film as a potentiation of the novel). In this capacity, it destroys the fetishistic conception of culture and brushes it against the grain. Of course, Benjamin’s overt optimism in the political efficacy of film was famously criticized by his friend, Adorno.

Technology can also liberate humanity en masse by providing the necessary conditions for happiness (e.g., the eradication of material need). It is an instrument of reconciliation between humanity and nature: it is ‘not a fetish of doom but a key to happiness’ (Benjamin on 79). Because Benjamin’s political philosophy revolves around the ‘earthly pursuit of happiness’ (74), technology is, therefore, inherently political. For technology to remain a consequential part of modern life, its social function and transformative possibilities must be revolutionized to actively participate in the pursuit of freedom. This pursuit is not a ‘messianic restoration of all things’ (170), but the continual remembrance and redemption – here and now – of the past. It directly motivates humanity to understand and overcome its limitations and failures.

For readers interested in Benjamin’s relationship to Marx, Steiner makes it clear that – although he was deeply committed to the search for a better society – Benjamin was never swept away by the euphoric expectations of a ‘Communist political praxis’ (18). He, nevertheless, shared many political affinities with Marx: an acute sense of social injustice, a ruthless critique of existing social conditions, and support for direct participatory democracy. But whereas Marx sees history as a teleological process of dynamic social forces and their struggles, ultimately leading to communism, Benjamin sees only disaster. History is a runaway train that is racing toward the precipice unless revolutionary action applies the emergency brake. The march toward freedom is not something scientifically pre-ordained; it requires the active intervention of an immediate and permanent revolution.

There are many critical introductions – e.g., from Cambridge, Polity, Routledge, and Totem – available on Benjamin. What makes this book particularly valuable is the discussion of people, texts, and contexts that are sometimes relegated to the periphery of Benjamin Studies. Steiner does not fetishize later canonical writings (such as the artwork essay, the notes on the Parisian Arcades or the theses on the philosophy of history). He also explores lesser texts that involve Benjamin’s earliest investigations into the essence of language and the practice of literary translation and criticism. These fields are extremely important, because they allowed him to recognize the continued afterlife of cultural artifacts. Steiner also emphasizes the importance of occasionally marginalized thinkers, who are invaluable for understanding Benjamin’s intellectual outlook: Germanist Norbert von Hellingrath, essayist Carl Gustav Jochmann, art historian Alois Riegl or author Paul Scheerbart. There is a strong interest in Scheerbart, who provided Benjamin with significant political impetuses for his techno-utopian visions.

This book was originally published in German for the Sammlung Metzler, a prestigious book series that provides authoritative handbooks for scholarly life in the German-speaking world. This origin is also the main drawback of the text. As translator Michael Winkler himself acknowledges, this fact might make the book more difficult for Anglo-American audiences to understand. The text presupposes certain ‘historical and cultural contexts’ (xii) – such as the intellectual debates during Benjamin’s lifetime – that may be unfamiliar to a non-German audience. For this reason, the book might be more suitable for an experienced reader or researcher.

Despite this minor reservation, Steiner’s critical introduction is a fine scholarly work: meticulously researched and cogently argued. It is also nicely translated by Winkler. By offering additional readings, the book provides even experienced thinkers of Benjamin with ever newer ‘material and starting point[s] for learned endeavors that seem at times no less esoteric than Benjamin’s’ (6). Benjamin’s continued relevance and remarkable endurance rests on his magical ability to pose questions that unpack the hidden cultural-political relevance of a given historical era. In short, he asks those questions about human experience – in our age of great technological advancement – that continue to offer ‘newly relevant orientations’ (183) in the fight that ‘liberates all of creation in a brotherly way’ (77).