Marx & Philosophy Review of BooksReviews‘The Politics of Combined and Uneven Development: The Theory of Permanent Revolution’ reviewed by Alex Marshall 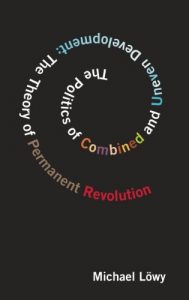 Michael Löwy
The Politics of Combined and Uneven Development: The Theory of Permanent Revolution

Of the many issues raised within orthodox Marxism since Marx’s own death, few have had the longevity, or produced as many arguments and internal divisions, as Trotsky’s theory of permanent revolution. Michael Löwy’s short book, an abridged version of an original text from 1981, gives an admirably concise, if partisan, overview of the emergence of the theory, and a new interview with Löwy at the very end of the book brings the text up to date by pursuing parallels between Trotsky’s theory of uneven development and current political movements in Latin America and the anti-globalism movement. For newcomers and experienced scholars alike, the book serves as an effective short introduction to both the emergence of the theory, and it’s longer-term consequences in the twentieth century.

Contrary to the picture often drawn of him as someone prone to philosophical determinism, Marx was in reality always anxious to emphasise the multi-linearity of historical development, and indeed even the possibility for civilization to relapse entirely into barbarism, as studies by both Kevin B. Anderson and Eric Hobsbawm have again recently re-emphasised. Marx’s theses on the Asiatic mode of production were famously censored from Stalin-era textbooks however, shaving away a layer of this multi-linear vision, and immediately after his death Marx’s own cause was also not always best served in this regard by his great friend, interlocutor, and the subsequent manager of his literary legacy, Friedrich Engels, whose own later writings were saturated with a typical nineteenth century fascination with genetics, the forward path of progress, and the revelations of Darwinism. Putting to one side his misunderstood reputation as a teleological determinist however, the evidence for Marx’s own development of the theory of permanent revolution has always been thin, and largely restricted to the occasional phrase or suggestive sentence, beginning with `On the Jewish Question’ in 1844 ,and scattered thereafter through a variety of his texts in 1848-56 before finally, and indirectly, re-surfacing in his famous correspondence with Russian revolutionaries over the possibility of revolution in Russia in 1877-82. Nowhere does the concept occupy a central place in his writings, nor is it anywhere ever fully expounded beyond noting how uneven development produced contradictions within revolutionary scenarios, a paradigm modelled on the French Revolution in particular, where the initial events of 1789 led, via spiralling radicalization, to 1793.

With this taken on board, Trotsky’s development of the theory of permanent revolution in 1905 resembled something close to a genuine innovation in Marxist theory, albeit one also influenced by his close contemporaries Rosa Luxemburg, Parvus, Labriola and Franz Mehring.

Trotsky posited a specific theory of revolution that argued against the stagist thinking of the Second International era, agitating instead for the possibility of a democratic revolution unfolding and evolving uninterruptedly into a socialist revolution via a progressive alliance of workers and peasants. The immediate effect of this intellectual innovation was similar to Lenin’s rediscovery of Hegel during the First World War, bringing both men together by 1917 in their joint belief (albeit one acquired via very different routes) that a socialist revolution in Russia was in fact within reach. Here, however, the fruits of the intellectual innovation largely ran their course, and Lenin over the medium to longer term proved himself the more pragmatic thinker, rolling back both on war communism internally, and upon placing all hopes on a global revolution externally by 1921. Löwy goes astray here by assuming that, via his wartime detour into Hegel, Lenin in fact bought fully into Trotsky’s theory of permanent revolution (60-3). In fact, the main issue that continued to divide the two men, as Lenin pointed out in 1920 during debates on the role of the Trade Unions, was that neither Trotsky nor Bukharin fully understood Marxist dialectics (Lenin, 1921). Here Löwy’s work would benefit from a closer interrogation of the relationship between theory and praxis. For all his intellectual brilliance, Trotsky’s theory proved narrow, increasingly politically unattractive, and even dangerously impractical during the course of the revolution itself, and a mere stick for berating the ‘stagnation’ and ‘bureaucratization’ of the Stalinist regime during Trotsky’s own fall from grace and eventual exile afterwards.

In his conclusions, Löwy blames the ‘stagist’ theories of Stalinism for most of the catastrophes that befell attempted Marxist revolutions in the twentieth century, from the early disastrous reverses in China, through to the Spanish Civil War, the era of Latin American ‘Popular Front-ism’, and the destruction of the Indonesian Communist Party in 1965 (the CIA on that occasion collaborating in the murder and disappearance of at least 500,000 persons). For Löwy, by contrast, the theory of ‘permanent revolution’ provides the best explanation for where revolutions were successfully carried out in countries which the ‘stagist’ model would have assumed were still too backward: Russia, Cuba, China, Vietnam and Yugoslavia. The sweeping conclusions of the book will satisfy only convinced Trotskyites with their reasoning, but nonetheless offer an interesting insight into a byway of Marxism which a number of thinkers within the socialist movement endeavour to periodically revive even today.