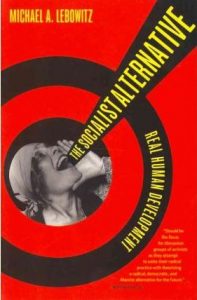 Michael Lebowitz’s important book portrays a vision of the socialist alternative to capitalism through a synthesis of some of Marx’s most important philosophical arguments concerning human development, revolutionary practice and radical democracy. Developed from his experiences in Hugo Chavez’s Venezuela as a ministerial advisor, what is particularly impressive is that this relatively short yet deceptively comprehensive work develops not only the philosophical foundations of that alternative but also outlines strategic, concrete measures that can contribute to making that vision a reality.

The first half of The Socialist Alternative would, by itself, provide a valuable contribution to Marxist philosophy through its development of the arguments contained within Marx’s Grundrisse. Lebowitz’s powerful s vision of the socialist alternative is, like Marx’s, of a ‘good society’ that ‘fosters the full development of human potential whilst keeping human beings at its centre.’ (31) This alternative society is posited as an inversion of capitalism’s tendency to impoverish and obstruct human development – for whilst capitalism creates the material conditions for this human development ‘it simultaneously denies to the majority the possibility of becoming anything other than poor human beings.’ (53) This key notion of human development is the focus of the first half of the book in which Lebowitz outlines and develops the foundations of what he calls the ‘socialist triangle’ (25) – those three mutually interdependent elements that are intrinsic to the development of the good society.

The first side of the triangle signifies the first necessary step towards that socialist alternative – ‘the social ownership of the results of social labour.’ (40) Lebowitz argues that as long as capitalism controls the means of production, our ‘social inheritance’, the continuation and perpetuation of ‘exploitation, deformation and the destruction of the environment is guaranteed’. (40) Lebowitz is careful to qualify that social ownership and state ownership are very different. What the former signifies (and what the latter does not) is the profoundly democratic notion that ‘all those affected by decisions about the use of means of production are involved in deciding upon that use.’ (41) This, for Lebowitz, stands in stark opposition to the twentieth-century experiences of state socialism in which state bureaucrats and functionaries determined the goals of production.

The author then addresses the question of how such social production must be organized and why – for the socialist triangle requires more than the changing of circumstances, it requires the changing of human beings themselves. For Lebowitz, ‘social production organized by workers’ must be ‘democratic, participatory and protagonistic.’ (87) The second element of the triangle is specifically formulated to address the question of how Marx’s concept of rich human beings can be actualized within society and it is here that the key link between human development and practice is outlined. Lebowitz emphasizes that it is not sufficient for a minority simply to democratise society and equalise opportunities on behalf of the majority as this leaves the majority of human beings themselves essentially unchanged. Human development, as it is convincingly argued throughout, can be real development only when it is self-development. It is in their responses to neo-liberalism, Lebowitz states, that reformist strategies have typically failed to understand this process of self-transformation through revolutionary practice – ‘the relationship between our activity and the development of our capacities.’(49) For Lebowitz, as with Marx, human beings are not transformed, not made richer, through the handing down from above of such gifts as equality and democracy (though these are not in any way unimportant). On the contrary, it is only through their own actions and struggles that humans can simultaneously change circumstances and themselves, fulfilling both their potentialities and those of the good society. Therefore the first two elements of the socialist triangle are interrelated – circumstances must indeed be changed but in such a way that, through the act of changing, the participants themselves are also changed; as Lebowitz puts it: ‘every act of production, every human activity … has as its result a joint product – both the change in the object of labour and the change in the labourer herself.’ (52)

The third, closely related element of the socialist triangle provides the final condition for the development of the socialist alternative. Lebowitz argues that social production and the social, democratic organization of that production are not in themselves sufficient for real human development. What is also needed is a qualitative break with the ‘quid pro quo’ way that human beings relate to one another under capitalism which tends to be as ‘self-interested individual to self-interested individual, not as human being to human being.’ (66, 67) Within capitalist society, production itself tends to be self-oriented in character and it exists as a means to individual ends. Yet as Lebowitz asks: ‘Should we be surprised at this? Individual and antagonistic interests, competition, profit seeking, maximising material self-interest – how can this be part of a new socialist society?’ (77)

Yet if the socialist triangle provides a powerful basis from which to envisage an alternative to capitalism, it is the second half of the book which gives that vision a more developed and distinctive form. One of the most compelling parts of the book is Lebowitz’s analysis of how capitalism came into being and how this process of ‘becoming’ helps us to understand the socialist alternative. The process of becoming has two sides, the ‘arising’ and the ‘passing away’, with each side representing two simultaneously existing, yet conflicting, modes of production. Socialism, like capitalism, is a fluid, organic process that begins not with its own premises but with ‘historical premises, inherited elements’. (107) It is precisely because of this that Lebowitz argues socialism must move beyond these inherited premises and create its own premises through the subordination of all elements of society to itself. (108) What this means for Lebowitz is that the Leninist distinction between (still capitalistically-oriented) socialism and communism must be rejected because ‘using individual self-interest as a lever’ is a ‘pipe dream.’ (109) Capitalism prevailed because of its pervasiveness and its completeness – socialism, too, must pervade all elements of society in order to succeed and this can be done only through the complete rejection of capitalist self-interest and other aspects of self-orientation which ‘infects all sides of the triangle’. (77)

Lebowitz argues that although capitalism obviously prevailed against the old mode of production, through what Marx called the ‘bloody discipline’ and ‘police methods’ of the state, it did so in ways that were neither logical or pre-determined, as evidenced in the contrasting conditions of production between the old and the new worlds. (97) This contrast between the development of capitalism in the old and new world is emphasized to stress the point that the development of socialism, too, for each country will also be different. The danger, argues Lebowitz, is proposing a universal transitional programme ‘independent of concrete circumstances’ (128). A revolution is not a single act but it is a ‘process of contested reproduction in which the muck of ages is constantly being reproduced’. (129) Nevertheless, Lebowitz is quick to recognize that there are conditions that are common to all paths to socialism and each concrete measure that is taken must consequently ask two questions: How does this change circumstances? And, how does it help produce revolutionary subjects and increase their capacities? (129)

Lebowitz gives a more concrete form to this process of the becoming of socialism through a series of demands designed to inform what he calls a Charter for Human Development – demands to a government that is still controlled by capital against the ‘invading socialist society’. (164) These demands include taxing the surplus value of capital through a transparent process that capitalism cannot evade,(133) ‘giving workers councils the power to act against corruption’ (134) and ‘Increasing minimum wages to ensure that everyone can meet minimum conditions for sharing in civilization.’ (164) However, if revolutionaries may initially wince at such seemingly reformist strategies, there are at least two reasons why perhaps they should not. Firstly, Lebowitz is acutely aware of the necessity of a revolutionary transformation of society and the threat to socialism which the capitalist state poses – he is as critical of social democracy as he is of Soviet communism. (132) Secondly, such demands are not simply reformist, rather, in keeping with Lebowitz’s conception of the becoming of socialism as an organic process, he frames these demands as ‘despotic inroads on the rights of capitalist property’ which subordinate capitalism to ‘an alien logic, the logic of human development.’ (136) Lebowitz’s conception of socialism is therefore, importantly, still very much a revolutionary process.

What is most impressive about Lebowitz’s book is undoubtedly its scope. It manages to be both philosophically engaging and convincing in its development of Marx’s vision of socialism through human development and practice whilst simultaneously offering strategies and a framework for contributing to this vision. Some will no doubt question Lebowitz’s close association of Marxism, human development and radical workers democracy with Venezuela and its Bolivarian Constitution, (14) yet few should question his insistence that capitalism ‘destroys human beings and nature’ and that we ‘need a vision of an alternative’. (191) Lebowitz cogently argues throughout this book that revolutionary change is necessary to bring the socialist alternative into being; yet we need not understand that change as coming about either deterministically or narrowly. What Lebowitz manages to maintain throughout is a vision of socialism that, in the spirit of Marx, retains its revolutionary core through refusing to collapse into either pure reformism or abstract utopianism. Socialism understood in this way is a process that becomes revolutionary through not only the changing of circumstances but, equally importantly, the changing of human beings.