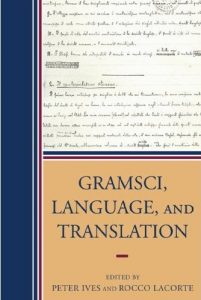 Antonio Gramsci (1891-1937) was a prominent Italian Marxist philosopher and politician, co-founder of the Italian Communist Party, an influential thinker and critic of contemporary society and culture. His studies on social theory and culture (many collected in several volumes of Letters from Prison, and Prison Notebooks) include very important texts and comments on language, translation and translatability. However, this aspect of the Italian philosopher’s work is relatively less known, and many ideas remain yet to be discovered and reinterpreted. The reviewed volume brings together 16 essays, the majority of which are translated from their earlier Italian versions. The volume is composed of a short introduction, three interconnected thematic parts, an index, and notes on the contributors.

The editors of the volume, Peter Ives and Rocco Lacorte, observe in the Introduction that ‘There is a fascinating silence concerning Antonio Gramsci’s writings on language and translation despite his wide ranging and profound influence, particularly in the fields and debates in which language features prominently such as poststructuralism and cultural studies’ (1). The essays collected in the volume concentrate on Gramsci’s writings on language and translation, seen as crucial to his social, political and cultural theory; and they attempt to shed light on the relation between his ‘linguistics and his Marxism’ (3), and to integrate his ‘political theory and his linguistic concerns’ (3).

Part I, ‘Gramsci’s Linguistics and Gramsci’s Marxism’, contains six essays. Franco Lo Piparo, in a text originally published in 1987, looks at the linguistic roots of Gramsci’s non-Marxism. The author’s main thesis is that Gramsci ‘had fully developed his theory of intellectuals, civil society, etc., while he was professionally interested in language’ (21). Lo Piparo’s insights are further elaborated upon, from a somewhat different angle, by Luigi Rosiello, who investigates linguistics and Marxism in the thought of the Italian philosopher. Rosiello also discusses the sociolinguistic aspect of Gramsci’s work, his conception of dialect, and the linguistic policies pursued by the dominant class. Next, Tullio De Mauro discusses Gramsci’s linguistic studies and achievements in a historical perspective, he also offers an interesting comparison with de Saussure’s approach to language and linguistics, commenting that ‘the two directions diverge, even though both equally and clearly delineate the same objective picture of the linguistic universe’ (60).

Stefano Gensini follows with an analysis of the political dimension of Gramsci’s contribution to the linguistic question. He observes that ‘the linguistic dimension … permeates the Notebooks as a political question, namely, as one of the levels on which the possibility of transforming Italy into a socialist country is at stake’ (75). Utz Maas, in a text originally published in German in 1988, aims at proving that Gramsci’s ‘linguistic-theoretic considerations can offer a point of departure for recommencing the discussion about a materialist theory of language’ (81). Maas’s essay is one of the many places in the reviewed book stressing the topicality of Gramsci’s thought for current philosophy of language. The first part of the book concludes with a short interview with Edoardo Sanguineti, an Italian writer, poet, artist, translator, one time political activist, and founder of the avant-garde movement Gruppo 63. Sanguineti, referring to Gramsci’s ideas, defines language as ‘an instrument for interexchange, communication and, at the same time, for creating identities’ (102), he also offers an interesting comment on comparing the complex construction of Gramsci’s Prison Notebooks with Giacomo Leopardi’s Zibaldone.

Part II, ‘Language, Translation, Politics and Culture’, comprises five essays. Derek Boothman (who translated an anthology of Gramsci’s writings into English) focuses on the issues of translation and translatability in connection with the renewal of the Marxist paradigm, he also closely examines the use of the relevant terms in the Prison Notebooks. Translatability can be seen as ‘the theoretical possibility and the practice of translating not only between different natural languages but also between different paradigms, or discourses’ (108). Boothman also compares Gramsci’s ideas with the theory more recently put forward by Nida and Taber, and sees in the Italian theorist a forerunner of the cultural turn in translation studies.

Lucia Borghese follows with a comprehensive discussion of Gramsci as translator from German, and as translation theorist. Through detailed textual analyses she demonstrates that Gramsci’s translations are consistent with the theoretical framework he developed, she also points to the need for more accurate editorial work on his manuscripts. Fabio Frosini concentrates on the issue of translatability, strongly linked to Marxism, philosophy and politics. As the author says, according to Gramsci the radical form of translation, ‘that is, the one that makes possible all other translations, is the translation of philosophy into politics’ (171). This, admittedly utopian view of radical translation (even though it reflects the final `Thesis on Feuerbach’), might be compared with ideas put forward, from a very different standpoint, in more recent times by W. V. O. Quine.

Maurizio Lichtner discusses translations and metaphors in Gramsci (and in Marx), also in connection with the translatability and historicity of languages (with the very term ‘translation’ being highly metaphorical itself). Lichtner shows the complexity of Gramsci’s views, his conscious effort to reread and reinterpret Marx, and stresses the important differentiation between solutions in theoretical terms and solutions in historical terms. In the last chapter in this section, Rocco Lacorte looks at translatability again, this time in connection not only with language, but also freedom. In this short essay, part of a larger project, Lacorte stresses that for Gramsci translatability ‘is conceived as necessary to activate what the previous knowledge and way of conceiving have neutralized – in other words, the idea that knowledge can have a revolutionary function’ (214).

Part III, ‘Politics, Theory and Method’, consists of five essays. Francisco Buey discusses the ties which exist between language and politics, language as a means of communication, the feasibility of constructing a common language, and the development of Gramsci’s own political thought. Anne Showstack Sassoon deals with Gramsci’s subversion of the language of politics. She also comments on some of the difficulties encountered in reading and interpreting his texts, claiming that: ‘consciously or unconsciously, he made a choice to write in note form and not a book. Consequently, he produced an archetypal open text that the reader must recreate each time she or he reads it’ (244). The next chapter is another essay by Tullio De Mauro, this time centered around the politics of Gramscian scholarship, and Gramsci’s contribution to current research in language studies, he also stresses the systematic nature of the Notebooks.

André Tosel looks at the lexicon of Gramsci’s ‘philosophy of praxis’, and shows the shift in interpretation throughout the Italian philosophers work, from a linguistic equivalent of ‘historical materialism’, to ‘an identity card of a program capable of elaborating Marxism in response to the challenges of the times’ (267). Tosel offers a careful philological and political reading of the Notebooks in which he discusses ‘philosophy of praxis’ as a nomenclature and as a theoretical question, and also as a methodology of history. The last essay of the collection, by Marcus E. Green and Peter Ives, is devoted to the concept of subalternity and Gramsci’s attention to language politics and his concern with the function of popular common language. They also devote considerable attention to the notion of ‘common sense’, understood by Gramsci ‘as popular social thought or as the common beliefs and opinions held by ordinary people’ (293). The quotation from the Notebooks, that ‘language also means culture and philosophy (if only at the level of common sense)’ (294), adequately sums up Gramsci’s views on language and common sense.

The collected essays provide a detailed introduction to the complex ideas of the Italian philosopher. They show the originality and independence of his thought, and enable one to see in Gramsci the forerunner of current trends in, among others, discourse analysis and translation theory. An accompanying volume, an anthology of Gramsci’s texts (or just relevant fragments) dealing with language and translation, together with a glossary of Gramsci’s often highly idiosyncratic terminology, would be an idea worth considering.