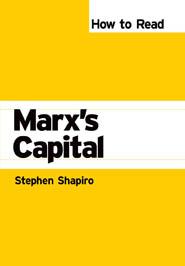 Ryan Singh Paul is a Visiting Assistant Professor of English at Allegheny College. He works on …

The global economic crises of the twenty-first century have generated renewed interest in Marxist theory as policy makers and citizens attempt to understand why capitalist markets have imploded. But the theoretical density of Marx’s texts, not to mention the often complex formulae he employs to describe the exploitative operations of capitalism, can intimidate new readers. A number of commentaries and guidebooks have appeared in recent years in response to the new interest in Marx and the need for assistance in navigating his writing; for example, Peter Osborne’s How to Read Marx (W.W. Norton, New York, 2006) provides a brief overview of Marx’s major works, and David Harvey’s A Companion to Marx’s Capital (Verso, London and New York, 2010) offers an extensive analysis of Marx’s magnum opus. Stephen Shapiro’s How to Read Marx’s Capital falls somewhere between these two works, which is both its strength and its weakness. Neither as broad as Osborne’s overview nor as in-depth as Harvey’s commentary, Shapiro’s text offers a compact, readable introduction to Marx’s dense and difficult work; it is suitable for the uninitiated but not particularly useful for anyone already familiar with Marx or the central arguments of Capital.

The first part of Shapiro’s title is something of a misnomer: the book does not so much teach one “how to read” Capital as summarize it. Shapiro follows Marx step-by-step through the text, offering simple, direct explanations of Capital’s arguments and explaining how each section fits into the book’s overall project. Shapiro’s language is clear and concise; readers new to Marx or lacking a background in economics will readily understand his descriptions of use- and exchange-value, the operation of money, the generation of surplus-value, and other key concepts. Especially helpful are Shapiro’s renderings of Marx’s algebraic analyses of capitalist economics. Shapiro explains in simple language the mathematics behind Marx’s arguments and translates them into verbal equations that represent visually the relationships and operations that Marx describes. Shapiro also quotes Capital extensively, including key portions of Marx’s text that he then summarizes and explains. The examples that Shapiro employs to clarify some of Marx’s more abstract ideas often come directly from the original text, but Shapiro explains them thoroughly, leading the reader through the processes Marx describes.

Despite these strengths, the book is lacking in important features that would make it truly a guide to reading Capital rather than a summary of it. Shapiro does not, for example, provide much in the way of historical context, something that would be very useful to a student attempting to understand the nature of Marx’s project; nor does he relate Capital to Marx’s other works. Students wishing to learn how to read Capital would also find some additional textual apparati useful: there is no glossary of key Marxist concepts, no timeline of Marx’s publications; the index does not even include the phrase “political economy,” a surprising lacuna given Shapiro’s remit. One would also think that a guide to Capital would include some discussion of the work’s possible applications to contemporary politics and economics or its influence on twentieth- and twenty-first century critical theory. Instead, Shapiro stays almost entirely within the world of the text, offering little in the way of critical analysis or application. However, he does provide a list of “Suggestions for Further Reading” that includes both introductory and advanced discussions of Capital. This list includes many fascinating and insightful sources that even the specialist would find useful. And while the analytical scaffolding of Shapiro’s reading is thin, he does explain Marx’s organization and the logic of Capital’s progress. Shapiro clearly explains how Marx’s initial discussion of the commodity establishes the foundation for his later explanations of the production of capital, surplus-value, and the effects of capitalism upon workers, and Shapiro repeatedly clarifies how Marx’s ideas in each chapter relate to the text as a whole, even explaining how the apparent contradictions Marx introduces set up their resolution in later chapters. Finally, Shapiro returns time and time again to Marx’s gothic metaphors, using the image of the capitalist as vampire to remind the modern reader of the nature of Marx’s critique.

Ultimately, Shapiro’s How to Read Marx’s Capital is a solid and enjoyable introduction to Marx, although its relative merits and deficiencies when compared to other, similar texts make it difficult to determine its ideal use. Clearly intended for undergraduate and beginning graduate students, Shapiro’s book is too focused on a single text for a general course on theory while too basic for a course that centers entirely on Marx or Capital. It is perhaps most useful for the faculty member who will only teach sections of Capital but wants students to gain a sense of the text as a whole, or for the general reader who wants an overview of a foundational text but is not ready to tackle more advanced analyses. Its greatest virtue is that it provides the reader with a solid understanding of Marx’s most important and influential – and misunderstood – text. It is to be hoped that works such as this one will help to promote Marxist philosophy in a time when alternative models to capitalism are desperately needed.