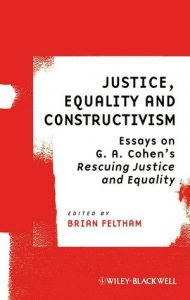 James Hall completed a MA in Legal and Political Theory from UCL in 2010, with a dissertation …

G.A. Cohen’s Rescuing Justice and Equality (RJE) provides perhaps the most impressive moral critique of the philosophical foundations of liberalism that the Marxist tradition has produced thus far. While the later Cohen was not a Marxist in any meaningful sense, his work provides compelling evidence of the powerful arguments that can be mustered against capitalism, independently of grand empirical theses about man, history and society.

The seven essays in this critical volume, originally from the journal Ratio, address the major themes covered in RJE. However, the contribution of some pieces to new analysis of Cohen’s work is slightly strained. One (Christiano and Braynen, chapter 3) engages with RJE only by way of a very short appended section at the end of the chapter, while another (Lippert-Rasmussen, chapter 4) deals only with RJE’s long published and extensively discussed initial 3 chapters, ignoring recent material. A third (Otsuka, chapter 3) is somewhat insubstantial after “half the text had to be abandoned in the face of insuperable objections” (74). However, these minor gripes aside, there is much to find appealing in the contributions, all of which are rigorous and illuminating.

To set the scene: the major substantive disagreement between Rawls and Cohen is over how much inequality the just society allows. Rawls’s famous difference principle – which applies only to the major public institutions in society – advocates that any inequalities are just as long as they ensure that the worst-off class is maximally well off. By contrast, Cohen believed that justice places duties on individuals as well as institutions and that no inequality is truly just unless it can be explained by a genuine difference in fault or choice on the part of the individuals concerned. Conversely inequalities are unjust to the extent they are brought about by sheer luck. Cohen considers this ‘luck egalitarian’ principle to render illegitimate the vast majority of inequalities in contemporary capitalist societies, including some of those permitted by Rawls.

The first essay, from Richard Arneson undertakes the broadest examination of this thesis. Early on Arneson expresses agreement with Cohen – and contra Rawls – that justice indeed places duties directly on individuals’ personal conduct rather than (merely) on their attitudes towards public institutions (6).

However, this agreement aside, Arneson finds a number of faults in Cohen’s account. We can distil these into two main claims. Firstly, that Cohen is mistaken to find an inconsistency in Rawls’s avowal that we can consider a luck egalitarian prescription initially just, before arriving at an eventual realisation of the justice of (limited) inequality. Secondly, that Cohen’s positive argument for equality is independently flawed.

As far as the first argument goes, I find Arneson’s reading of Rawls controversial and – separately – his treatment of Cohen ineffectual. Arneson is clear that he interprets Rawls as saying merely (i) that a reliance on arbitrary differences between people cannot be used to justify any distribution – egalitarian or otherwise rather than the stronger claim (ii) that reliance on arbitrary differences between people is enough to condemn that distribution from the point of view of justice. However, there are manifest examples which suggest against Arneson’s reading (e.g. Rawls, 1999, p. 63).

Rawls exegesis aside, Arneson’s critique of Cohen on this point is moot unless we simply assume that Arneson/Rawls are right (and Cohen wrong) about the definition of justice. Arneson states that justice is not – as Cohen believes – what is ‘ideally fair’, but – as Rawls believes – an all-things-considered standard of the right course of action to pursue. It is only in virtue of this un-argued definition that Arneson is able to support his claim that there is no problem with Rawls first prescribing equality and then prescribing something other than equality.

If we are deciding on a right course of action (whether to achieve socialism or something else), competing values and facts are all important in boiling down what is to be done. However, this is clearly not Cohen’s project, as he sets out explicitly in the second part of RJE. Given that Arneson offers no argument for his/Rawls’s definition of justice, his mere assumption of it to score points against Cohen’s substantive claims is not persuasive.

The issue of the reconciliation of efficiency with equality is taken up in the second chapter of the book, courtesy of Thomas Christiano and Will Braynen. The authors suggest that egalitarians should advocate a conception of equality that is sensitive to the absolute level of persons, not merely how those persons fare relative to one another. The chapter is dedicated to fleshing out this idea in order to construct a plausible rejoinder to the ‘levelling down objection’. While containing interesting passages – in particular, an argument that a concern with absolute levels follows necessarily from any egalitarian principle (31-2) – it only sparingly engages with RJE and so will not be discussed further here.

Chapter 3 discusses a number of somewhat disparate issues regarding Cohen’s earlier work – reprinted as chapter 1 of RJE – on inequality-producing market incentives. The author defends three quite technical claims about the nature of the argument that Cohen makes against Rawls, bringing a welcome precision to bear. I will focus on the first claim, which seems to me to be the most important.

This claim argues that just because we can justify an incentive, it does not follow that we thereby justify any inequality that flows from that incentivisation. Among other things, Lippert-Rasmussen goes on to accuse Cohen of failing to see this independence and thus restricting his range of egalitarians prescriptions (60). However, while interesting, it is unclear whether this is true. Rather it seems that Cohen was interested in a particular case of the way in which incentives have generated inequality, viz. the Thatcher tax cuts in the late 1980s.

The phenomenon that really seems to be at the locus of Lippert-Rasmussen’s case is an incongruity between Cohen’s earlier and later work. As Lippert-Rasmussen points out, the independence of incentives and inequalities means that it is technically possible to envisage a system of taxation where there are incentives which strictly maximally benefit the worst off. The question as to why Cohen promoted a solidaristic ‘egalitarian ethos’ over such an option is interesting in the light of the changing role that the idea of solidarity, or community, has played in his work. Whether or not Cohen is right on this point continues to be an important area of debate, with important implications for socialist thought.

Michael Otsuka’s chapter 5 focuses on an apparent deficiency in Cohen’s explanation of why the state is not justified in forcing people into a particular line of work to enforce equality. Readers will recall from RJE that Cohen believes in equality-promoting progressive taxation. However, he maintains that there is a difference between requiring persons to shoulder a greater tax burden on the one hand, and requiring them to change occupation on the other. The basis for this distinction is, Cohen says, the ‘invasiveness’ involved in collecting and using the necessary data about people’s optimum talents in the latter case. On this ground, he argues, workers in the just society should be allowed ‘freedom of occupational choice’, even at the expense of (greater) equality.

Otsuka offers three objections: (1) A problem still exists in the one job case because of the choice between working that job and not working at all (77); (2) Cohen seems to suggest that it is persons being forced against their will that makes invasiveness a problem (i.e. invasiveness is permissible if merely because of informational rather than motivational difficulty) but if people are acting unjustly, we can surely ignore what they want (79); and (3) we can imagine cases where there is no invasiveness required to see that persons would be more productive in another line of work – but requiring them to change jobs still seems objectionable (81).

I suspect the first objection underlies a broader criticism: that, in fact, Cohen’s grounds for worry – the invasiveness of the state – has very limited application to the kind of circumstances he worries about – the conditions under which we can permissibly depart from equality. However, I am not sure that either this or the central third criticism warrant Otsuka’s consequent advocacy of rights of self-ownership as an alternative to Cohen’s appeal to invasiveness. This is because it does not seem plausible, particularly in light of Cohen’s other writings on this subject in If You’re an Egalitarian, How Come You’re So Rich?, that the invasiveness criteria is exhaustive of the justifiable reasons for departing from equality. By focusing only on invasiveness, Otsuka’s critique seems under-cooked.

The final two chapters in the collection, from Thomas Pogge and Andrew Williams respectively, are the only two to deal with the second part of RJE, which is a far less polemical defence of the concept rather than of the content of justice.

The upbeat tone of Pogge’s piece (“It is heartening then to find an intrepid philosopher rescuing… two prominent damsels in distress. Civilisation saved by a timely intervention!” (88)) belies a serious criticism of one of the grander claims Cohen makes about justice, namely that all (fundamental) principles of justice are fact-insensitive. Pogge’s counter-claim is, roughly, that in fact there are two different types of fact-(in)sensitivity, only one of which is vulnerable to Cohen’s criticism. Furthermore, he claims that the theorists Cohen is attacking can costlessly switch between the two types of fact-(in)sensitivity, thus side-stepping Cohen’s criticism.

Pogge’s attack is a formidable one and I can see no easy retort for Cohen. Nevertheless, it is unclear how far this affects Cohen’s substantial arguments in favour of equality, which – arguably – are substantially independent of his more rarefied claims about justice and fact-sensitivity.

Andrew Williams provides the final, short, piece in the compendium in which he argues, firstly, that Cohen’s charge that Rawls merely specifies ‘rules of regulation’ as opposed to ‘fundamental principles of justice’ may not be correct because the distinction is non-exhaustive. Secondly, and more pertinently, Williams suggests that there may be a reconciliation between Cohen’s and Rawls’s views on justice, to the extent that they might be answering different questions (124).

This is perhaps not an original thought, as Cohen implies it at a number of points in RJE. It also seems to suggest that there is more philosophical work to be done in this area. What are the independent reasons for favouring Rawlsian constructivism about justice? What is the relationship between Rawls’s and Cohen’s projects? On these points Williams is unfortunately silent.

Justice, Equality and Constructivism is an important and interesting book, which repays careful reading. There is a wealth of analysis here from some of the sharpest minds in contemporary political philosophy. G.A. Cohen’s writings will continue to ask important questions of the egalitarian liberal establishment and this book will provide a useful aide to understanding his last major work.