Marx & Philosophy Review of BooksReviews‘The Hegel Variations: On the Phenomenology of Spirit’ reviewed by Paul Sutton 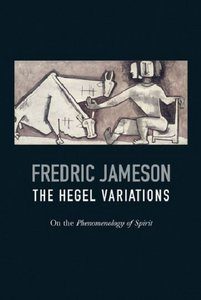 Fredric Jameson
The Hegel Variations: On the Phenomenology of Spirit

Paul Sutton has written on Iain Sinclair and Frank Zappa and is now, at least in the intervals left …

The title of this elegant little volume bears eloquent witness to its import and intent. After all, is it not customary for Hegel commentators helpfully to compare the Phenomenology with the sonata or the Bildungsroman? The former, with its triplicity (exposition, development and recapitulation) and satisfying resolution, and the latter, with its concern with the subject’s mature transcendence of its conflict with society, would appear to map perfectly onto what have respectively come to be understood as the dialectical ‘method’ and the content of the Phenomenology. Jameson, however, insists not upon the triumphant synthesis of sonata form, but upon the compulsive and restless repetition-which-is-not-repetition of variation form; it is the grit, not the pearl, which interests him. Like Adorno, he discerns truth in Hegel’s notorious stylistic rebarbativeness, ‘for what often look like tortuous or inarticulate sentences prove to be carefully planned performances in the systematic changing of linguistic valences’ (43). Similarly, ‘it is not (it is no longer) a good idea to think of the Phenomenology as a kind of Bildungsroman, a form which, in a true Enlightenment spirit, tells the story of the progression of an immature subject to a state of maturity’ (16), for to do so would be to confer an unwarrantable historicity upon Absolute Spirit and, as the book’s final sentence insists, in an echo of its first, ‘as for Absolute Spirit, it is above all urgent not to think of it as a “moment”, historical or otherwise’ (131). Jameson’s is a polemical reading that seeks to rescue Hegel, not just from those post-structuralists and liberals who would traduce him as a complacent teleologist and system builder, but from that later, encyclopaedic Hegel who, in the aftermath of political defeat, was not always vigilant in guarding against a reified ‘Hegelianism’.

A famously digressive and omnivorous writer, impatient with historical, geographical and disciplinary limits, Jameson is here notably single-minded and concise, even terse, concerning himself almost exclusively with the Phenomenology and its secondary literature. Moreover, the structure of Jameson’s text is modelled upon that of its object. The book’s first two chapters, ‘Closure’ and ‘Organizational Problems’, are, like Hegel’s preface, concerned with setting forth an anti-programmatic programme. This is no mere recapitulation, though, for Jameson’s history of intrepid and agile encounters with non- and anti-dialectical thought, though worn uncharacteristically lightly, is crucial in informing his approach. Indeed, the book opens with a ringing endorsement of a central argument of anti-Hegelian critique: ‘developmental narrative’, Jameson argues, ‘… is to be vigorously repudiated by modern, or at least by contemporary, thought of whatever persuasion’ (1). (Note, however, that as with the Bildungsroman remark quoted above, the seemingly anti-Hegelian sentiment is subject to an eminently Hegelian historical qualification – the Bildungsroman is no longer relevant, developmental narrative must be repudiated by contemporary thought). He insists upon the relative and repudiates the absolute (space does not permit a discussion of how these and similar post-structuralist strategies are secretly and in spite of themselves nothing if not dialectical; in any case this has long been a favourite theme of Jameson’s). Absolute Spirit is to be read ‘as a symptom rather than a prophecy’ (4). As for the dialectic, it’s a word ‘Hegel uses very sparingly indeed’ (1), and here, as elsewhere, Jameson is keen to promote the claims of duplicity and, even, quadriplicity, over those of triplicity. He calls upon Adorno’s study of Beethovenian variation to anathematize the idea of a ‘set of stable names for philosophical problems and their putative solutions’ (25). His concern is always to problematize and historicize, and he accordingly insists that the Phenomenology as such is anomalous and untimely. Intended as a teaching manual and, in the wake of political reaction, superseded in the author’s lifetime by the Encyclopaedia, it was only relatively recently rediscovered by the likes of Kojève. This lack of fit with both the Hegelian ‘system’ and the post-Napoleonic political settlement is precisely what Jameson finds productive. Many have seen the same lack of fit between the first three chapters of technical philosophy and the succeeding, merely sociological, chapters, but to do so, Jameson argues, is ‘to presuppose that there could be any coherent individual perspective outside the collective existence in which individuals always find themselves’ (16). Accordingly, the Phenomenology progresses (not necessarily chronologically) from a bracketed pre-subjective consciousness, to self-consciousness and thence to Spirit (‘the words Spirit or Geist have nothing to do with spirituality nor even with consciousness itself as such … the word “Spirit” always designates a collective’ (13)). And here, Jameson argues, the Phenomenology should end, the concluding chapters on religion and absolute knowing being respectively out of place and perfunctory.

‘The Ethics of Activity (die Sache selbst)’ considers the ‘Lord and Bondsman’ chapter, famously interpreted by Kojève. Jameson’s own initial interpretive move is polemically to reverse polarity, so that the inessential bondsman who, through his labour, produces the essential lord, thereby himself becomes essential and displaces his master. In a second move, Jameson insists, not upon the bondsman’s productivity, but upon his negativity. While the noble and idealistic lord owes his prestige to his reckless martial virtue, the bondsman is a base, self-solicitous coward. Yet the bondsman’s anxiety and capitulation to ‘“the absolute Master, death”’ foreshadow freedom and scepticism, the ‘power and exercise of the Negative that breaks up and dissolves everything substantial in its path’ (56).

It therefore becomes less clear that it is the Master, who, rising above the body and its satisfactions, holds the place of wisdom; here, rather, the value of negativity trumps idealism and constitutes a philosophically more satisfactory force of the dissolution of the physical (and of everything else) than the Master’s ignorant Samurai-like fearlessness. (56)

This absolute negation of death and destruction is then contrasted with the determinate negation of production. Moreover, this is socialized beyond the intersubjective dyad of the Lord/Bondsman dialectic; as Hegel observes,

A consciousness that opens up a subject matter soon learn that others hurry along like flies to freshly poured milk, and want to busy themselves with it; and they learn about that individual that he, too, is concerned with the subject-matter, not as an object, but as his own affair. (67)

While the ‘Lord and Bondsman’, notwithstanding its specific historical form, has its abstractly intersubjective moments, Hegel’s treatment of Antigone represents a move into the properly social. ‘Spirit as Collectivity (Antigone, or the One into Two)’ insists on Creon, the representative of abstract state authority, being given due weight, not because the actual is the rational, but because societies are constituted by the very contradictions that tear them apart. The contingent and historical conflict between tribal piety and civic virtue is not at issue here, but, rather, contradiction or differentiation as such, which Hegel both describes and deploys as a strategy, ‘it is in the multiplication of such [binary] oppositions that this strategy of dereification is most successful’ (87).

‘Revolution and the “End of History”’, directly addresses the current situation, arguing that the truth of Kojève’s controversial concept is to be found on the social, not the political or economic level. Globalization and its attendant cultural standardization have all but dissolved the traditional bases of privilege. However, although the world is certainly humanized to an unprecedented degree, it is not thereby subjectivized. It yet remains for humans to recognize, not the other, but themselves, ‘Hegel’s originality in his proposal for a post-Kantian ethics is to have reoriented the emphasis from obedience to the law and the state to the very production of these collective institutions’ (111).

What then is more predictable, at least in our earthly human history, than the progressive enlargement of that population of others to be included in the fateful philosophical world? … the Hegelian dialectic … must now be reconjugated in terms of a world market that is only in the process of finding and inventing the conceptuality appropriate to it. (115)

Such is the ringing conclusion of The Hegel Variations, for the following two chapters have, in line with Jameson’s view of Hegel’s final two chapters, the air of afterthoughts. Nevertheless, he takes the opportunity to revivify the religion chapter by proposing, in a separate text, to elaborate it as a theory of the cultural superstructure, thereby resisting any tendency this brief, eloquent and dense study might have towards closure. The Hegel Variations is not an ‘explanation’ of the Phenomenology, lucid and digestible though it is, but a performance of the dialectic and, as Jameson hints, taking his cue from Adorno’s discussion of Beethoven, a set of variations on a theme (Hegel? Die Sache selbst? The dialectic? Absolute Spirit?) that must remain unstated. Constitutively provisional, yet cogent, this powerful text sends the reader not just back to Hegel, and, indeed, Jameson’s own ongoing project, but, more importantly, to the present moment of triumphant globalization which marks not, indeed, the end of history, but the beginning (whatever its valence might turn out to be).