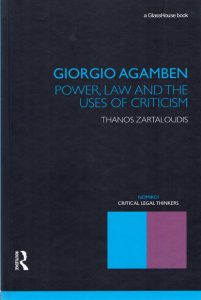 Zartaloudis begins his insightful but exhausting discussion of Agamben’s work by relating it to what is perhaps the central issue of legal studies, the ontological question of “what is law?” (1). Justifying his critical approach to legal studies, Zartaloudis summarily claims that “I did not find satisfactory answers to this question in … conventional jurisprudence, in the gigantomachy between positivists and natural law theorists” (ibid.). Instead of engaging with the problem of foundations, Zartaloudis asserts that in his field’s literature can be found only its repeated and self-referential evasion through the grounding of law in an allegedly transcending “Law of law” defying further explication (ibid.). His turn to the work of Agamben on the question of law is thus inspired by the problem of foundational logic, of self-reference as an exercise in ontological, rather than merely operational, closure. Because Zartaloudis is concerned with this ontological issue, his ensuing discussion of Agamben is pitched at a fairly abstract level, which, while yielding a reading that is powerfully thematic, is also rather unfocused and somewhat tedious. As such, this is not a book I would recommend to those new to Agamben, although those already familiar with his thought will be rewarded with an insightful, albeit sprawling, reading.

The book’s central claim, pursued across its seven chapters, is that Agamben’s work demonstrates that law grounds itself in a mystified form which can be corrected only by understanding properly the nature of human potentiality. Constituting itself by means of an internal gap, a suspension of its rules of application to itself, law creates the appearance of an independently existing, transcendental source of quasi-legal authority; it is by means of such self-exemption that law is able to turn itself into what Zartaloudis early on terms a bi-polar structure, a “transcendent Law or Power and an immanent law or power” (6). This self-duplication via internal displacement allows law as a whole not only to present its own concrete actions as emanating from a source of authorization beyond them, but also thereby to conceal from scrutiny the mundane contingency of such activity. Presenting its foundation as separate from its mundane activity, legal practice is able to create the illusion that its mundane activity is not something for which it can be held directly responsible, since its mundane activity is merely the necessary effect of previously legitimated ends located elsewhere. Legal authority, then, is premised on mystified activity.

After presenting an overview of the logic of legal self-duplication, Zartaloudis moves on, in his second chapter, to a detailed consideration of political theology as it appears in Agamben’s as yet untranslated but obviously important book of 2007, Il Regno e la Gloria (The Power and the Glory). Agamben’s thesis in this book, as relayed by Zartaloudis, is that the long-standing tradition of political theology in the West has obscured an equally important theological tradition of oikonomia which is crucial to understanding the nature of the Western conception of political-legal authority. Oikonomia, the theory of divine “economy”, the governance or dispensation of the world, seeks to reconcile transcending and otherworldly divine authority with the actual practices of governing delegated to the institution of the church. This duplication of divine authority constitutes, according to Agamben, the Western primal scene of the logic of legal authority discussed above. Such duplication explains why it is that we never find the exercise of power without a corresponding glorification of power. If divine power and government are two modes of the same activity, the first a mystified projection of the second, the two can never line up. However, the glorification of power hides this non-coincidence, allowing the structure as a whole to perpetuate itself through the intermediary of glory. In Agamben’s reading of the tradition, according to Zartaloudis, political theology is set in motion on the back of oikonomia, and it is only by understanding the latter that we are able to see through the ideological character of modern power.

Continuing this line of argument into his third and fourth chapters, Zartaloudis discusses specifically sovereign power as it appears in Agamben’s better-known works in the English-speaking world, Homo Sacer and State of Exception. In his discussion of these books, Zartaloudis once again shows the way in which sovereignty constitutes itself as a practice through the familiar bipolar split in which the two levels of constitutive and constituted are resultant form a single power of acting. Once again Zartaloudis is concerned to show that the two levels of sovereign power do not line up, and so allow for the inclusion of something supposedly exterior (the people or bare life), created by power itself, to be presented as though it existed independently of and prior to sovereign activity.

While the next three chapters maintain the same focus on the bipolar activity of legal ontology, Zartaloudis introduces a decisive shift of emphasis with his treatment of language. Beginning with a discussion of Agamben’s recent account of oaths in The Sacrament of Language, Zartaloudis argues that for Agamben the possibility of legal self-referential constitution is based in turn on language’s mode of self-reference. If oaths are the primitive form of constituting legal obligation, they do so not by representing a state of affairs outside of them, but instead by making their own declarative force appear independently of the declarer, by presupposing the relationship between words and things which is established by the oath. Ultimately, Zartaloudis locates the significance of oath-taking in a moment of fidelity, a declaration of faith that the relation between words and things is the way it is declared to be. Tracing this idea back to Agamben’s more literary work on language, Zartaloudis argues that for Agamben language is not about representing what is outside it, but is primarily about “revelation itself” (203). The basic argument here is that language’s potential to establish representations is founded on the invisible potentiality of language itself. Accordingly, the existence of language is the existence for human beings of potentiality as such, the power to compose relations between words and things.

This claim is dramatically supported by Zartaloudis’s extended tour of Agamben’s discussions of linguistic potentiality as a kind of limit-experience of the self-referential grounding of law and sovereignty. With Bartleby’s utterance “I would prefer not to”, Agamben arrives at linguistic potentiality as a kind of passive capacity prior to its splitting the world into word and thing, and prior to a tradition that presupposes this split in a mystified form; in “preferring not to” Bartleby deactivates language’s external reference better to expose its potential for signification.

Building on this discussion of linguistic potential, Zartaloudis concludes his book with an elucidation of how Agamben’s work can serve to demystify transcendental presuppositions of law. If legal mystification is founded on the presupposition of a transcendental ground, shrouding its judgments in inscrutable authority, deactivation of the law will consist of showing that inscrutability is but a function of its own mundane activity. Such deactivation will in effect fulfill the law, since it will subject it to what Agamben calls profanation. In removing the dimension of transcendence, profanation returns law to humanity in the form of its purely mundane practice. Robbed of its “majesty”, profanation returns law to what it really is, namely, a useful tool for the organization of human activity. According to Zartaloudis, the problem with law is that, in being yoked to the mystifying edifice of power and glory, its original rootedness in concrete indeterminate potentiality is overlooked, as this edifice seeks to present its purposes as ends that exist beyond the generic being of humanity.

While there is much of insight in Zartaloudis’s book, the main reservation I have is the difficulty in separating Zartaloudis’ voice from Agamben’s, a problem which results in a reading of Agamben that lacks critical distance. For instance, Zartaloudis does not inquire into the issue of how the depiction of sovereign power as governance in Agamben’s most recent book squares with the way it is presented as spectacular violence in earlier volumes of the Homo Sacer project. Perhaps doing this would demand a discussion of Agamben’s relation to Foucault, something Zartaloudis mostly avoids. On the whole Zartaloudis has presented an insightful reading of Agamben in the context of legal studies, but prospective readers must reconcile themselves to some hard slogging in order to obtain it.