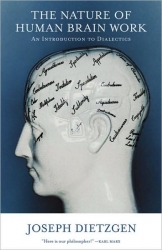 Joseph Dietzgen
The Nature of Human Brain Work: An Introduction to Dialectics

In September 1868 Joseph Dietzgen, a self-educated master tanner from the Rhineland, sent Karl Marx a manuscript on the ‘faculty of thought’ asking for advice on whether to publish it. The following year there appeared The Nature of Human Brain Work – A Renewed Critique of Pure and Practical Reason (NHBW), now made available again in the original 1906 English translation by Ernst Untermann with a biographical sketch by Larry Garbone.

Dietzgen, who had long considered himself a follower of Marx, had been inspired to write a work on the basis of human thought and knowledge by both his ‘longing for a consistent and systematic conception of the world’ and by the political belief that only the working class could potentially understand the world independently of narrow class interests.

Today Dietzgen is generally a forgotten figure in Marxism. Having been described as everything from a positivist and empiricist to a forerunner of Western Marxism, an inconsistent materialist and a necessary supplement to Marx, one might conclude that Dietzgen was a hopelessly inconsistent philosopher. In fact, reading Dietzgen as a whole, a coherent, if not always consistently expressed, set of ideas emerges. NHBW is their first formulation.

Dietzgen begins by discussing the nature of philosophy and contrasting it to science. Speculative philosophy develops reason out of thought itself without reference to the material, sensuously experienced world. As science has advanced, the realm of speculation has diminished and, if philosophy is to be the most general of sciences, it has to concern itself not with idle speculation but with ‘explain[ing] the general nature of the thought process’ (16). At the same time, Dietzgen rejects one contemporary alternative to idealism in Germany, the reductionist materialism of Büchner, Vogt and Moleschott. He acknowledges that`thinking is a function of the brain and nerve centre just as writing is a function of the hand. But the study of the anatomy of the hand can no more solve the question: What is writing? than the physiological study of the brain can bring us nearer to the solution of the question: What is thought?’ (17)Thought has to be explained in terms of the faculties of mind rather than brain function (thus ‘brain work’ in the title might be better translated as ‘mental labour’).

Dietzgen bases his analysis on a monist ontology in which the world is one interconnected whole, which is merely the most abstract and general form of existence. All our thoughts only deal with parts of this whole and are defined in a particular context: ‘Perfectly true, perfectly universal is only the general existence, the universe… But the real world is absolutely relative, absolutely perishable. All truths are simply parts of this world, partial truths.’ (42)

There is nothing else, no unknowable ‘thing in itself’ hiding behind the manifestations of general existence which we experience through our senses. ‘Phenomena appear, that is all.’ (36) Knowledge is never complete, yet has no a priori limits.

From this, Dietzgen derives a dialectic in which ‘opposites are mutually relative’ (43), that is, interdependent and contextually fluid, and investigates pairs such as truth and error, matter and mind, cause and effect, part and whole and means and ends. However on occasion, Dietzgen blurs important distinctions by asserting the identity of two concepts when they have a more complex relationship.

Thought has then for its object, without which it could not exist, the sense impressions given to the mind by ‘the passing and manifold manifestations of nature and life’. (43) However they do not simply define the content of thought – as claimed by those who accuse Dietzgen of having a ‘reflection theory’ of consciousness. Rather they are ‘raw material for our brain activity’. (36) Thought has an active role in forming the material supplied to the senses into forms of thought. Specifically, thought abstracts from the infinite interconnections of its object and generalises from the immediate and individual perceptions of the senses (‘the concrete’) into categories it uses for the purpose of understanding (‘the general’). Different abstractions and generalisations are possible from a particular set of sense impressions. Dietzgen does not directly address the issue of how then shared and scientific concepts arise but points to the role of scientific method in distinguishing truth from error and notes in passing that ‘science is as much as social matter as material production’ (5-6) and that the ‘truth of theory is manifested in practice’ (36,5).

For Dietzgen, sense impressions are not merely that which is physically tangible, audible etc. Imperceptible forces such as gravity, magnetism and electricity are just as material. But Dietzgen more controversially claims that ‘the intangible idea is also material and real. I perceive my idea of a desk just as plainly as the desk itself…’ If there are objections to the word ‘material’, he continues, we can call mind real, ‘as real as the tangible table, the visible light, as the audible sound.’ (18-19)

Thought can thus take itself as its own object and this creates the possibility of speculative philosophy that cuts itself off from sense impressions. This move led Lenin (1972) to accuse Dietzgen of making concessions to idealism but he is rather seeking to explain how idealism can come about. Seeing thought as real also provides an important corrective to the vulgar materialists and empiricists. ‘The idealist regards reason alone as the source of all understanding, while the materialist looks upon the world of sense impressions in the same way. Nothing is required for a solution of this contradiction but the comprehension of the relative interdependence of these two sources of understanding.’ (69)

The transformation of sense impressions into forms of thought enables Dietzgen to arrive at a unity in which thought is both active in ordering the world and creating our ideas while being based in a material reality. This would later lead to Dietzgen coining the term `dialectical materialism’ to describe his philosophy.

In the last two chapters of NHBW Dietzgen uses this worldview as a basis for critique in the fields of natural science and of ethics and morality. He criticises scientists who, once they stray outside their own field of science fall prey to all sorts of philosophical errors. He does this by examining dialectically the three relationships between matter and mind, cause and effect and force and matter.

Dietzgen then seeks to contextualise those ideas presented as eternal moral truths. He here uses a historical materialist method, tying morality to human needs expressed differently in different times and contexts and thus arrives at a class definition of morality : ‘the Russian noble considers serfdom a rational institution and the English bourgeois the so-called liberty of his wage worker, both of these institutions are not absolutely rational, but only relatively in a more or less limited circle.’ (84) The basis of a false eternal morality lies in taking these historic forms as absolute. Dietzgen similarly derives a dialectical understanding of ends and means, asserting here what Ollman (2003) attributes to Dietzgen as a philosophy of internal relations: ‘Things are what they are only within and by their interrelations. Circumstances alter cases.’ (97)

NHBW is the first work in what can be broadly called Marxist philosophy not written by Marx and Engels. Engels (1990) later famously cited it as showing Dietzgen to have discovered ‘materialist dialectic… independently of us’ (not wholly accurately – Dietzgen had been familiar with several of Marx’s writings and had discerned a philosophical element in Capital). Marx (1988) noted the strong influence of Feuerbach, with whom Dietzgen corresponded, in NHBW, while Dietzgen had stated that he had not read Hegel, which Marx saw as a weakness among ‘much that was excellent’ in NHBW. His account of the processes of conceptualisation is, from this viewpoint, incomplete. While his starting point is similar to Hegel’s, his dialectic does not form a system and skips some dialectical categories of importance to Marx. NHBW thus perhaps indicates the possibilities and limits of a Marxist philosophy based on Feuerbach rather than Hegel.

Dietzgen’s ideas are sometimes expressed in somewhat clunky prose and he sometimes repeats himself. However NHBW should be read, firstly for its significance as the thought of an early Marxist, the first to develop philosophical ideas and to reach an independent understanding that was both dialectical and materialist. But it is of more than purely historic interest. There are several ideas in NHBW that are important in their own right. Firstly, Dietzgen’s dialectical monism enables him to develop a theory of knowledge which he uses to attack the idea that there are aspects of the world that are unknowable. He later used this to critique the emerging neo-Kantian school in Germany. Secondly, his insistence on the need for a theory of mind as well as of brain activity points towards the need for a critical psychology at a time when that discipline did not even exist. His statement of the materiality of thought underpins this and enables him to give a materialist explanation of speculative thought. Finally, Dietzgen’s account of the processes of abstraction and generalisation in the formation of concepts remains of wide application. It finds echoes 60 years later in Vygotsky’s (1986) account of conceptualisation and has been applied today in fields as different as Marxology (Ollman, 2003) and information systems (Robinson, 1997).

The republication of NHBW is welcome and will hopefully lead to a revival of interest in Dietzgen’s writings, few of which are readily available today.