Marx & Philosophy Review of BooksReviews‘Marxism and Scientific Socialism: From Engels to Althusser’ reviewed by Jamie Melrose 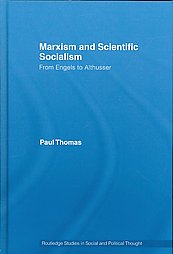 Paul Thomas
Marxism and Scientific Socialism: From Engels to Althusser

The picture of ‘Engels in the role of a banalizer and distorter of Marx’s thought’ (Timpanaro 1975, 77) is one that all observers of the history of Marxist thought are familiar with. The Marxian scholarly dichotomy between Marx and Engels is now fairly common. One can include Lucio Colletti, Sidney Hook, George Lichtheim, Zbigniew Jordan, Shlomo Avineri, and Terrell Carver as disseminators of it. Paul Thomas’s Marxism and Scientific Socialism fits squarely into this literary tradition; indeed, with his March 1976 article ‘Marx and Science’ in Political Studies, part of this book, he is very much at the forefront of the Marx and Engels ‘splitter’ vanguard.

The format of this book, a collection of individual essays, some reprints, gives it a reiterative character, perfect for Thomas’s anti-Engelsian scholarship, which, again and again and again, challenges Engels’s interpretation of Marx and his introduction of scientific socialism under the guise of a Marxian concept. Marxism and Scientific Socialism provides yet another source for those who wish to remind themselves of a truism that is now pretty ubiquitous when dealing with Marxism: Marxism is not an extension of Marx.

The book comprises six chapters as well as an epilogue on Marx’s anthropological take on nature. These rather independent essays at first glance are interconnected by Thomas’s interest in the concept of scientific socialism, importantly nothing to do with Marx, and its genealogy after Engels’s introduction of the term in his Anti-Dühring. Thomas wants to elucidate the way that ‘[s]cientific socialism … became an article of faith among political stalwarts and academicians’ (4). Engels is the culprit in this story. It is thanks to him and ‘through the lenses [that he] so eagerly supplied’ (131) that we have the notions of scientific socialism and dialectical materialism, so alien to Marx’s writing.

In the first three chapters, Thomas deals with what Marx actually had to say on science, and how little it corresponds to what Engels thought of science. Similarly, in the fifth chapter on dialectical materialism, Thomas concludes his review of Engels’s, Georgi Plekhanov’s and Karl Kautsky’s ‘betrayal of Marx’ by comparing their desire for a Weltanschauung with Marx’s ‘discretion’ and lack of pronouncements on such a lofty aspiration (104). When Engels wrote, for example, of his dialectics as his and Marx’s dialectics in Anti-Dühring, the textual fact is that ‘Marx is nowhere on record as having agreed’ (46) with Engels’s definition. Thomas’s assessment of the done-down Marx and of Engels’s misappropriation of Marx’s theoretical inheritance is fairly standard: Engels is the advocate of overarching ahistorical social laws and the venerator of late nineteenth century scientific pretensions, while Marx is the sophisticated observer of the sheer contingency of social rules (28-9; 34). Marx understood science more along the lines of practical learning and knowing; Engels, more along the speculative lines of final knowledge, the end point of epistemology (x-xiii). When it comes to materialism, the reader is confronted by Engels’s advocacy of ‘the abstract materialism of natural science’ (44-5) in contrast to Marx’s contempt towards it. In the second chapter, in particular, ‘distortion’ (35-49) is the watchword; ‘the conceptual chasm’ (45) is the damning judgement on the real intellectual relationship between Marx and Engels. The third chapter makes the clear distinction between Darwin and Marx, previously complicated by titbits and references to Darwin in Marx’s and Engels’s writing and utterances. In fact, Engels confected ‘a link between Marx and Darwin’ (65).

Thomas is well aware of the lack of novelty in his findings. He quotes a recollected conversation with Sir Isaiah Berlin, noting approvingly Berlin’s questioning of the clichéd ‘fashionable contrast between Marx the sensitive humanist and Engels the “dreary positivist”’ (5). Thomas, though, while sharing Berlin’s disregard for such simplistic splitting of insightful master from poor clumsy pupil, does so in the spirit of more rather than less. That is to say, it is up to readers of Marx, Engels and the Marxists to be even more critical, to take the easy split between Marx and Engels, and to embolden it with an über-rational fidelity to what Marx actually said, rather than attend to what Marxists and lazy scholarship have taken to be Marx. It is a key proposition for Thomas ‘that Marxism, whatever contours any of its manifestations may have assumed, developed on the basis of an astounding ignorance of what Marx had written’ (3).

Chapters 4 and 6 move away from the comfort zone of Engels. Chapter 4 provides an account of the reception of scientific socialism by British Marxist scientists before the Second World War, and Chapter 6 explores Louis Althusser’s complicated relationship with science, politics and his own deviation from orthodoxy and embrace of the French tradition of historical epistemology. In the former chapter, Thomas contends that scientists such as J.D. Bernal and J.B.S. Haldane were part of an alliance with British Communists and the left-wing of the scientific community, all in thrall to the heady progress of the Soviet Union and its unifying of science and society. Optimism was responsible for scientific socialism’s uptake in Britain – an optimism finally exposed as more an item of faith by Stalinism, culminating in the Lysenko affair in 1947. In the latter chapter, Althusser’s attempts to balance a defence of Marxism as science with his commitment to the Communist Party and French academia, as well as rejecting ‘the simplistic base-superstructure polarity’ and ‘any version of historicism’ (114), are presented as flawed. Mainly, this is due to Althusser’s troubled relationship to the Enlightenment view of rational development. Althusser wanted to preserve the ‘good’ connotation of science – its definitive meaning as the ‘trump’ (126-7) in any discursive exchange – and to damn, simultaneously, the entwining of society, progress and science in modern capitalism.

In his epilogue, Thomas rounds off the book with ‘his’ Marx, Marx contra Engels, a Marx (who actually, following Thomas, should be the Marx) arguing for a form of praxis. Thomas highlights Marx’s consistent belief that men do not find themselves via an external theoretical model, but through a complex interaction and productive relationship with nature (143). Engels and ‘positivism of the Engelsian stripe’ (150) gets the boot put into them for the final time. Engels’s ‘clumsy’ synthesis of ‘freedom and necessity … nature and artifice’ (142) and his undialectical portrayal of cause and effect, motion and necessary outcome (143-4) are rejected.

Thomas’s textualist struggle to do away with Engels’s bastard creation, scientific socialism, is, according to Thomas, done in order ‘to establish that there is a different approach, an alternative’ (131) to Engel’s scientific Marxism. Thomas is not interested in ‘uncovering and dusting off a pristine, simon-pure Marx’ (ibid.), only in freeing Marx from the versions of Marxism that ‘led away from the Marx who really existed’ (ibid.). This is an odd thing to say. The apparent interpretive freedom given by feigning indifference to the one true Marx is then taken away almost immediately by positing that there is a measure, Marx, that is the means by which we can judge interpretations of Marx. Although Thomas concludes by claiming that what matters is not so much the misrepresentation, but more the fact it has been misrepresented, this feels like a throwaway statement. He is patently more concerned with the meaning, rather than the illocutionary force, the contextual intent, of scientific socialism. Though Thomas cites Wittgenstein’s statement that ‘[e]very sign by itself seems dead. What gives it life? – In use it is alive. Is life breathed into it there?’(9), the overwhelming dialogue within Marxism and Scientific Socialism is not the praxis-orientated Wittgensteinian epistemological question of how life or recognition comes to be breathed into a term; rather, it is what Marx actually and only meant versus a continued misunderstanding of this eternal meaning. Essentially, the dialogue at the heart of this book is between, on the one side, a quasi-eternal Marx seen with ‘an unjaundiced eye’ (131) – i.e., Thomas’s Marxian Marx – and, on the other, Engels and other Marxists, all of whom have misread Marx’s writings. We get allusions to Engels’s parochial context, his relationship with German Social Democracy and with the works of Darwin, but we never get a real flavour of how terms such as `scientific socialism’ functioned; how it was that science, for example, had such verificatory weight. It must be born in mind that scientific socialism acquired a certain degree of respect, not just amongst Marxist intellectuals, but amongst the European academic community, too. That is not to claim that figures such as Werner Sombart, Rudolf Stammler and Thomas Masaryk were advocates of scientific socialism. But they did take it seriously; it did register as a valid element for epistemological consideration. The sense, then, of how scientific socialism was part of the sensibility of its intellectual context is not present in this work.

In conclusion, Thomas wishes to advance the cause of neutral Marxians via his brand of exegetical hermeneutics. In Marxism and Scientific Socialism ideas are pregnant in texts, and then extracted, primarily in Thomas’s field of study, incorrectly. This book certainly provides a ready supply of bogus misreadings of Marx’s singular meaning in this cause. Thomas flags up tirelessly the analytical sloppiness of assuming a common identity for Marx and Engels. Students approaching Marx and Engels perhaps for the first time, reading this book, will come to know the key Marxian mode of dealing with Engels via a textual Marx. However, the account of scientific socialism’s rise to be an object under the figurative microscope of generations of historians, thinkers and social scientists, the story of how it came to be a power, is not addressed sufficiently. Engels undoubtedly misread Marx if you wish to employ the interpretive criteria of textual fidelity, a point that was not, for much of Marxism’s history, intuitive and that required generations of scholars to bring to the fore. However, Engels and the Marxists were also immersed in their own epochal epistemic practices, in their own contextual a priori, an account of which Thomas does not offer, despite his genealogical pretensions.