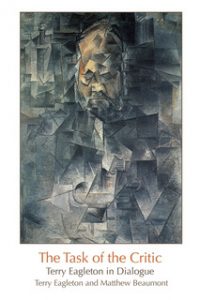 Terry Eagleton is one of the most prominent Marxist literary and cultural critics on the academic scene and a prolific writer in a variety of genres: he is a literary critic, philosopher, novelist, screenwriter, and playwright. What won him international recognition, however, was the publications of Marxism and Literary Criticism (1976), Criticism and Ideology: A Study in Marxist Literary Theory (1976), and Literary Theory: An Introduction (1983), especially the latter which has sold over a million copies and has been translated in many languages. These are works on literary criticism written from a Marxist perspective exploring the relations between literature, history, ideology, and power, aiming, at the same time, at rescuing criticism from its ideological past and transforming it into a political and emancipatory discourse. And though his commitment to Marxism, and to the idea of the literary critic as a social and political critic have remained unwavering throughout his career, as is evident from this book, Eagleton’s work demonstrates an openness to, and regard for, other theoretical trends such as structuralism, post-structuralism, feminism, psychoanalysis, and even left-wing theology, parts of which have been assimilated in his work at different periods of time and under different circumstances; yet he keeps a critical distance from those trends.

The Task of the Critic is a series of interviews conducted by Matthew Beaumont during 2008-9 with revisions, updates and supplements from other interviews. The title of the book is from a part of a project of Walter Benjamin’s, which was never published, and where Benjamin was attempting to “recreate criticism as a genre”. It fits nicely for Eagleton’s work as a whole. The order of the interviews is chronological, the content is both biographical (there is some overlap with his The Gatekeeper: A Memoir) and intellectual, with the emphasis on the latter, so that the book serves as an intellectual biography. Each interview has its own bibliography.

The book is compellingly readable, and Eagleton is at his best in it. He is an incendiary writer and public speaker, full of verbal energy, witty, playful, partisan and polemical in tone, while at the same time displaying enormous theoretical sophistication. The interviewer, Matthew Beaumont, a Senior Lecturer in English Literature at University College London, is equal to the task: well versed in Eagleton’s work, capable of approaching it with a critical manner that holds a balance between eulogizing it and criticizing it too severely; able to ask pertinent questions that, on the one hand, place Eagleton’s life and work in a wider context and, on the other, compel Eagleton to respond to criticisms of his work.

The interviews take us from Eagleton’s birth in an Irish Catholic immigrant working-class family, through his rise in various University posts, to his public quarrel with Martin Amis (who declared, after the London bombings, that “the Muslim community will have to suffer until it gets its house in order”) and his forced retirement from Manchester. This public controversy with Amis and the polemics against the atheists Dawkins and Hitchens highlight also a “metaphysical or theological turn” in his work lately, raising issues and ideas such as love, death, faith, tragedy, ethics that the Left, according to him, “has been coy about discussing” (286). What emerges from the book is that “theology and its emancipatory potential has long been an interest of [his]” (306), and this is also attested by publications over the years such as, The New Left Church (1966), The Body as Language: Outline of a ‘New Left’ Theology (1967), Holly Terror (2005), Reason, Faith and Revolution: Reflections on the God Debate (2009). They represent Eagleton’s attempt to reconcile religion and humanist socialism.

As becomes clear from the interviews, those ideas started to form at Cambridge where he studied and where he became politically active. In Cambridge, Eagleton studied with Raymond Williams, a left-wing literary/cultural critic whose work on politics, literature, and culture influenced Eagleton and encouraged him to view literature as a way of exploring and revealing the ideological manifestations of the epoch from which the work emerges. This influence is reflected in Eagleton’s work where he formulates a literary criticism that uncovers the ideology from which the text comes, employing Marxist categories that he constructs for this purpose.

The most important works that epitomize these ideas are Marxism and Literary Criticism (1976) where Eagleton, under the influence of Althusser, argues for the notion of the artist not as a creator of something but as a producer of a work that is ultimately determined by the social and ideological relations from which it emerges. In Criticism and Ideology (1976), he argues for a materialist critical procedure and develops components of a Marxist theory of literature such as the notion of the literary mode of production. In Literary Theory: An Introduction (1983), the most popular of his texts, he examines, from a Marxist perspective, alternative literary theories in terms of the social and ideological conditions in which they are found, in order to show their limitations.

In other works, such as The Function of Criticism (1984), he argues for a political literary criticism, while The Ideology of the Aesthetic (1990), illustrates how aesthetic perceptions are influenced by political and ideological relations. A quote from Criticism and Ideology gives a flavour of Eagleton’s idea of literary criticism at the time, “Criticism is not a passage from text to reader: its task is not to redouble the text’s self-understanding, to collude with its object in a conspiracy of eloquence. Its task is to show the text as it cannot know itself, to manifest those conditions of its making (inscribed in its very letter) about which it is necessarily silent. It is not just that the text knows some things and not others; it is rather that its very self-knowledge is the construction of a self-oblivion. To achieve such a showing, criticism must break with its ideological prehistory, situating itself outside the space of the text on the alternative realm of scientific knowledge.”

An interesting aspect that emerges from the interviews is his attempt to distance himself from Althusser and his own Althusserian phase. Though he thinks that “quite a lot of what (he) said …about literary production stands”, the notion of science employed at the time, under the influence of Althusser, was narrow, “how different would the thesis of the chapter on the science of the text look if one were to introduce the readerly dimension?” (138-139) We also learn that his Althusserianism at the time was mostly a support to Althusser’s fight with the PCF to establish the autonomy of theory rather than a fidelity to Althusserian concepts which he had “serious reservations about”, especially regarding the “expansionist definition of ideology” which leads to the “suppression of class struggle”, and the problem of evidence “in relation between theory and practice”. One would to tend to agree with this assessment of the early Althusser; but Althusser also changed his positions. It would be interesting to see the version of Marxism Eagleton is going to defend in his next project which is a refutation of the “chief standard objections to Marxism”. (292)

Terry Eagleton has been praised for his wit, humour, theoretical sophistication and ability to popularize difficult literary theories. He has also been criticized for his Marxist positions and his provocative idea of the author as a producer. Many critics, however, commend him for his passionate writing and style. He still remains the most prominent Marxist critic who declared war on traditional literary theory and the role of the traditional critic; and he continues to influence and inspire academics and students alike.