Marx & Philosophy Review of BooksReviews‘Marx at the Margins: On Nationalism, Ethnicity and Non-Western Societies’ reviewed by Barry Healy 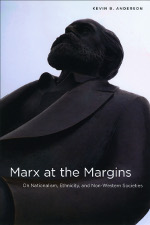 Kevin Anderson
Marx at the Margins: On Nationalism, Ethnicity and Non-Western Societies

Rudyard Kipling’s 1899 poem `The White Man’s Burden’ staunchly articulated the Victorian self-image of the civilizing mission of Empire. The nation’s sons would go to far-flung shores to “serve your captives’ need”. Not that the “sullen peoples” on the receiving end might appreciate it, given that were “half-devil and half-child”. This patronising Eurocentrisim was not restricted to the upper classes, it struck root deep in the British general national consciousness. But did this perspective of the civilising mission of capitalism also find a reflection, albeit tinged with criticism, in Karl Marx’s world view?

Edward Said, in Orientalism, thought that Marx was at least guilty of “the Romantic Orientalist vision”. Said pointed to passages in The Communist Manifesto that spoke in praise of bourgeois economic prowess that “batters down all Chinese walls … [forcing] the barbarians’ intensely obstinate hatred of foreigners to capitulate. It compels all nations, on pain of extinction, to adopt the bourgeois mode of production; it compels them to introduce what it calls civilisation into their midst, i.e., to become bourgeois themselves.” Said also found Marx’s 1853 article “The British Rule in India” an example of Marx’s propensity “in article after article” to return “with increasing conviction to the idea that even in destroying Asia, Britain was making possible there a real social revolution”.

These are sharp words about the founder of the modern revolutionary socialist movement. Are they accurate? Or, at the very least, was Marx “problematically unilinear”, as Kevin Anderson puts it? Did Marx assume that the history of every country was destined to be force-marched in one direction only, through the flames of capitalist development into the socialist future?

Further, in 1847 Marx thought that Poland must be liberated “in England not in Poland” and he considered Ireland’s liberation to be equally reliant on English workers. Did Marx’s “unilinear” thinking lead him to believe supposedly peripheral societies to be dependent on revolutionary action of workers in the metropolitan centres?

Reading such a catalogue it seems that Marx was guilty of a superiority towards Indians, Irish, black slaves, the Polish and the Chinese and other non-European civilisations. It could be argued that he mechanically forced all matters of race, ethnicity and nationalism into a one-size-fits-all class-based theory of history.

Kevin Anderson defends Marx’s thinking by delving deep into both the published and unpublished archives to bring to light hitherto little-known or unknown texts that show that Marx’s ideas evolved markedly over time. He argues that both the Communist Manifesto and “The British Rule in India” should not be taken as Marx’s last words on the subject of colonial development. Anderson’s survey of a large swathe of Marx’s writings illustrates the evolution of Marx’s thinking and the breadth of vision. This is a major work which will influence debate and thinking for a long time to come.

Drawing on his access to the Marx and Engels Collected Works (know by the German acronym MEGA) Anderson analyses a wealth of Marx’s unpublished notebooks on ethnographical readings and compares them with the evolution of his published works. For decades the MEGA was dominated by the Soviet Union, and significant writings by Marx were suppressed in true Stalinist style. Only now is a new generation of translators and editors, Anderson among them, bringing valuable texts to light (the new project is delineated as MEGA2 as opposed to the Stalinist MEGA1).

Anderson picks through the hundreds of pages of articles Marx wrote for the New York Tribune, the books published in his lifetime (a minor part of his output), comparing different editions with many fragments and unpublished manuscripts. Luckily, he is not just a diligent academic and translator, he writes in plain-enough English that the common reader can follow and be stimulated.

He details the Communist Manifesto’s “unilinear” concept of social progress and Marx’s 1853 New York Tribune article on India. In “The British Rule in India”, Marx certainly spoke of progressive features in British colonialism. India was caste-ridden, and the failure of the villages to revolt against foreign invasions showed that India had “no history” – no independent force driving its society forward, Marx believed. Importantly, however, Marx described British colonialism as a form of “barbarism”, which was a reversal of the language of the Manifesto.

The way forward for India would come from a revolutionary movement of the British workers, Marx wrote, or through the Indians organising their own liberation movement (the first time that a major European thinker supported Indian independence, Anderson says). Within a few years, by 1856-57, Marx’s anti-colonialism became sharper when, again in the New York Tribune, he supported China against Britain in the Second Opium War and the Indian Sepoy Uprising. Far from passively waiting for liberation by European workers, “India is now our best ally”, he wrote.

The more he read about Indian history the more his thinking evolved. His developing thinking was reflected in the Grundrisse, which was not published until well into the 20th century. The line of historical development in the Grundrisse was very nuanced, detailing the distinctions and similarities between early Roman society and ancient India. He showed how Asian societies had followed their own developmental path, dissimilar to Europe. Whereas previously he had seen Indian villages as the basis of authoritarianism (oriental despotism), he now saw that they actually formed a spectrum from democratic to tyrannical.

For many years following, Marx turned his attention to writing Capital, but he also looked at the dialectics of class and race during the American Civil War. He critically supported Abraham Lincoln and the Union forces, arguing for a revolutionary war to free the slaves. He propounded that white racism had held back the labour movement as a whole and he believed that slaves and freed slaves should be mobilised in the battle for their freedom.

The 1863 Polish uprising also attracted Marx’s attention. Poland and Russia had long occupied Marx’s thinking. Russia was the bulwark of reaction in Europe, the very heartland of despotism, the deadly enemy of the European revolution. Polish national liberation would not come as a consequence of proletarian revolution but was a necessary precondition for it, Marx came to believe. Unless democratic and class struggles could be linked with those of oppressed nationalities, Marx saw, all would be unsuccessful.

The working-class support that rallied to both the Union cause and the 1863 uprising were the twin bases for the foundation of the First International, of which Marx was a leading figure. “In this way”, Anderson writes, “Marx’s most sustained involvement with labour during his lifetime occurred under the backdrop of struggles against slavery, racism and national oppression.”

Shortly after its foundation the International became embroiled in agitation in support of the insurgent Irish. It was through this work that Marx came to re-analyse his ideas about the liberation of Ireland, which he originally thought could only become independent through a workers’ revolution in Britain. In 1869 correspondence with Engels, however, he said that he had changed his mind: anti-Irish prejudice had so corrupted the English workers’ movement that “the lever must be applied in Ireland”.

Almost all of these thoughts found their way into Capital as sub-themes. Anderson pays particular attention to the last edition prepared under Marx’s personal direction, the French translation of 1875, which he completely revised from previous translations. “In direct and clear language Marx now stated that the transition outlined in the part on primitive accumulation applied only to Western Europe,” Anderson says. As Anderson argues, this completely undermines any “unilinear” interpretation of Marx’s thought.

Between 1879 and 1882 Marx kept a journal of readings he was doing on the histories of a wide range of societies: Indonesia, India, Russia, Algeria, Australia, Latin America, and Henry Morgan’s anthropological studies on the North American Iroquois peoples. The notes on Morgan were found by Engels after Marx’s death and formed the background to Engels’ The Origin of the Family, Private Property and the State. These anthropological notebooks show that Marx became very aware of the dynamics of these societies. He appreciated the manner in which their communal forms had resisted imperialism and any hint of respect for a civilising role of colonialism was replaced by an implacable condemnation.

All of this theorisation culminated in Marx’s 1877-82 writings on Russia, in which he emphatically denied that the argument of Capital could be taken as a prediction of Russia’s future. In fact, he said that if Russia could avoid absorption into capitalism then the Russian village could prove a locus for evolution into socialism. He was not arguing for autarky; he believed that such a Russian socialist state would have to link with revolutionary workers in the West for survival and development.

Anderson argues that Marx was aware of “the intersectionality of class with ethnicity, race and nationalism”. But he was not a “philosopher of difference in the postmodernist sense, for the critique of a single overarching entity, capital, was at the centre of his entire intellectual enterprise”. Anderson’s assemblage of long-lost documents shows that Marx was far from a “Romantic Orientalist”. He was a consistent revolutionary, a proponent of human liberation, who was prepared to put his own ideas into the mortar and pestle and evolve new viewpoints as his understanding of the world widened.

It is interesting to observe that Anderson is a disciple of Raya Dunayevskaya, famous as the founder of “Marxist Humanism”. Her studies of Marx’s 1844 writings led her to argue that his earlier humanism had been lost to history – a distinction between the young and the older Marx, if you like. Anderson could be seen as arguing essentially in the opposite direction: the older Marx, with his more rounded outlook was responding to all signs of the human desire for liberation and seeking to foster all aspects of the struggle.