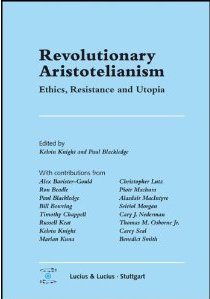 Jeffery Nicholas is the author of Reason, Tradition, and the Good (UNDP 2012), executive secretary …

This collection gathers revised papers from the Revolutionary Aristotelianism conference held in 2007 at London Metropolitan University. The conference focused on the work of Alasdair MacIntyre, whose engagement with those papers closes the book. The essays of Revolutionary Aristotelian address themes including, MacIntyre’s Aristotelianism (three essays) and Thomism (three essays), Metaethics (four essays) and the Critique of Liberalism and Capitalism (four essays). Overall, they point to the need for discussion that links together MacIntyre’s early Marxism and his continuing development of an Aristotelian-Thomism that takes Marx seriously.

The essays dealing with MacIntyre’s Aristotelianism and Thomism provide historical background for understanding his work, fill in gaps which support the history MacIntyre relies on in After Virtue and Whose Justice? Which Rationality?, and extend his theses. Carey Seal’s article expands on MacIntyre’s reading of Athenian history by bringing in a discussion of Hesiod. Where Homer’s Iliad and Odyssey find arête in the warrior, Hesiod locates virtue in a particular art. This disjunction highlights the disagreement within the tradition over the virtues as it develops in Athens and, further, gives rise to the tradition of excellence in practice that characterizes classical Athens. Politics comprises the arena in which conflicts over excellence are worked out among citizens: ‘The polis contains and regulates the plural virtues and, by giving hierarchical order to their practice, defines a moral order that is coherent but not monolithic’ (14).

The notion of tradition proves important for Kelvin Knight, as well, who examines the reception of that notion in Heidegger and Arendt. Heidegger, focusing on Nichomachean Ethics Book Six, claims that philosophy must overcome tradition. Arendt picks up here, rejecting Aristotle’s teleology as she emphasizes ‘action for its own sake and speech for the sake of persuasion’ (38). Both Heidegger and Arendt claim that tradition takes away from action. MacIntyre, however, revitalizes the concept of tradition first through his concept of practices – which have their own rules and standards – and the distinction between internal goods and external goods. MacIntyre’s understanding of tradition, practices, and goods allows him to further Marx’s position. MacIntyre claims that Marx’s third thesis on Feuerbach pointed the way to a revitalization of the Aristotelian notion of practice but never carried through on the promise. MacIntyre’s mature theory of practice and tradition, then, continues the tradition of Aristotelianism in a way that avoids the formalism of Heidegger’s Dasein and Arendt’s ‘action.’

Cary Nederman and Christopher Lutz support MacIntyre’s theses by examining the notion of labour and the development of voluntarism respectively. Most theorists, including MacIntyre, understand Aristotle to exclude common labourers from politics. MacIntyre believes this move inconsistent in Aristotle, and his continuing understanding of practice highlights how virtues arise in work and emphasizes the telos of political participation in human life. Nederman supports this reading by highlighting inconsistencies both in Aristotle’s text concerning labour and also in Medieval interpretations of Aristotle. For example, Hugh of St. Victor ‘refutes the accusation that mechanics live contrary to nature’ (27), and John of Salisbury held that mechanics should be granted an official status in the political body. Just as the history of concepts proves important for understanding Aristotle, the lack of that understanding, according to MacIntyre, corrupts moral concepts. For example, our understanding of human action changes with the development of voluntarism and nominalism after Ockham. Thus, Lutz points out that because voluntarists rid action of any telos and nominalism rids human beings of any telos, moral action reduces to a simple act of the will or, worse, of feeling, making it non-sensical. We are left, as MacIntyre concludes, with emotivism unless we revitalize Aristotelianism.

Of the essays addressing metaethics, Piotr Machura’s account of the role of philosophy in everyday life and Seiriol Morgan’s discussion of the modern self bring into question the role of the philosopher. Machura’s discussion hinges on MacIntyre’s distinction between the person as she is and the person she could be if she realized her nature. To make this transition, a person needs the virtues and standards of excellence provided by ethics. Characters are role models who embody those standards of excellence. They bring to the fore the importance of authority in interpreting the narrative, not only of our culture, but also of our lives and also show us the need of dialectical inquiry in those interpretations. ‘Thus, the character is unique in its openness’ (Machura’s emphasis, 125). In modernity, however, the individual must choose between liberalism and emotivism, which necessitates an unencumbered view of the self, and the ‘unconsciousness of the Volk’ which removes autonomy by hindering the development of moral reasoning (128). Machura’s reading of MacIntyre’s metaphysical biology and its emphasis on phronesis entails that philosophy must become a way of life for people and the philosopher a particular character.

Where Machura looks to the philosopher as a cure to emotivism in modernity, Morgan denies that we are emotivist. He claims, instead, that MacIntyre’s history is over-intellectualist. First, MacIntyre mistakes the development of the notion of the self in modern philosophy for the actual development of selves in that period. Second, MacIntyre ‘overstates the power of philosophy’ in shaping culture. Lost in his intellectualism, MacIntyre questions the value modernity places on the individual. In contrast, Morgan holds that a modern tradition supporting modern values – including the value of individualism – could sustain a substantial notion of the self. A person can be a modernist individual self, rejecting Burkean ‘tradition,’ without rejecting tradition per se and, thus, escape the emotivism that MacIntyre thinks plagues modernity.

The most challenging essay in the collection is Timothy Chappell’s ‘Utopias and the Art of the Possible,’ which opens the section on Liberalism and Capitalism. Chappell takes aim at MacIntyre’s defense of a political community that has a shared ethos within which rational political debate can occur. Chappell contends, instead, that we should not want agreement in the way MacIntyre argues. We, instead, should see moral diversity as a positive sign of humanity. He agrees with MacIntyre that modern political societies should limit the power of bureaucracies, but he does so because ‘The first axiom of political philosophy is therefore: individuals first’ (187). Bureaucracy should aim at providing for the individual. Only through liberal democratic principles can we, according to Chappell, protect ourselves against bureaucracies that overstep their roles. Thus, rather than defend small communities with shared ethics the way MacIntyre does, Chappell defends Millian forms of liberal democracy.

If Chappell takes MacIntyre to task for his rejection of liberalism, Paul Blackledge challenges MacIntyre’s rejection of Marxism. In his youth, MacIntyre belonged to the Marxist Left, but abandoned that position because the later Marx embraced a mechanical materialism that sent Marxism down the wrong road. Blackledge provides a detailed reading of the development of Marxism through Lukács and Grossman. Of central issue is what role the working class had in developing a critical consciousness and leading the revolution. Blackledge defends a reading that shows Lenin to have believed that the revolution must come from the working class: ‘an optimism about the possibility of the growth of socialist consciousness’ (217). Lenin, thus, breaks from Second International dualism. From this evolved a Marxist ethics best stated in Trotsky’s Their Morals and Ours. Rejecting dualism, Trotsky believed that the ends justify the means but that the ends must also be justified. It also resists an interpretation that distinguishes between the working class and leaders who use the working class.

I have, of course, not covered all the articles in the text, key among these Ron Beadle’s argument that management is not a practice and Russell Keat’s defense of perfectionist versions of liberalism. The essays in this volume prove remarkable both when they support MacIntyre’s research through their own readings of history and when they challenge MacIntyre’s work. Of these, Chappell’s and Blackledge’s prove the most worthwhile, Chappell’s because of how clearly he lays out the challenge to MacIntyre and Blackledge’s for its detailed and informative reading of the development of Marxism. In response to Chappell, MacIntyre highlights how he is well aware of disagreement in classical Athens on important issues and, more to the point, the lack of possibility of rational debate in modern society. Overall, MacIntyre’s own contribution proves substantial because it engages the criticism of the various authors by elucidating his own thought or, in response to Blackledge, pointing in directions that it could be developed. What I have shown, however, is that the essays in this volume cover a range of topics important for the continuing development of MacIntyre’s merging of Marxism and Aristotelian-Thomism. They should prove of interest to anyone working in moral and political theory today and, more importantly, anyone working at seeking a way forward out of the irrationality that often characterizes modern social life.

(In honor of full disclosure, I should note that the International Society of MacIntyrean Philosophy (www.macintyreanenquiry.org) of which I am executive secretary, arose from the conference that gave rise to these papers.)