Marx & Philosophy Review of BooksReviews‘Communitas: The Origin and Destiny of Community’, ‘Bíos: Biopolitics and Philosophy’ reviewed by Benoît Dillet 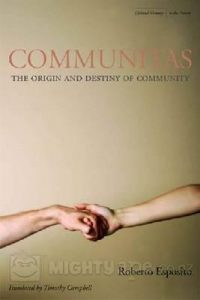 Roberto Esposito
Communitas: The Origin and Destiny of Community 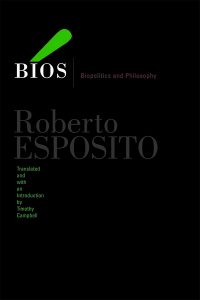 Roberto Esposito is a philologist of a new kind: a philologist of the political. He introduced his project in his quasi-manifesto Categorie dell’impolitico [Categories of the Impolitical] (1988), as a direct opposition to all forms of modern depoliticisation. For him, the impolitical is not the opposite of the political (the non-political or the apolitical), but `the forgotten’ or `the unthought’ of the political. The impolitical is the doubling of the political, the political as seen from its exterior border (Esposito 2005, 18). Author of twenty books, his main concepts – community, immunity and (affirmative) biopolitics – result from a careful reading of some of the main continental political philosophers. In his hermeneutical work of explaining the philosophers’ life works, he neatly unravels thread by thread the complexity of their philosophical system. Then, he uses his impolitical reading to reconstruct the couple community/ immunity.

Communitas is an answer to the communitarian debate (Sandel, Taylor, MacIntyre, Kymlicka) that was especially active in the 1990s in the United States in social and political philosophy. Communitarianism tried to give an answer to the failure of communism and an alternative to the overarching neoliberal conception of subjectivity as individualism (or `atomism’). Esposito believes that the communitarians’ conception of `community‘ did not manage to leave the liberal framework of the metaphysical subject, but on the contrary `political philosophy tends to think community as a “wider subjectivity’’’ (2).

His ardent critique of the communitarians is founded on the fact that they failed to see beyond their own borders – `community’ had a long tradition that the French philosopher Jean-Luc Nancy crystallised during his involvement with the Centre for the Philosophical Research on the Political in an essay on Bataille, titled `The Inoperative Community’ (1983), to which Blanchot responded the same year in The Unavowable Community. In fact, Esposito develops at length some of Nancy’s passing references (Rousseau, Arendt, Hegel, Hölderlin).

Each chapter in Communitas focuses primarily on one philosopher: Hobbes, Rousseau, Kant, Heidegger and Bataille respectively. I will briefly summarise them in order to clarify the main claims of the book that the community (`communitas’) is both `necessary and impossible’ (53, 82). The density of Esposito’s argument makes for challenging reading, but at the same time, an excessive simplification would take away from its intellectual richness and rigour.

1. Esposito starts with Hobbes since he believes that Hobbes determined the modern political categories by totalising them, and community is no exception. Hobbes recognises that what makes individuals equal is their fear of death, and of being killed by the other. The only gift in Hobbes’ communitas is `the capacity to kill and, correspondingly, the possibility of being killed … generalized to such a degree as to become the sole link that joins individuals who would otherwise be divided and independent’ (26). Hence `the state’s task is not to eliminate fear but to render it “certain’’’ (25). Fear is a technology of power, `it doesn’t reside on the side of the irrational but on the side of the rational. It is a productive power [potenza]’ (23). For Esposito, Hobbes’ community is in fact an immunitas, a community where all the individuals are immunised one from the other. Esposito forgets in his reading of Hobbes the right to resistance and disobedience present when the state does not protect the people. Hence we would like to ask whether this right to disobedience is also part of the paradigm of immunisation that Esposito assigns to Hobbes?

2. Rousseau’s communitas is the community of `guilt’. Rousseau’s philosophy influenced both the contemporary communitarians with his myth of the first community, and also Kant with the idea that community is impossible. The first group is influenced by his political writings (mainly the Discourses and the Social Contract), whereas Kant found a philosophy of existence rising from Rousseau’s autobiographical and narrative texts (55). The antinomy of these two philosophies should be kept alive, Esposito warns us (51); on the one hand, the myth of the community and on the other, the literary community of writing in solitude. Esposito goes so far as to conclude that `the underlying motive of a like convergence with the Hobbesian model (and despite all of Rousseau’s best efforts at contesting it) isn’t of the political but of the philosophical sort’ (51).

3. According to Esposito, Kant draws his conception of community from Rousseau’s who concedes a community of existence. For Kant, thinking is a communitarian activity, and Esposito is much less interested in his perpetual peace and cosmopolitan thought, than his conception of the law and `the categorical imperative’ (63). The categorical imperative is nothing but an obligation to obey (74). The transcendental nature of the law provides Esposito, and political philosophy in general, with the new framework under which the community is outside the subject: `community coincides with the nonsubjective character of the law’ (74).

5. It is with Heidegger and Bataille, or rather in-between the two, in the perceptive dialogue that Esposito constructs, that the ontological and philosophical resources are found to ground this new thought of the community. `The community isn’t before or after society’ (92), neither nostalgic, nor utopian in a future to come. Esposito’s argument is that Heidegger lacked the concept of experience that Bataille originally conceptualises. Without going into detail, taking the openness of the Heideggerian Mitsein, the Bataillian community of experience is revealed by `the breakdown of individual borders and the mutual infection of wounds’ (124). This is why Bataille is `the most radical anti-Hobbesian’ (124): whereas Hobbes is responsible for the destruction of the community – `nihilism’ (140) – through his institution of the paradigm of immunisation, Bataille breaks these individual borders. The discussion of Heidegger’s and Bataille’s anti-humanism is particularly sharp and insightful (133).

From Communitas to Bíos, much progress is made, the concepts of community and immunity dance on the new platform that the theme of biopolitics has laid down. Our modernity is biopolitical; the examples in the introduction of Bíos intend to demonstrate how much the contemporary events bear the mark of the biopolitical. In this sense, Esposito is not too far removed from his Italian comrades, Lazzarato, Negri and Agamben, who decided to pursue in their own way the historical apparatus constructed by Foucault, as the instructive introduction by Campbell tells us.

Bíos starts where Communitas (and possibly the untranslated Immunitas) finishes, on the closure and the openness of the border of the body (between community and the individual). With biopolitics we move from the long-standing biological metaphors in political philosophy (state as body) to Nazi politics `us[ing] biological processes as criteria with which to guide their own action’ (112). In fact, Esposito informs us that the immunisation paradigm that we saw emerging in Communitas with Hobbes is reinforced with modern biopolitics. Hence, the project of the author of Bíos is to find a new language to speak of politics, to ground an alternative to `nihilism [that] conceptually appears to be insurmountable’ (95). The metaphors of the body in the language of the political seems to be prescriptive of certain concrete biopolitical politics referred to the introduction (mostly terrorist attacks and states of emergency), `each time the body is thought in political terms, or politics in terms of the body, an immunitary short-circuit is always produced, one destined to close “the political body’’ on itself and within itself in opposition to its own outside’ (158).

Bíos constantly refers back to the dualism community/ immunity that was already conceptualised in Communitas and we imagine in Immunitas (2002). Esposito in fact compares his paradigm of immunisation to Foucault’s notion of biopolitics.

Esposito starts the book with a genealogical work on the concept of biopolitics from its early (and often forgotten) use in the 1920s and 1930s, arriving at the intensity Michel Foucault has given to the biopolitical vocabulary as a new grammar of politics. Then, Esposito invites biopolitics into his own philosophical terrain: community and immunity. Hence the question that haunts the book: how is biopolitics different from his concept of immunity?

Biopolitics is the new political economy, or rather as Foucault examined in his Collège de France lectures, neoliberalism celebrating a new form of depoliticisation by managing population and bodies to regulate life. Foucault famously said that the classical sovereignty (`to take life or let live’) had been replaced or rather completed by a biopolitical sovereignty (`to make live and to let die’) (Foucault 2003, 241).

The main issue in both Communitas and Bíos is the community and the affirmative biopolitics that reopens the closure of the political. A community is not a wider subjectivity immunised from the outside (through exclusion), but it is the outside, indeed there is no outside to the community because the outside is inside, as a debt. And this is where Esposito owes so much to Bataille, the limit to utility, the debt of the community is not in return for something else (as an exchange), but more to do with human nature without bounds…

Finally, Esposito’s original contribution to the literature on community is truly contemporary if we were to refer to last year’s debate on `The Idea of Communism’ (March 2009 at Birkbeck College, London) led by Slavoj Zizek and Alain Badiou: community and communism become a Kantian Idea rather than a reality.