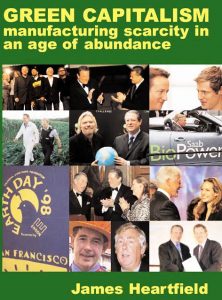 Why are there so few Marxian engagements with environmentalism? The paucity of analysis is surprising given the contemporary prominence of environmental concerns within anti-capitalist discourse. John Bellamy Foster is one of the few thinkers to have devoted a concerted effort to excavating Marx’s discussion of the ‘metabolic rift’ of Capital’s relation to nature in light of these concerns. More critical – as in negative – takes on the subject seem to be markedly thin on the ground and treated as something of a taboo within leftwing circles.

James Heartfield’s Green Capitalism is an exception that proves the rule. It is exceptional insofar as it presents a Marxian, materialist critique of contemporary ‘green capitalism’, emphasising class, labour composition, and the declining rate of profit. It affirms the rule, however, from the first glance: the book’s cover evidences no design investment; the layout betrays a lack of professional setting; and the patchy referencing could not have made it past any diligent sub-editor. In addition, it transpires that this is a print on demand publication, confirming the impression that one has in one’s hands a fringe artefact, or, worse, a vanity print.

These initial impressions are unfortunate and should not prejudice a genuinely open-minded scholar or activist interested in the topic. The book is original – possibly unique – in its aim to go beyond criticism of corporate ‘greenwashing’ to attempt to deliver a knock out blow to environmentalism as both an ideology and form of political economy within advanced Western capitalism.

Heartfield’s central contention rests on a double character he attributes to the capitalist class since the industrial revolution: they have become rich off the back of factory production, whilst at the same time wishing to get out of production altogether by retiring to the certainties of rent-seeking; that is, to non-productive activity. He associates the rise of financialisation with this tendency, and argues that environmentalism is the ideology legitimating the current retreat from production. To add weight to this thesis, the book presents a fine compendium of exhibits of how big business and cultural ‘elites’ have made easy money out of environmental schemes, and how there is no necessary contradiction between the move of the capitalist class from production to legally enforced conditions of manufactured scarcity – such as the trade in carbon credits – which can be used to extract steady streams of rent.

Unfortunately, there are a number of ambiguities and contradictions within the text which undermine its polemical intentions. Whilst Heartfield is skilled at exposing the cultural prejudices and hypocrisies of mainstream environmental advocates, too little theoretical attention is given to justifying his own argument. For one thing, if capitalists have always wished to get out of production into the easy money of rent seeking activity, why has this only recently, in the last thirty or so years, become an overwhelming tendency to the point where it is determining prevailing ideological norms? On this point, the chapter on green imperialism could have been supplemented with an analysis of the change in the international division of labour to unpack what gives traction to the shift today, when previously it has stalled.

His example of Enron exhibits similar contradictions. Heartfield persuasively demonstrates why this emblem of financial folly was also at the forefront of the corporate pro-environmental lobby: Enron cut its carbon footprint precisely by expanding into the ephemeral financialisation of energy provision. As is well known, however, the end result of this strategy was the spectacular implosion of the company: a glaring omission from the discussion of the company’s fortunes in the book. Thus, when Heartfield mocks Charles Leadbeater’s now dated contention that the new economy can live off ‘thin air’, his critique remains ambiguous as to whether, to use an environmental term, these kinds of non-productive approaches are themselves sustainable. If not, then the critique of corporate greening as a deleterious trajectory of contemporary capitalism would hold no more weight than the celebratory accounts of the digital economy from the late 1990s.

This question has profound consequences for Heartfield’s argument, for it is intrinsic to the matter of whether companies are merely greenwashing themselves as part of a public relations exercise, or are more fundamentally re-engineering both themselves and the law as part of a shift away from productive activity towards rent-seeking. On this point the example of BP is also far from convincing. Although it is true that they rebranded themselves for a time as ‘Beyond Petroleum’, the fact that in 2006 BP made £17.9 million from carbon trading titles does not imply that they need not ‘bother refining petroleum when the EU will give [them] millions in carbon trading titles.’ (35) As BP’s recent deep-water drilling accident payouts of $20 billion show, revenue from carbon trading is not even pocket money for the oil business. The example seems to lend more weight to the environmentalist greenwashing critique than Heartfield’s own.

Throughout Green Capitalism one keeps expecting to reach the passage where – considering its pivotal role in the argument – productive activity is finally defined. Despite passing criticism of the extension of copyright law vis-à-vis intellectual production, it is hard not to suspect that Heartfield harbours a bias towards the production of physically embodied use values: houses, cars, roads, etc. And whilst in itself this might not be too problematic – after all, no matter how cool video downloads might be they are hardly intrinsic to improving living standards and the elimination of scarcity – since he claims that we already live in an ‘age of abundance’ then a definition of what constitutes non essential production is in order. This is particularly the case when questions of intellectual production and reproduction bleed into the same debates regarding the financial market’s relation to the ‘real’ economy. There is a burgeoning Marxian literature on this subject, and even if it would be churlish to chide Heartfield for his lack of engagement with these sometimes esoteric debates, at the very least a level of recognition of the ambiguities is compelled by his thesis.

For the average reader there is probably a more serious omission, though, that is likely to be the one that dents the possibility of this book ever having the level of impact upon the debate it aspires to: the absence of discussion of climate science. Heartfield’s critique is almost solely concerned with debunking the impression that there is a radical anti-capitalist impulse underwriting the contemporary environmental movement. But in so doing he misses the point that environmentalism is itself split into self-consciously pro capitalist and anti capitalist factions: those ‘realists’ who have resigned themselves to free market mechanisms to address the issue, and those ‘idealists’ who see environmental destruction as necessitating a new social order. For both camps, however, climate science provides the ultimate impetus for change, more so than any antagonistic ideological impulse. Accusing environmentalism of merely peddling middle class prejudices works as a critique only insofar as one presumes, a priori, a primarily ideological determination of the ‘movement’. By failing to address the ‘real’ – scientific – consensus on the matter (which could have been possible from his perspective via the analysis of someone like, say, Bjørn Lomborg), it ends up looking as if Heartfield’s own critique is more ideologically determined that that of his adversaries.

This is a real shame. Personally, I think Heartfield has hit on something important in this book. Yet the argument is inadequately developed considering the enormity of its claims. In the second to last chapter, for instance, John Bellamy Foster’s environmentalist, Marxian hermeneutics are summarily dismissed without even a quote, or any adequate paraphrasing of his argument. As a result, it is Heartfield’s quotes from Marx and Trotsky to support a productivist Marxian reading which ends up coming across as dogmatic. The book begs for a more rigorous, systematic treatment of its thesis than this. Until that project is undertaken, Green Capitalism is unlikely to have much substantial impact on the debate surrounding environmentalism within Marxian circles or amongst the public in general.