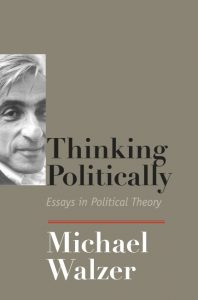 Over a long and prolific career Michael Walzer has written extensively on a number of issues in contemporary political theory and moral philosophy: the nature of political obligation, the morality of war and terror, the spheres of social justice, the merits and shortcomings of liberalism, the difficult relationship between national identity and multiculturalism, and many more besides. This new collection, edited and introduced by David Miller, brings together 17 of Walzer’s most important essays from 1973 to the present day.

The essays are grouped together thematically: the first section deals with Walzer’s understanding of the relationship between philosophical speculation and political practice; the second with his account of the achievements and limitations of liberalism; the third with his argument for the requirements of distributive justice; and finally, the fourth which focuses (more globally) on the legitimacy of humanitarian intervention, the scope of human rights and the morality of war and terror.

Walzer begins in chapter 1 by considering a type of philosophical project, one where the philosopher purposefully retreats from their ‘community of ideas’ in the hope that in doing so they will be able to discover the principles that should govern their political community. This philosopher, Walzer says, feels the need to ‘look at the world from a distance, freshly, like a total stranger’, for only then can they escape the captivity of their particular historical situation. Whilst commending this philosophical project for its ‘heroism’, Walzer argues that it is ultimately condemned to repeated failure, for on their return the philosopher discovers that their universal principles are at odds with the particular practices, traditions and conventions of their political community.

Chapter 2 continues in much the same way, as Walzer now takes aim at a type of philosophical methodology, namely, the philosophical conversation which has its historic roots in Platonic dialogue and finds its modern expression in the contractualism of Rawls, Habermas and Ackerman. This tradition is characterized by an attempt to derive political principles from what people would rationally agree to when placed under certain abstract and idealized conditions (most famously in Rawls’ Theory of Justice persons decide on the principles of justice in an ‘original position’ behind a ‘veil of ignorance’, where each individual is denied access to information about their assets, abilities, and preferences).

Walzer is highly critical of this tradition. First, he considers it to be too far removed from the exigencies of real political life – the ‘pressure of time’, the ‘structure of authority’, the norms of ‘institutional life’, and so on – to be able to speak effectively to real-life political practice. And second, Walzer argues that it is only by limiting the epistemological reach of citizens – by denying them access to knowledge about their assets, abilities and preferences – that consensus is reached (note, however, that the contractualist could argue that this is precisely the point of the hypothetical contract: to abstract from all factors irrelevant to justice – like the pressure of time or the unequal bargaining power of persons – so that we can see, more clearly, what it requires).

This understanding of the role of the political philosopher informs Walzer’s response to a number of different issues in political philosophy; including the problem of distributive justice where his approach is not to make ‘universal pronouncements’ but rather to critically reflect on the what justice requires in the ‘here and now’, that is, in a context marked by pluralism and inequality. In these chapters, Walzer gives a skeletal account of what justice minimally requires in modern (American) society: first, a ‘shared, economic, social, and cultural infrastructure’ that enables all citizens to participate fully in necessary or valued activities; second, a ‘a system of communal provisions’ (essentially an extensive welfare state, though one that is sensitive to local variations and voluntary organization); third, equality of opportunity (albeit one that denies access to ‘illegitimate’ opportunities – ownership of the major means of production would be forcibly discouraged); and fourth, a strong democracy (including a commitment to democratize the economic sphere through a mixed system of public ownership and industrial democracy).

Now, turning to liberalism, Walzer argues that the historic achievement of liberalism lies not, as is most commonly argued, in its granting of individual rights and liberties, but rather in the practice of ‘separation’ where each sphere of civil society – church, university, market, family, and so on – is marked off, protected from external interference and granted freedom in directing its own affairs. When this act of separation is successful associations serve as a focus for communication and sociability; as an arena for direct democratic participation, providing an important corrective to the remoteness of national political engagement; and as an agent for social justice, as goods are distributed according to the norms governing each sphere. As Walzer says: ‘different goods are distributed according to different principles to different people’.

The last of these arguments is problematic. As Miller notes in the introduction, associations are invariably ‘imperfect’ agents of social justice: they may distribute goods fairly amongst their own members but fail to counteract inequality across society; or, worse still, they may just distribute goods unfairly, denying some of their members an adequate share of resources (as feminists have argued is often the case with the family). This presents a serious problem for Walzer. His answer, gestured at in Spheres of Justice but made more forcefully here, is that the state must occasionally step in to regulate associations – and their distributive principles – in order to guard against inequality and domination. But how often would the state need to do this? And what would be the resulting effect on associational life? These questions point towards a central tension running through Walzer’s thought – how to reconcile a powerful argument for associational autonomy with a robust defense of equality and social justice – that remains largely unresolved.

Along with Michael Sandel, Charles Taylor and Alasdair MacIntyre, Walzer is often referred to as a communitarian – a characterization that he himself resists. In chapter 7, Walzer gives his own reading of the liberal/communitarian debate. Against the Kantian liberal, who has celebrated the autonomy of the modern ‘unencumbered self’, and against communitarians like MacIntyre, who has lamented the breakdown and fragmentation of traditional forms of community, Walzer argues that the modern self remains deeply embedded in communities with shared understandings, beliefs and values. ‘The structure even of liberal society, Walzer writes, ‘is communitarian’.

Walzer, then, proffers a moderate form of communitarianism. On his view, it is not that community ceases to exist in modern liberal society; rather it is that we increasingly fail to recognize the extent of our communal attachments, leading to a (false?) sense of communal fragmentation and alienation. To overcome alienation we must recognize and appreciate the communal bonds that are in fact already in existence. This thesis, it is important to note, lessens the antagonism between the liberal and the communitarian: if all overcoming alienation requires is for us to recognize existing communal identities, then no fundamental change to modern society is required. The danger, of course, is that this threatens to undermine the communitarian critique of liberalism altogether.

The latter parts of the book focus extensively on what might be called global issues in political philosophy: the scope of human rights, the legitimacy of humanitarian intervention, the importance of collective self-determination, the morality of war and terror. Walzer’s response to these issues is marked by a number of common threads. First, he often argues for a separation in our thinking between the national and global spheres, asserting that moral principles, like those of distributive justice, cannot be simply extended to the global domain (this puts Walzer at odds with cosmopolitan accounts of global justice). Second, Walzer consistently emphasizes the value of collective self-determination: the right of communities to pursue their own goals free from external interference (this has led to the claim that Walzer’s view of international relations is fundamentally ‘statist’ in design. Walzer addresses, and rebuts, this claim in Chapter 13). Third, Walzer defends a fairly ‘thin’ set of basic human rights based on a minimal set of injunctions – against murder, rape and slave labour – that he argues are common to all cultures. Fourth, Walzer argues that humanitarian intervention, understood as the intervention into the territory of another state by military force, can only be justified in response to gross violations of these rights: mass murder, ethnic cleansing and the establishment of slave labour camps are cases for intervention; brutal authoritarian politics and oppressive social practices are not.

It will be apparent from the exegesis above that the seventeen essays collected together in Thinking Politically address a wide-range of topics and issues. All are certainly well worth reading. Walzer’s prose is lucid and engaging, and the questions he addresses are significant – both within the discipline of political/moral philosophy and to current political debate (e.g. chapters 4-8 on the need to recapture the density of associational life) And, for myself, I found Walzer’s treatment of these complex issues to be hugely insightful and illuminating. This is not to say, of course, that I was persuaded by all of the arguments presented here. In particular, I was disappointed that the central tension running through the book – between associational autonomy and distributive justice – was left so starkly unresolved, which raises the question of whether these two values are just fundamentally irreconcilable (at least in there Walzerian forms). At the very least, it seems to me, Walzer’s robust account of social justice would require far greater state regulation of associational life than he seems willing to allow.

As for the collection itself, and how well it brings the various aspects of Walzer’s thought together, my only criticisms would be two rather similar essays on humanitarian intervention are included (where I think one would have sufficed), and that the book does not include any of Walzer’s important work on political obligation (presumably because his engagement with this topic pre-dates the essays included here). But these are minor complaints. Overall, the collection does an excellent job in conveying the skill, breadth and vision of Walzer’s moral and political philosophy.