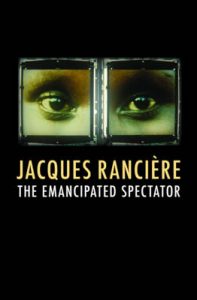 The Emancipated Spectator originated in former Althusserian French philosopher Rancière’s reflections upon the role of the spectator in contemporary art at the fifth Summer Academy of Arts held in Frankfurt in 2004. His reconsideration of this topic afforded him the opportunity to challenge some of the theoretical and political presuppositions that inform the criticism of the practices and strategies of contemporary political art. Rancière discusses critically Marxist and postmodern social and cultural critiques. He is familiar with and sensitive to modernist, avant-garde and contemporary art, theatrical performance, photography and cinema while seeking to displace the oppositions that structure the debates that surround them: activity and passivity; individuality and community; ignorance and knowledge.

The spectator emerges as a paradoxical figure in critical thought. Although the spectator is condemned as the ignorant and merely passive voyeur of seductive images there is no art or theatre without her. The passive spectator who takes pleasure in images while ignoring their production and the reality they conceal is taken to represent the betrayal of art’s political efficacy and to display her own alienation and ‘self-dispossession’. The inactive spectator is supposed to vanish with the abolition of art and theatre as spectacle and the restoration of its essence as a ‘living community’ (6). However, in Rancière’s defence of the status of the spectator, the oppositions and equivalences that structure the critique of the spectator and of theatre are in reality relations of inequality, domination and subjection. Rancière makes the point that theorists can suppose that what the spectator feels or understands will be what was intended for her by the artist. The emancipation of the spectator might begin with the realisation that viewing actively transforms and interprets its objects; what she sees, feels and understands from the performance is not necessarily what the artist thinks she must (14). He rejects this ‘logic of straight, uniform transmission’ from one mind to another to insist upon the creativity of the spectator. Drawing on ideas developed in his earlier The Ignorant Schoolmaster: Five Lessons in Intellectual Emancipation (1991), Rancière identifies what he means by an ‘emancipatory practice’ of art. The artist should be more like ‘the ignorant schoolmaster’ who ‘does not teach his pupils his knowledge, but orders them to venture into the forest of things and signs, to say what they have seen and what they think of what they have seen, to verify it and have it verified’ (11). The emancipated spectator, like these pupils, possesses the capacity to translate and interpret, to make new associations and disassociations from the spectacle she views (17). Thus, for Rancière, emancipation does not arise from the critique of consumer society, an approach which he suggests is paternalistic and elitist. Rather, it blurs the boundaries between looking and doing, the roles of specialist and amateur, student and teacher, and means for the proletarian, seizing hold of aesthetic experiences and the pleasure of spectating.

Rancière considers the aesthetic not as the utopian principle of articulating the sensuous with the conceptual – an idea derived from Schiller – but instead as a process of ‘dis-identification’. The aesthetic is political in that it allows individuals a divorce from their prescribed functions within the social relations of production: ‘an emancipated proletarian is a dis-identified worker’ (73). Rancière explores the emancipatory and political character of the aesthetic exemplified by a mid-nineteenth century diary of a joiner that describes his enjoying the view from the windows of the room upon which he is working. For Rancière this demonstrates a disconnection of the senses, an undoing of the correspondence between a now distracted gaze and the body of the skilled worker. This worker’s aesthetic experience disrupts the way his body is supposed to fit its function, purpose and social destination. If individuals possess the ‘the sensory and intellectual equipment’ appropriate to their duties and position within a division of labour, then their emancipation entails breaking the fit between their capacities and their occupation. The worker’s seizure or appropriation of a uniquely aesthetic experience separate from her labour represents the non- or dis-identification with her supposed and expected mode of being or condition. Thus Rancière recasts the critique of the passive and ignorant spectator: workers who become spectators disturb the given distribution of the sensible to which they are fitted.

What Rancière names as the ‘aesthetic break’ designates a break with ‘the regime of representation or the mimetic regime’ (60). Representation or mimesis means an inherent and unambiguous concordance between different kinds of sense. Critical thought has tended to connect the power to produce ethical or political effects with the character of the autonomous artwork itself. This idea of their connection has remained the model for political art, Rancière argues. The ‘aesthetic break’ is understood as a break with the regime of primarily mimetic representation upon which political art has depended, whether that means the reproduction of commodities or consumer spectacles or the photographic representation of atrocities. The `aesthetic’ names the break in this continuity between representations and their supposed social and political effects. In the immediacy of theatre and forms of relational visual art there is no separation between performing actors or artist and the audience. The French curator Nicolas Bourriaud is the leading theorist of relational aesthetics for whom visual art in the 1990s became a form of social exchange generated through the relations, encounters and interaction between people that artists would facilitate. But Rancière suggests that artists should investigate the power of the aesthetic itself – the rupturing of artistic cause and political effect – to produce political effects.

Rancière argues that political or critical art had traditionally taken for granted a straightforward relationship between political aims or effects and artistic means or causes with the ambition, which he considers sheer supposition, to raise an apparently passive spectator’s political awareness leading ultimately to her political mobilisation. Political art revealed that commodity and market relations lie behind beautiful appearances and are their truth. It aimed to disabuse the spectator and induce a sense of complicity, guilt and responsibility in her. As archetypal means of achieving those ends, Rancière cites Brecht’s theory and practice, the political montage of German Dada, and the American artist Martha Rosler’s series, Bringing the War Home: House Beautiful, 1969–1971 that juxtaposes photographs of luxurious petty-bourgeois interiors cut out from House Beautiful magazine with images of the Vietnam War from Life magazine. Rosler’s work, which continues a tradition of twentieth century committed art, reveals to the spectator a hidden reality of imperialist violence behind happy and prosperous domestic interiors.

However, Rancière is critical of Brechtian distanciation as a way of making political art. He doubts the pretentions to political efficacy of strategies intended to express repressed desire or render palpable class domination. He sees no reason why the ‘clash of heterogeneous elements’ and the sense of strangeness that photomontage evokes should either help the spectator understand the nature of domination or determine her political decision to change the world. He is critical of a political art and aesthetics that presuppose an uncomplicated transit between modes of artistic production (collage, photomontage) and the subjective determination to act politically. The Emancipated Spectator argues that the artistic procedures of the avant-gardes did not produce politicised and revolutionary ideologies and practices but were sustained by them. What was always the disguised weakness of the political efficacy of the procedures of twentieth century political art is exposed with the erosion of the ideologies and practices of revolutionary politics and workers’ movements. The critique of the spectacle, Rancière argues, was a response to this weakness and developed further the postmodern suspicion of and disappointment with the political capacity and efficacy of the image.

The ideological critique of the languages and images of consumer society of Roland Barthes’ early writings and the Situationist International’s theorisation of the social implications of the rise of consumerism undermined the strategy of juxtaposing reality and appearance in the work of artists like Rosler. Images merely expressed our alienation and supine passivity rather than acting as a catalyst for struggle. In opposition to the critique of the society of the spectacle and of myth, Rancière wants a new practice of political art that reworks ‘the frame of our perceptions and the dynamism of our affects’ and generates new forms of political subjectivity. He is critical of art that wants to emancipate its spectator because it presupposes ignorance and passivity. He defends an aesthetics in which the artist does not transmit superior knowledge to an ignorant and passive spectator. Rancière’s emancipated spectator actively interprets and translates the image offered to her. Rather than a transmission of knowledge, the image emerges as an alien entity that the artist and spectator verify together. In his discussion of the ‘intolerable image’ – images that cannot be viewed without anguish – articulated or deployed by committed artists like Rosler that presuppose an unbroken line between representation, knowledge, comprehension and political action, Rancière claims that the point is not to contrast reality with its images or appearances but to create works of ‘fiction’: ‘different realities, different forms of common sense … different spatiotemporal systems, different communities of words and things, forms and meanings’ (102). Political art, for Rancière, is not the practice of revealing the concealed reality of domination and exploitation behind the appearances and images of consumerism or demonstrating yet again the omnipotence of the commodity. The intolerable images of political art are displaced by fictions that disrupt or break the ideological framing and interpretations of the surfeit of images in capitalist societies that generate new possibilities of what can be seen, said and thought.

The politicized aesthetic that emerges from this book perhaps precludes a thorough and satisfying engagement with the actual practices of collaborative and relational art; the critique of the spectacle more or less exhausts the ambitions of political art for Rancière. The book’s remarks on the actual political efficacy of political art are significant. Its sustained defence of the spectator amounts to an important critical exploration of the intentions of contemporary artists and develops Marxist and postmodern cultural and critical theory that reminds its reader, in ways reminiscent of Barthesian theories of reading and textuality, of the political nature of spectating and aesthetic experience.