Roland Boer
Criticism of Heaven: On Marxism and Theology, Vol. 1 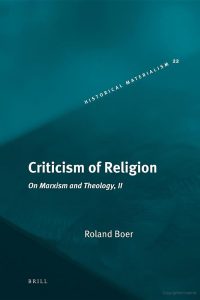 Roland Boer
Criticism of Religion: On Marxism and Theology, Vol. 2 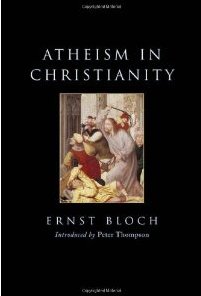 Ernst Bloch
Atheism in Christianity: The Religion of the Exodus and the Kingdom

These three books deal with the relationship between Marxism and Christianity. And the two authors might fairly be described as Marxists – albeit of a maverick kind.

Bloch first. His Atheism in Christianity was first published in 1968 (thus a late work) and an English translation (by J. T. Swann) came out in 1972. Swann omitted sentences, and even sections, from Bloch’s text and thus is, to a small extent, an abridged version. It is a pity, therefore, that this Verso edition simply reprints Swann, though with a useful and substantial introduction by Peter Thompson who is Director of the Centre for Ernst Bloch Studies at the University of Sheffield.

Bloch was an associate of such thinkers as Benjamin, Brecht, and Adorno and best known for his massive and sprawling The Principle of Hope. He is, as Adorno said, ‘the one mainly responsible for restoring honour to the word “utopia”’. Atheism in Christianity is a good introduction to this enterprise. It consists of 44 essays or reflections on the revolutionary potential of the Bible. The uniting theme is that there are two Bibles – one interpreted by institutional authority to ensure domination from above and the other voicing what Marx called ‘the sigh of the oppressed creature, the feeling of a heartless world, and the soul of soulless circumstances’. In this distinction, as Bloch puts it, between ‘a Scripture for the people and a Scripture against the people’, Bloch concentrates on the figures of Job and Jesus to produce a reading which is subversive and revolutionary where God is not the creator God of the past but the Jaweh whose name is ‘I will be what I will be’. Inevitably, Bloch’s approach is limited by the state of Biblical criticism in his time with its pre-occupation with Ur-texts, the ‘real’ Jesus etc. He can also be rather runic – for example, one of the epigraphs to the book reads: ‘only an atheist can be a good Christian; only a Christian can be a good atheist.’ But at least this provides a good antidote to the polemics of fundamentalist religion versus atheism which too often passes for serious discussion these days.

Given the above, it is appropriate that the first of the two volumes by Roland Boer should begin with a chapter on Bloch. Here he gives an insightful and lucid account of Bloch’s elusive approach, while finding fault with him for running together the Bible and theology. The following chapters deal with Benjamin, Althusser, Lefebvre, Gramsci, Eagleton, Zizek, and Adorno and adopt the same general approach – to uncover the often extended reflections on theology and the Bible contained in their writings and then offer a critique of shortcomings in these reflections. Each chapter is a self-contained essay and there is, intentionally, little in the way of an over-arching theme. The same applies to the second volume which, only half as long as the first, deals with Goldmann, Jameson, Luxemburg, Kautsky, Kristeva, Badiou, Agamben, Lukacs, and Williams. The focus here is on what these authors have written about religion and to discuss to what extent religion has had an influence – albeit subterranean – on their thought.

All seventeen of these essays are well worth reading. They embody the fruit of many years of reflection and show a most impressive command of a vast and heterogeneous literature. They are insightful, thought-provoking, and also original in the sense of revealing unexpected aspects of those under discussion. The style is sometimes a little arch, but the analysis is always substantial and the assessment judicious. No one reading Boer will come away without being better informed and wiser.

Nevertheless, there is something unsatisfactory (so far) about Boer’s enterprise. This revolves around, first, Boer’s slippery and vague use of central concepts and, second, the lack of any unifying framework to bring these pieces together. These two are, of course, connected.

As to the misleading use of some central concepts, here are a few examples. Boer has it in for ‘theology’ which he wants to view as ‘necessarily distinct’ from the Bible. But he never defines the kind of theology he has in mind – indeed he talks of the ‘fascinating work’ of liberation theologians, so it cannot presumably be them. Boer also has it in for ‘the church’ but, again, uses this blanket term without telling us what particular church he has in mind. What and who constitute ‘the church’ has always been one of the central and on-going controversies in the history of Christianity. It is a far cry from the Basic Faith Communities in Brazil to the Vatican. Or take the (over brief) discussion of secularism at the end of Volume Two. At least there is a definition offered: secularism is ‘a way of living, thinking and acting that draws its points of reference from this world and this age … rather than any world above (the gods) or in the future (utopia)’. But how useful is this? Marxism is said to be, in a sense, ‘thoroughly anti-secular’ because it does not confine its considerations to the present epoch. The same would be true, presumably, of environmentalists. And the converse is true of most religious people: the Good Samaritan is not an un-this-worldly figure – far from it. But if the meaning Boer attaches to concepts such as theology and church are too narrow, when it comes to Marxism, he is far too generous. He describes Kristeva, Badiou, and Agamben as Marxists. This is to rob ‘Marxism’ itself of virtually any usefulness that it might have as an analytical tool.

All this conceptual vagueness no doubt has to do with the lack of a conceptual framework into which these (excellent) essays might be fitted. Boer himself tells us that his ideas remain ‘somewhat fragmentary’. He also tells us that he plans five volumes and that we will have to wait until the last volume to be told what ‘reasonable system’ may emerge from his commentaries. This is curious in that Boer also tells us that Volume One was intended originally as a self-standing work and only later did he think to add the other four. Yet Volume One has nothing that might be called a ‘reasonable system’ and merely finishes with the rather gnomic utterance that ‘it is only through a thorough materialisation, through the full materialist move, that the possibility of theology begins to emerge’. Volume Three, currently in press, will deal with Marx and Engels and so should be more focussed, but the denouement is a long way off. Meanwhile, any reader will have to remain content with the essays themselves. A ragbag they may be, but they never fail to inform, stimulate, and provoke serious reflection.