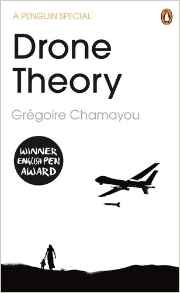 Begin by taking apart the mechanism of violence. Go and look at the weapons, study their specific characteristics. Become a technician, in a way. But only in a way, for the aim here is an understanding that is not so much technical as political… Rather than wonder whether the ends justify the means, one must ask what the choice of those means, in itself, tends to impose. (15)

Following on from Simone Weil, who implored us to look at the ‘means employed’ (15) as opposed to the ends pursued in warfare, Drone Theory presents us with a searing polemic on just one of those means: the drone. Chamayou had already prepared the theoretical terrain for this text in Manhunts: A Philosophical History (2012) in which he provides a genealogy of sovereign power that is cynegetic, that is, sovereign power that manifests as a power of pursuing, tracking, capturing or eliminating individuals. Of course, the drone could be seen as the technology of manhunting par excellence. It is a union of surveillance and lethal weaponry that can be controlled from afar. Rather than engage in conflict on the ground, lists of ‘targets’ are drawn up and these individuals are pursued and killed via drones. This is ‘preventive elimination of dangerous individuals’ according to a logic of security and ‘social defense’ (35) as opposed to reciprocal combat. The drone enables states to engage in manhunts across borders and on unprecedented levels. However, and as will be discussed, what is left unclear in the text is the extent to which the drone represents continuity with, or a new form of, sovereign violence.

As a whole the text is an attempt to subject the drone to a philosophical analysis, in other words, to construct a ‘theory of the drone’ (a more faithful translation of the original French title). The book proceeds through five sections that traverse the technological, psychological, ethical, legal and philosophical implications and novelties that are introduced with the drone. The central thread weaving together these various aspects is the question of reciprocity. What happens when those who are being fought against are deprived of the ability to fight back? The results are manifold and Chamayou does well to expose the fallacies and flaws in the arguments made in defence of drones. His analysis consists partly in a refutation of the ethical claims made by its proponents, claims that depict the drone as ‘precise’ and enabling a reduction in ‘collateral damage’ (140). Chamayou deftly unravels the arguments of those who dress up the drone in sophisms and euphemistic rhetoric. With a strike zone that has a 15m radius and that rests on the labelling of all military-aged men as combatants (unless explicitly and posthumously proven ‘innocent’ (142, 146) the reality of the drone is revealed as meting out death in ways that only an incredibly twisted and farcical logic could describe as ‘precise’.

While Drone Theory is replete with references to drone operators, policy-makers and theorists, the text offers less in terms of the impact it has on the subjects and populations targeted by drones. While there are occasional references to the corporeal valences of the drone and testimony from those who have lived under them (e.g. 44-5) this text mostly advances an understanding of the drone on a theoretical plane and asks what it is about the drone that means that traditional binaries and categories are no longer adequate when talking about drone warfare. If older forms of warfare relied on a series of oppositions, or binaries such as war/peace, police/military, and combatant/non-combatant, Chamayou undertakes to show how the drone radically undermines these oppositions to the point of their collapse.

With the breakdown of reciprocity in warfare, the inability of the ‘enemy’ to strike back against drones, Chamayou detects the emergence of an ‘unconventional form of state violence that combines the disparate characteristics of warfare and policing without really corresponding to either’ that is, the ‘militarized manhunt’ (32). There are no longer enemies to be confronted on the battlefield, but criminals to be apprehended and eliminated. The drone is controlled from a ‘safe zone’ (24) while the drone itself operates in the hostile zone. This has phenomenological implications in that the impact of the drone is not in an immediate sense felt by those controlling it, only apprehended visually, via a screen. This means for Chamayou that the ‘immediate phenomenological meaning of it’ is decimated (118). For Chamayou this has implications not only for the people operating the drone, but also for the citizens of states who use drones. Citizens of these states are no longer put at risk for the sake of the security of the state and as such the distinction between war and peace is increasingly less sharp:

waging war, but without sacrifices. Freely exercising war-waging sovereignty, but within the internal political conditions of sovereign security and protection. Abolishing the contradiction…. Exercising power, at an internal level, in war as in peace. (181)

This approach raises some issues, for while in theory, classical modes of warfare may have relied on these sets of oppositions, it is questionable to what extent in reality they did conform to these categorizations. Chamayou to some extent takes these binaries for granted without interrogating their applicability to ‘old’ forms of warfare to begin with. Thus there is an underlying tension between representing the drone as a rupture with older forms of state violence simultaneously as representing it as continuous with it. That is, there is a desire to trace the continuities with older forms of colonial violence at the same time as wanting to reject claims that this means the drone has had its legal precedent set in these older forms of warfare. Chamayou settles on describing the drone as the ‘weapon of an amnesiac postcolonial violence’ (95). This is a very interesting point, that begs to be probed in more detail. However, Chamayou does not detail a genealogy of this kind and instead focuses, in the remainder of the book, primarily on the rupture that the drone represents.

While Drone Theory contains some fascinating insights into the changing ethical and political landscape that the use of drones has instantiated, it is less clear where this leaves us with regard to the question of sovereign power and sovereign violence. The drone ‘extends and radicalizes the existing processes of remote warfare’ (17), yet it remains unclear to what extent Chamayou considers the drone to affect the underlying logic of sovereign violence (what he has called manhunting). It is left ambiguous whether Chamayou believes the drone to be simply a new face of an older economy of violence, or whether this economy itself is being altered through use of the drone. While both hypotheses figure in the book, it tends to present the drone in its singularity rather than in a broader context of state violence.

Drone Theory ends on a somewhat dystopian note, presenting a stark and troublesome image for the future. This is absolute asymmetric warfare that occludes the subject and leaves only the object in view. Chamayou detects a ‘nightmare on the horizon’ in which ‘weapons themselves become the only detectable agents of the violence of which they are the means’ (206). However, and as Chamayou takes care to remind us, this process is not automatic; in order to achieve a ‘relinquishing of political subjectivity’ we require ‘a great deal of subjective activity, involving huge efforts and enormous energy, designed to cover one’s tracks, efface evidence, and wipe out any trace of a subject involved in action.’ (207) Whether we face a future of war fought with robots that have been ‘programmed to respect the law’ (208) and where there is no trace of a subject left to hold accountable remains to be seen.

In short, the book’s crucial contribution is to make a start – or, rather a number of starts – at theorising a complex phenomenon that demands serious philosophical reflection. Chamayou’s style, marked by an intention to ‘enter the fray’ (16) that is philosophy, consists of theoretical forays into a field that has received scant attention. This is Drone Theory’s greatest strength because it leads to a highly varied and fecund series of reflections. It is also a weakness, for it means that at times the book lacks the depth of analysis that some of the topics and themes it throws at our feet require. We are left with numerous questions about subjectivity under drone surveillance/bombing, about the relationship between drones and sovereign violence and about the continuities and discontinuities between drone warfare and earlier forms of (colonial) warfare.