Marx & Philosophy Review of BooksReviews‘Bonfire of Illusions: The Twin Crises of the Liberal World’ reviewed by Daniel Whittall 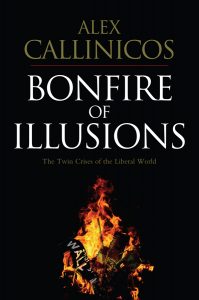 Alex Callinicos
Bonfire of Illusions: The Twin Crises of the Liberal World

Daniel Whittall is studying for a PhD in historical and political geography at Royal Holloway, …

With Bonfire of Illusions, Alex Callinicos adds to the ever-burgeoning literature seeking to explore and explain the present crisis of capitalism. Unlike many other volumes on the economic crisis, however, Callinicos emphasises the need to move beyond purely economic explanations both of how the crisis came about, and of what its eventual outcomes might be. Instead, he urges that readers must acknowledge ‘the perplexities of a world in dramatic flux both economically and geopolitically’ (18). On the whole, the book offers a valuable introduction for readers seeking to grapple with these perplexities.

Central to Callinicos’s account is an insistence on the connections between the economic and the geopolitical spheres. The book is structured into two main sections, bookended by an Introduction and Conclusion. In his Introduction, Callinicos makes the case for the connections between the economic and the geopolitical, insisting that the Russian war on Georgia in August 2008 and the collapse of Lehman Brothers in September that same year need to be understood as part of the same historical process. Whilst he casually theorises this period as representing an ‘epochal event,’ courtesy of an all-too-easy reference to the work of Alain Badiou, it is clear that Callinicos understands this fusion of geopolitics with economics as standing for ‘the end of the post-Cold War era,’ represented at its height by Francis Fukuyama’s notion of ‘the end of history’ (1-2). Both the Russian war on Georgia and the collapse of Lehman Brothers are emblematic, in Callinicos’s account, of ‘the apparent weakening or even demise of US hegemony’ (5).

The first, and most substantial, element of Callinicos’s argument is presented in section one, ‘Finance Humbled’. It is customary to begin analyses of the recent economic strife with a focus on finance, and in particular on the various processes of ‘financialization’ through which that sector came to dominate advanced market economies. Callinicos does not stray from this model, but he does produce an account of financialization which is as good as any other I’ve read. He departs from mainstream understanding by explaining that the process of financialization hinges on at least three different meanings of that term. The first is the notion that finance has become the dominant force economically. The second is the idea that finance has become increasingly autonomous from the rest of the economy, and that this has enabled the proliferation of different financial actors, including hedge funds and other elements within the ‘shadow banking sector.’ And thirdly, financialization also means ‘the integration of a wider range of agents in financial markets,’ including banks themselves, the shadow bankers, various capitalist enterprises, and even working class households, none of which are expected to get by any longer without reliance on finance in one form or another.

This tripartite definition of financialization is significant, allowing us to understand better the complex role which financialization plays in the global economy. Indeed, as Callinicos points out, these multiple and unstable definitions of financialization illustrate that ‘[t]he greater the weight of finance, the more then would it destabilize [sic] the economy as a whole’ (34-5). In order to examine the instabilities of finance capitalism, Callinicos evaluates the theoretical resources offered by the work of Hyman Minsky, F.A. von Hayek, and David Harvey. From Minsky, Callinicos draws his insights into the inherent instability of financial markets, whilst criticising Minsky’s failure to interrogate the relationship between finance and the broader capitalist economy. From Hayek Callinicos, focusing on the earliest work by that renowned theorist of neoliberalism, gleans the insight that credit-driven economic expansion becomes unsustainable over time, producing ‘destabilizing [sic] booms’ (44), though he inevitably criticises Hayek’s rejection of state intervention to prevent any subsequent bust. And from Harvey, as well as from Marx, Callinicos derives the insight that such economic crises as we presently inhabit are not extreme events, but are in fact inherent to the functioning of the capitalist system. This last insight allows Callinicos to insist that the current crisis, whilst manifesting itself in the financial sector, did not necessarily begin there, and that instead it ‘exposes the depths of the contradictions that have been at work in the entire process of capital accumulation and not merely, as Keynes and Minsky would contend, the dysfunctions of markets’ (50). From this, Callinicos argues that the present crisis represents the results of three parallel processes – a long-term crisis of overaccumulation and profitability; a chronically unstable financial system; and an increased reliance on credit bubbles as drivers of economic expansion.

The discussion here is detailed, and the arguments persuasive, except perhaps Callinicos’ deployment of Michael Kidron’s ‘permanent arms economy’ thesis – that Cold War arms spending kept profitability in this period artificially high – to explain the lack of any serious recession between 1949-73 (52). There are strengths and weaknesses to Kidron’s analysis, but Callinicos presents it as though the case were already settled, with no discussion of the drawbacks to Kidron’s thesis, nor the fact that Kidron himself would later distance himself from it. Aside from this point, Callinicos offers a solid theorisation of the ways in which the present economic crisis exposed ‘the systemic contradictions with which global capitalism has been struggling for decades’ (94).

The second part of Callinicos’s book, ‘Empire Confined’, develops his emphasis on the importance of the Russian war with Georgia within the context of the present crisis. The argument here is that the economic crisis and subsequent government bailouts undermine arguments about the irrelevance of the state in the neoliberal world, and that the Russia-Georgia war was emblematic of this ‘return of the state’. Callinicos charts the ways in which the financial crisis undermined the authority of supposedly international organisations, such as the EU, whilst nation-states pursued their own agendas and initiatives. Callinicos sees in this process ‘a shift in the balance of power between the state and capital’ (102), with the latter forced to acknowledge its reliance on the former. However, whilst this may have been the case in the immediate aftermath of the Lehman Brothers collapse, the return to business-as-usual since then might lead us to question Callinicos’s assumption that this shift was in any way permanent. One only has to think of the excessive significance attributed to the need to ‘stabilise the markets’ through ‘strong government’ following the recent British election and subsequent hung Parliament to recognise that the market still holds a considerable degree of influence over state powers.

Nevertheless, Callinicos’s argument that the Russian war on Georgia was a response to US efforts to expand NATO influence into Eastern and Central Europe is persuasive, as is his argument that this moment stood for the fight-back of state capitalism – in the form of Russian military strength – against the globalizing forces of international Capital represented in militarised form through NATO. Unfortunately, Callinicos spends far too little time discussing the Russia-Georgia war, or its wider geopolitical implications, for his argument to have the weight which it ought to. Indeed, the war and its geopolitical implications take up a mere 11 pages (106-116), after which Callinicos shifts to a discussion of the threat to US hegemony offered by China. Whilst there is little to quibble with in Callinicos’s discussion of this confrontation, and indeed much to praise in his examination of the challenges which are likely to face both the US and China, the fact that these are affected very little by the specific events of the Russia-Georgia war only serves to detract from the central significance placed on this conflict by Callinicos at the start of his book. Whilst Callinicos acknowledges that the financial crash and Russia-Georgia war are of unequal weight in significance, the fact that the latter is given such a short discussion, and that it serves primarily as a springboard for a discussion of the longer processes underwriting US hegemony and its relationship to China, only undermines Callinicos’s assertion that the events of 2008 were of central geopolitical, as well as economic, importance.

In his conclusion, Callinicos argues for ‘system change’ in response to the crises in the ‘Liberal World.’ He focuses in particular on the argument for ‘democratic planning’ of the economy, an important idea in the push towards greater economic democracy and a direct challenge to the work of autonomist thinkers such as Hardt and Negri and John Holloway. Again, however, he spends too little time on important and complex problems for them to be developed in a fully persuasive manner. This drawback is most evident in his discussion of the system of ‘universal direct income’ payable to all citizens as a challenge to the power of the capitalist labour market. Treating such a complex system in one paragraph, with no discussion of the complexities of coordinating international action nor of the challenges and opposition which such a system would come up against, leaves it feeling lightweight to say the least.

Despite these criticisms, Bonfire of Illusions is an important book for anybody wanting an introduction to how Marxist political economy can help to understand the times in which we live. It draws on the work of a diverse array of thinkers, engaging fully and constructively with a wide variety of non-Marxists. Whilst it ultimately fails to fully live up to its promise of linking the economic and the geopolitical strands of analysis, that is not to say that the effort to do so was not itself worthwhile.