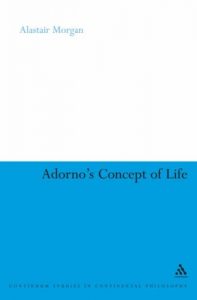 Alastair Morgan’s study of the concept of life in Adorno’s works argues that the latter owes a debt to the ‘life philosophies’ that precede him in the modern era (e.g., Schopenhauer, Nietzsche, Bergson). This is a conflict-laden undertaking that Morgan handles with due recognition, for the most part, of the negative, materialist dialectic that characterizes Adorno’s thought from early on through his last (posthumously) published book, Aesthetic Theory (1970). At first glance Morgan’s project may seem too insistent, in the light of Adorno’s well-known assertions that life today, in the period of late capitalism, is ‘damaged,’ and even that it ‘does not live’. But the author makes his case judiciously, arguing that the ‘idea of an emphatic life that can escape all systematic designations is a central ethical concern of Adorno’s philosophy, even if it is traced negatively’ (1). Each of the book’s eight chapters addresses a different relation of ‘life’ in Adorno’s work, e.g., ‘life and suffering’ or ‘exhausted life’. Morgan shows his awareness of the serious problems involved in his project when he notes, for instance, Nazism’s use of some of life philosophy’s basic figures as well as the counter-materialist bias that leads so quickly to intuitive vitalism and the irrationalism of transcendental leaps (6-7). Morgan’s book will appeal to anyone who wants to understand Adorno’s thought on its own terms – necessary if one is not to distort or falsify that work and thus betray the real social need for it.

Treading near the borders of fascist thought and undialectical theory, as Morgan’s study sometimes does, worries me, however, as a reader of Adorno who finds his materialist dialectic, anti-fascism, and utopian hope for a better world insistently and unapologetically thorough; these are at the core of Adorno’s thought, interwoven with his underlying, critical Marxism. He saw that the historical failures of the socialist project as they unfolded in the USSR, and then also in Eastern Europe after World War II meant that the revolution had failed – and that despite Marx’s 11th thesis on Feuerbach, the social need for philosophy persists through the period of late capitalism, in which we still live. Because philosophy persists, in the social need for it, he accepted the need to know and practice it in his own critical terms, and this, I believe, largely accounts for whatever interest he had in the life philosophies, in his early years following the influence of Lukács, as Morgan notes (15-17). There is in Adorno no theological remnant, no trace of desire for the irrational leap, nothing smacking of the mystical, as in Kierkegaard, say. In the tradition of Kant and Hegel (with detailed qualifications), and of the work of the mature Marx, he will not curtail reason but reflects critically on it and thinks things through as thoroughly as possible in full acknowledgment of the reality of contradictions and the limitations of conceptual thought in the face of its differing objects, maintaining always utopian hope as his philosophical standard. Morgan deals well with aspects of this complex problematic in Chapter 4, ‘Dialectics and Life’, in the subsections on `Mediation, Materialism, and Constellation’, where, responding to the work of Brian O’Connor, he notes that his own ‘response to such a critique would be that Adorno is not interested in resolution or solution, but is interested in the deepening of certain fundamental contradictions …which takes place through a process of mediation’ (57). This is true to Adorno’s thought, which eschews synthesis as an impulse and practice of bourgeois ideology and instead works the extremes, i.e., deepens contradictions. Recognizing this is one of the chief difficulties in learning to read Adorno.

Among this book’s strengths are its sure grasp of Adorno’s working philosophical terminology and concepts and of the conceptual and experiential forces at play in his thought. Morgan also knows rather well the historical-philosophical context, or terrain, of Adorno’s work, including its dynamic relations with the thought of Kant, Hegel, Marx, Luckács, and Benjamin – as well as his nearly lifelong argument with phenomenology, first with Husserl (whom he respected), and then more strongly with Heidegger. Adorno remains the most thorough, persistent critic of the social and political implications of Heidegger’s philosophy, which he thought fascist to its core.

Morgan’s discussions of Adorno’s relations to the work of modernist or more recent thinkers and writers are always of interest but tend to be too brief. His take on Adorno’s views of Beckett (112-14) and Kafka (116-17), for instance, although thematically limited, still seem so cursory as to be expendable. His discussion of Adorno’s aesthetic theory – in ways, to the consternation of many an economist Marxist, the heart of his work – tends to be scattered and, again, brief, although I found particularly interesting the treatment of the ‘shudder,’ basically the experience of an artwork that ‘dislocates the egocentric nature of subjective experience’ (97-9), allowing a fuller sense of the object’s differences, opening paths to knowledge via the artwork. Had Adorno lived to finish his final book, Aesthetic Theory, its motto was to have been Friedrich Schlegel’s assertion that ‘what is called philosophy of art usually lacks one of two things: either the philosophy or the art’ (Aesthetic Theory 366), and Morgan falls victim to this danger – on the side of traditional philosophy.

Adorno’s Concept of Life also indicates the continuing impact of Adorno’s thought: in the work of Giorgio Agamben (26-31,126-8), say, and his concept of ‘bare life’, although Morgan does not take Agamben’s work to task for its non-dialectical nature or for its roots in Heidegger and Carl Schmitt (National Socialism’s notable thinkers), and Foucault. In the book’s concluding paragraph (137) he turns to the ethical thought of Judith Butler and her quasi-Adornian notion of ‘becoming human’, which is intriguing but undeveloped in his argument. And she, like many others, does not maintain the utopian standard of Adorno’s thought, which makes her ethics essentially different from his. Morgan also includes brief but trenchant critiques of Deleuze’s and of Hardt and Negri’s efforts to use Adorno’s thought, pointing out (in a critique rooted in Horkheimer and Adorno’s 1944 book Dialectic of Enlightenment) that they invoke ‘the sciences of molecular biology and neuroscience as supporting arguments of immanent multiplicity and complexity without any appreciation of both the multiplicity of different theories within such sciences, and their role and status as sciences with a certain claim on power and knowledge,’ resulting in ‘an invocation of scientific models that is highly problematic’ (129). Morgan periodically acknowledges (a bit unusual among those who write on Adorno) the essential debt of Adorno’s thought to the mature work of Karl Marx, especially Volume I of Capital.

These and other references to continuing uses of Adorno’s thought are important to the book, as to anyone interested in that thought, demonstrating its persisting life, one might say, if mainly in its provocations. This brings up another large problem, only implicit in Morgan’s study. Can Adorno’s thought be made accessible and useful (philosophically or otherwise) for living in society as it exists now, in this stage of late capitalism; or is it to be studied only for its materialist, dialectical, and negative impact, and its critically understood Marxist dimension – which from any mainstream perspective renders it at best a kind of seldom heeded minority report? Morgan’s own engagement with Adorno’s thought (at least in this book) remains deeply aporetic in this sense, the best examples of which concern the notion of Adorno’s ethics. Like Alain Badiou, he considers ‘ethics’ a marker of bourgeois ideology, the bad conscience of morality as he says in his 1964-5 lectures on History and Freedom. J.M. Bernstein’s 2001 book, Adorno: Disenchantment and Ethics, is the most detailed of recent misguided efforts to appropriate Adorno’s negative ‘ethical’ thought into a positive (and anti-Marxist) ethics for living in and with things-as-they-are, thus retarding the structural social change that Adorno always sees as necessary. Morgan’s book, in my view, despite its critical edge (including critique of Bernstein’s book (84-91, 130)) and fine scholarship, wavers between the wish to use Adorno’s thought in positive ways, in the world as it is, and the seldom stated, always constraining social need to maintain and extend its negative dialectic, until the better world is achieved. Adorno himself felt no such ambivalence, which is why his work is so intensely interesting and, in the end, socially valuable.

In addition to consideration of modern life philosophies, and of Aristotle, one can reach back (negatively) to Plato for a sense of what Adorno means by the term ‘life.’ In the Gorgias, while debating how best to live, Socrates wonders whether our life is not actually death, whether we are in fact dead even though we think we are alive. At the dialogue’s end, he suggests to Callicles that the best way of life, personally, is to live always practicing justice. For Adorno – who was of course no Platonist – the idea of Justice would in part redeem this dialogue from antiquity. His own idea of and hope for universal social justice in the world to come, deeply informed by his Marxism, permeates his lifework – they are the sine qua non of any ‘ethics’ he might be said to have – and I miss this emphasis in Alastair Morgan’s otherwise fine and thoughtful study.