Marx & Philosophy Review of BooksReviews‘Walter Benjamin and Bertolt Brecht: The Story of a Friendship’ reviewed by Meade McCloughan 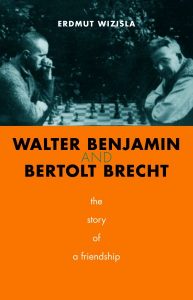 Erdmut Wizisla
Walter Benjamin and Bertolt Brecht: The Story of a Friendship

This is an important addition to the literature on Benjamin. Wizisla’s title deliberately parallels that of Gershom Scholem’s book on Benjamin, and indicates his intention to put Benjamin’s relationship with Brecht on a par with those with both Scholem and Adorno. In doing so, Wizisla is counteracting the tendency to downplay Brecht’s importance to Benjamin, a tendency initiated by Scholem and Adorno and continued by those influenced by them (not least in the editing of Benjamin’s Gesammelte Schriften). The result both enriches our understanding of the ‘constellation’ of friends Benjamin positioned around himself and highlights his commitment to Marxism.

One reason why Benjamin and Brecht’s friendship has been underemphasized is because it was not, unlike Benjamin’s friendships with Scholem and Adorno, primarily an epistolary one. Brecht was never a great letter writer, and during most of the 1930s postal communications between the two were circumscribed by fear of censorship. Instead, the bond between the two men flourished during the time they spent together. Wizisla calculates that between 1933 and 1940 they ‘spent a total of more than eleven months living and working in direct proximity to each other’ (55), most notably during Benjamin’s stays with the Brecht household in Denmark. Much of the charm of the book comes in its accounts of these visits, for example in relation to the games played by the various emigrés who gathered around Brecht. The book includes three photographs of Benjamin and Brecht playing chess, which have been expertly analyzed by Andrew McGettigan in the May/June 2010 issue of Radical Philosophy. Card and board games also featured, including Monopoly (at which, according to Brecht’s children, Karl Korsch didn’t like losing!).

Most of the book is devoted to the intellectual substance of the relationship. Wizisla deals with this under three headings: first, Benjamin and Brecht’s collaboration in the early 1930s on an abortive project for a new journal to be called Krise und Kritik; second, Benjamin’s work on Brecht; and third Brecht’s responses to and influence on Benjamin’s work. The Krise und Kritik project was the most sustained of a series of initiatives Benjamin and Brecht were involved in, including the famous plan ‘to annihilate Heidegger’ in a reading group (41). Wizisla guides us through the deliberations for the journal, adding as an appendix the minutes of the discussions. His approach throughout is to track in very scholarly detail the specific influences, parallels and resonances between the writings of the two men. However, he sticks so close to the sources that one often cannot see the wood for the trees. In fact, the book seems to presuppose that one already has a firm grasp of the terrain, and so can assimilate and interpret the detail provided accordingly.

The philosophical aspects of Benjamin’s and Brecht’s thinking are not treated by Wizisla, who instead focuses on the literary and political issues actually discussed by them. Their interest in Heidegger was short-lived and not followed through, and in any case seems to have been more directed to the type of intellectual leadership Heidegger appeared to aspire to rather than the content of his philosophy. Philosophical topics were to be addressed in Krise und Kritik, but by Kracauer and possibly Adorno, not Benjamin. The idea of critique or criticism itself, central to the project of the proposed journal, did stimulate a momentary philosophical debate, with Benjamin wanting to assert its Kantian (and romantic?) character and Brecht resisting this in the name of a scientific empiricism (though one which can also be seen as having Kantian antecedents, by way of the logical positivists).

Wizisla’s work is already proving to be rewarding for Benjamin and Brecht specialists, who are best placed to appreciate his scholarly endeavours and develop them accordingly.