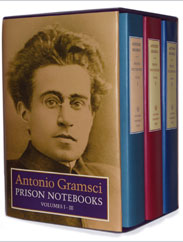 Joel Wainwright is Professor of Geography at the Ohio State University. …

When I was in graduate school in the 1990s, the most difficult book to find in the library was Antonio Gramsci’s ‘prison notes’ (as we called them). This elusive book attracted all the theoretically-minded students, from anthropology to geography, political science and beyond. It was whispered that Gramsci’s notes revealed a Marxism that was open to anyone. They seemed to hold the promise of bridging impossible chasms: matter and ideas, theory and practice, Marx and Foucault—even Derrida and Lenin. Unfortunately our library had only two copies, and one was always ‘missing’ (no doubt ‘liberated’ by a very ‘open’ Marxist), and the other was always checked out. The challenge of obtaining these notes, like the brutal conditions under which they were written, gave the book an unmistakable glamour. It was as if Gramsci’s notes held the key to all your theoretical problems—if only you could get hold of them.

Now older and wiser, and with Gramsci’s prison notebooks – undoubtedly among the greatest achievements of Marxist philosophy – comfortably ensconced on my bookshelf, I know that one of the many problems we faced as graduate students in reading Gramsci started with the notion that there was a copy of the prison notebooks in the library at all. There wasn’t, at least in English. The book we were trying to check out – the International Press collection entitled Selections from the Prison Notebooks (1971) – is a compilation of a small fraction of Gramsci’s notes. Moreover, this still-standard collection has numerous problems. The most important of these is that the editor-translators, Quintin Hoare and Geoffrey Smith, combined different notes (often from different notebooks) to produce a thematically coherent version of the Notebooks—one where, for instance, a plethora of diverse writings on politics are lumped together in one section (1971: §II). Notwithstanding the virtue of reorganizing Gramsci’s notebooks for accessibility, this means that readers are not actually reading the notebooks, and are inevitably missing much of their complexity and richness. Moreover, there are basic philological limitations. Reading a passage from the 1971 collection (or Marks’ 1957 collection, for that matter), one cannot know the original source – notebook (Q) and note (§) – of any particular passage, its date of composition, nor whether Gramsci wrote multiple drafts. Most problematically, many notes were arbitrarily cut or recombined. For instance, Edward Said famously complains in the introduction to his Orientalism (1978: 25) that Gramsci’s remark that ‘it is imperative at the outset to compile … an inventory’ of the historical processes that have produced ‘what one really is’, was ‘inexplicably’ deleted from ‘the only available English translation,’ i.e. Hoare and Smith (1971; but compare 1957: 59). (In a true labor of love, Marcus Green, Secretary of the International Gramsci Society, constructed concordance tables for these texts: http://www.internationalgramscisociety.org/resources/concordance_table/index.html).

In fairness to Hoare and Smith’s Selections, the first complete, critical edition of Gramsci’s notebooks in Italian– edited by Valentino Gerratana – was not published until 1975. Yet while some of the limitations were resolved by the publication of two further collections of prison notes (1985, 1995) which use Gerratana’s texts (and include Q/§ annotation), the pattern continued, despite multiple translators and publishers, of picking through Gramsci’s notebooks and reorganizing his notes and ideas thematically. Moreover the critical apparatuses of these collections are highly uneven. All this helps to explain the proliferation of multiple, competing interpretations of Gramsci’s ‘open Marxism’. The challenge of textually grasping his prison notebooks undoubtedly contributed to many partial and weak readings.

What we graduate students genuinely needed (though I, at least, did not know it), was a complete and critical edition of the Prison Notebooks, translated in full and replete with explanatory footnotes. No such book existed then, but thanks to Joe Buttigieg and Columbia University Press, soon enough it will, when we will have a complete set of Gramsci’s Prison Notebooks in five volumes. To date three volumes have been published in hardback (1992; 1996; 2007), covering Q1-8 and roughly half of all Gramsci’s notes. Buttigieg’s translation of the Notebooks stands, along with Gerratana’s Italian edition, as the definitive source (see the essays in Green 2011, §IV). And Buttigieg’s critical notes are the most careful and complete in any language. The drawback is that these hardback books are heavy and quite expensive (US $60 each), forcing graduate students to continue to depend on the library for access to them.

Hence the delight of finding that Columbia University Press has now (2011) published a box-set containing softback editions of the first three volumes of Buttigieg’s critical edition. The three volumes are sold together in an elegant hard case for only US $60. These softback books have the same pagination as the earlier hardbacks but are more portable. This trio of softback books has its limitations. The quality of the paper and the printing is slightly inferior to the original, hardback version. Whereas the photos and prints in the hardback volumes are clear, high-contrast, and printed on glossy paper, in the softback edition they are smudgy and blurred. And because the complete critical edition with index will run to five volumes, there is something odd about holding texts that are so carefully prepared, yet incomplete. I hope and presume that after volumes IV and V are published in hardback, Columbia will release a second softback set with these two volumes in a matching case.

Thanks to Joe Buttigieg and Columbia University Press, then, graduate students will not need to compete in vain to read Gramsci’s prison notebooks. The existence of an affordable, complete, critical edition of the prison notebooks will represent a major scholarly and political achievement, the consummation of generations of social labor by friends and scholars of Gramsci. As Gayatri Chakravorty Spivak exclaims in a blurb for the back cover of the paperback edition: ‘Until Joseph A. Buttigieg’s meticulous translation and critical attention to Antonio Gramsci’s Prison Notebooks, this invaluable text, a testimony to the most emancipatory thinking of our time, was available to English readers only in an artificially contrived form. Now Buttigieg’s monumental and magisterial work is available in paperback. Scholars, teachers, students, activists, general readers—rejoice!’