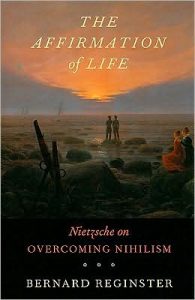 Bernard Reginster
The Affirmation of Life: Nietzsche on Overcoming Nihilism

This is an excellent work of analytical, systematic philosophical reconstruction, which should be of particular interest to people interested in Marx. The very distance between the philosophies of Marx and Nietzsche is perhaps reason enough for anyone interested in the former to dip into the latter on occasion – all the more so, given that both are part of the same post-Kantian tradition. In particular, Marxists might want to see how their man stands up to the kind of critique Nietzscheans would be inclined to make of him. At another level, Marx and Nietzsche are sometimes paired together, as in Ricoeur’s famous description of them as being (along with Freud) ‘masters of suspicion’. Attempts are occasionally made to suggest that there is some affinity between Marx’s disdain for moralizing and Nietzsche’s critique of morality. Reginster’s book is helpful in both respects, that is, both in helping us understand the divergence between Marx and Nietzsche and in revealing a striking element of coincidence.

For Reginster, Nietzsche’s ethical thought is centrally concerned with the problem of nihilism. This is interpreted as taking two forms: first, a sense that the highest values have been undermined such that they no longer guide and inspire agents; second, a sense that the world can no longer be supposed to be hospitable to the values agents use to guide and inspire them. These two distinct senses of nihilism result in what Reginster refers to as disorientation and despair respectively. We can grasp the difference by noting the two ways in which the ‘death of God’ can be taken to have nihilistic consequences. For someone who holds that God is the source of values (as with divine command theories), the untenability of belief in God will lead to the disappearance of those values and hence disorientation. For someone who holds instead that God stands for the condition of possibility of the realizability of values (as for example with Kant), the erosion of belief in God will lead to the despair about the realization of those values, which can nonetheless still be held to be valid. (Despair can of course lead to disorientation, as with Kant’s discussion of the ‘righteous man’ in §87 of the Critique of Judgment.)

The ‘death of God’ is one instance of the way in which values which are supposed to be objective come to be undermined. Reginster also examines the effects of naturalistic skepticism on Platonic realism and Kantian rationalism. Accordingly, normative objectivism itself is seen to be the problem. The first part of Nietzsche’s attempt to overcome nihilism therefore consists of a meta-ethical reconsideration of the source of normativity. Reginster identifies two distinct elements in Nietzsche’s thinking in this regard: normative subjectivism (values are subjective, desire-based constructs) and normative fictionalism (values are subjective inventions which are taken as if they are objective). These meta-ethical strategies, however, whilst they can prevent disorientation, leave the problem of despair untouched. In fact, they can exacerbate it. The Christian, for instance, might be willing to understand her values in a fictionalist fashion, but then the issue as to what possible grounds there are for thinking that these values are realizable in the world becomes all the more pressing. For Nietzsche, therefore, we need to change not just the way we think about values, but the content of our values as well.

The problem, as Nietzsche sees it, with traditional value-systems is that they are in essence life-negating. They take the prevalence of suffering and pain in the world as it is to be a reason to reject this world in favour of some better world in which suffering and pain are eliminated. However, the metaphysical postulates which underpin the conceivability of such better worlds amount to little more than wishful thinking. It is the awareness of this which leads to despair. The task, therefore, is to revalue suffering and pain in such a way that they no longer count as arguments against life.

All this should resonate with readers of Marx. For far from being yet another apostle of the ‘religion of comfortableness’ (Nietzsche’s characterization of ‘socialism’), Marx precisely values work as ‘seriousness’, ‘exertion’, indeed as the ‘overcoming of obstacles’ (Marx 1973, p. 611). Indeed, Marx’s example in this passage– ‘[musical] composing’ – is one Reginster himself, following Nietzsche, makes much of (179-180, 192-194). Reginster therefore both allows us to recognize a normative core common to both thinkers and provides us with a sophisticated philosophical account of it.

There is of course much in Nietzsche’s use of the idea of the will to power that Marxists would want to disagree with. Reginster enables us to see two relevant aspects. Firstly, Nietzsche is silent about which desires or activities are acceptable opportunities for the overcoming of resistance, thereby leaving it open for his doctrine to be used to justify, for example, Nazi expansionism (181-182). By contrast, Marx would want to connect the idea of the overcoming of resistance to a philosophical anthropology which makes human productive activity central. Secondly, Nietzsche construes the will to power in a strongly elitist way, such that only ‘the great’ can demonstrate it. This seems erroneous, for surely difficulty is agent-relative. If what is difficult for me is easy for you, then for me to achieve it would be an exercise of the will to power, but not for you. Reginster suggests that Nietzsche would resist such relativization of difficulty and resistance on the basis that it would detract from the greatness of the exceptionally difficult accomplishment (178-179). But I fail to see to see that this would be so. The difficulty I experience in, for example, understanding Nietzsche doesn’t mean that I cannot appreciate the achievements of those who make much better sense of him than I manage – in fact, the former would seem to be a condition of the latter. I suspect that Nietzsche’s absolutist elitism serves as a surreptitious way of injecting some substitute objectivity into his account. A Marxist emphasis on realized species-being, whereby individuals are able to appreciate, identify with and be inspired by the different and in some cases greater achievements of others, could provide a better way of developing the idea of the will to power.

The big problem for Nietzsche is getting the theory of the will to power to provide the basis for the ‘revaluation of all values’. It certainly goes a fair way in showing how suffering and pain need not be viewed as purely negative, indeed can be affirmed as part of what makes life satisfying and enjoyable. But much suffering and pain is not and in all probability could not be affirmed in the way Nietzsche would seemingly want. Reginster is sensitive to this, but argues that Nietzsche’s accomplishment can be seen as a matter of more modestly reconfiguring our expectations: ‘In wishing for a better life, at least, we will no longer aspire to something like the Christian heaven or the Buddhist nirvana, that is to say, a life utterly devoid of pain and suffering, in which we do not have to work or struggle to satisfy our desires, a life of “comfortableness”’ (235). But when did “we” ever aspire to this? Or, to put the question another way, which philosophers have ever recommended that we aspire to this? There is really only one answer: Arthur Schopenhauer. One of the great strengths of Reginster’s book is his very subtle exposition of the Schopenhauerian background of Nietzsche’s thinking. However, this creates the problem: the more one immerses oneself in Schopenhauer in order to be able to understand Nietzsche, the more one is inclined to take Schopenhauer to be the exemplary, representative modern philosopher, the one who lays bare the life-negating nihilism of Christian-Platonic culture, etc., etc.. Other philosophers – for example, Kant, Fichte, Hegel, Marx – present quite different accounts of the ‘better life’, which Nietzsche’s insistence on the value of suffering can be seen as illuminating, not countering. (Which is not to say that Nietzsche doesn’t have other points to make against these thinkers and their versions of the value of life.) Then again, this tendency of Nietzsche scholars both to understand and justify the object of their study by privileging his main philosophical antecedent has a rather clear parallel in the familiar and self-supporting insistence on the Marx-Hegel connection!