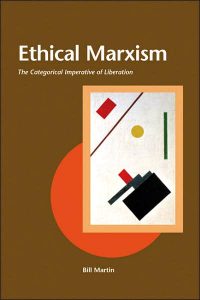 David Marjoribanks is an Associate Lecturer in Philosophy at the University of Kent. His PhD thesis …

Ethical Marxism is an attempt to present a Marxist ethical theory that shows us that we must overthrow the existing society in favour of creating new forms of society. According to the author, the theory aims to subordinate strategic thinking to ethical thinking, placing ethics rather than economics or social science at the heart of Marxism. However, this Kantian interpretation of Marxism aims not to eliminate the importance of strategic thinking – to do so, Martin writes, would be to render the ethical dimension into a ‘mere formalism’ (1); ethics alone does not have what it takes to be ethical (45). The ethical concern is rather the ground for the systematic scientific theorising. He attempts to demonstrate that the ethical has materiality. Freedom, human flourishing, caring etc. are real and not merely epiphenomenal, contrary to ‘orthodox’ Marxism which sees consciousness as determined by an economic ‘base’. Martin argues that Marxism ‘needs to resituate the ethical moment at its core’ (5).

It is perhaps rather curious that Martin feels the need to argue so strongly for ‘resituating’ the ethical moment at the core of Marxism – Marxist theory has not been short of interpretations that find its core in ethics. It did not take long for Marxism to be framed in Kantian terms, and the relation of Marxism to ethics has by no means been an under-explored one. The ‘Marxist Humanism’ of the 1950s and 1960s generated numerous ethical interpretations of Marxism centred on Marx’s theory of human nature, and in the 1980s the movement known as ‘analytical Marxism’ dealt in considerable detail with Marx’s views on ethics and social justice. More recently, to take just two examples, R.G. Peffer (1990) and Lawrence Wilde (1998) have offered interpretations of Marxism that demonstrate its foundations in moral values. Martin’s contribution, however, is in demonstrating that ethics demands revolution, that ethics is real and has materiality, and that certain ethical questions that Marxism has neglected – animals, agriculture, Maoism – must be paramount.

Martin states that his purpose here is not original scholarship on either Marx or Kant, but rather an ‘intermotivation of themes’ (18). However, if the aim is to show that ethics ought to be at the heart of Marxism, rather than merely that Marxism’s ambivalence on ethical issues is unsatisfactory, surely some original scholarship is necessary to show that ethics can indeed be, or is, at the core of Marxism? Martin writes of Peffer’s book that his concern is Marx’s embarrassment toward ethics, but he does not properly seek to understand this, or investigate whether it might have some basis which would set limits to an Ethical Marxism. Martin is not the only author to have set aside Marx’s criticisms of ethics, but having said that his concern is Marx’s embarrassment, it is unfortunate that Martin does not explore the reasons for this, and whether anything of Marx’s critique of morality and justice ought to be preserved rather than ignored and rejected.

Upon glancing at the contents pages, one sees that Martin’s understanding of Marxism is very broad. Martin writes that his sense of the radical project is open, even ‘ecumenical’ (14). Indeed, the question might well be asked, Why call it Marxism at all? Is this ‘radical project’ Marxism or something beyond Marxism? For example, the ‘animal question’ and vegetarianism are raised to show where great wrongs are done, yet Marxism has almost turned a deaf ear. But does Marxism have anything to do with these questions? The section on animal liberation and its connectedness to human liberation, while providing a very clear, powerfully argued summary of the compelling case for vegetarianism, nevertheless fails to confront its relation to Marxism. Martin wants to argue that Ethical Marxism must be concerned with such issues, but classical Marxism’s view of nature as apparently a resource for mankind’s use and dominion over seems to be a conspicuous gap. Can Marxism be ethical in this way, or does Ethical Marxism have limits, such that an adequate ethical approach must go beyond Marxism?

Martin acknowledges this question. His response is that ‘Ethical Marxism’ still holds onto a certain Marxist methodology and categories of analysis (74). Unfortunately, these are only in the background, at most, in this book. If it is this methodology and these categories of analysis that justify the radical project’s being labelled ‘Marxist’, one might expect these to have much more focus in this book.

A few words on style and structure: the book is poorly structured, containing incredibly long chapters, subdivided ad infinitum into smaller sections, mostly of a page or half-page, and sometimes bearing only a tenuous relation to one another. Consequently it is hard to follow the argument. The style is rather tangential and discursive, skipping through a vast territory while leaving the reader feeling unsatisfied with the detail. The ambit of this book is huge and ambitious, but as a result it is not careful enough at times to do justice to the material it covers. The sections on imperialism and vegetarianism, for example, provide good summaries but add little to the literature, despite occupying an enormous bulk of the book.

It is unfortunate that not only do many sections add little of value, but certain central, not uncontroversial claims which are in need of justification are merely asserted, e.g., about the ‘imperialist social system’ and its ‘ideological operatives’ (93). The former in particular is fundamental. It is argued that ‘imperialism’ is the ethical question of our time, though Martin does not explain in detail or justify this claim. Imperialism is claimed to be a mode of production (128), and Martin endorses an essentially Leninist understanding of imperialism, without justification or consideration of its criticisms. His stated aim is not to provide a theory of imperialism but to show the ‘rootedness of the present form of capitalism … in the trajectory of imperialism, and then to reiterate the point that this trajectory, while driven…is also guided by the ruling class’ (130). Surely, this claim requires sociological study and justification rather than mere assertion?

Most controversially, Martin attempts to associate the theory of Ethical Marxism with a current of ‘vanguardist’ Marxism that runs through the Russian Revolution, the Stalin period, and even Mao’s ‘Cultural Revolution’. To allay readers’ fears Martin discusses a few historical events to present the achievements of these eras and to balance the standard ‘received’ picture. His argument here does not refute the standard picture by presenting evidence to the contrary, but rather offers a rather piecemeal alternative account. This will not persuade many readers who do not already agree with Martin’s claim that ‘enough of Maoism either was or is right that it ought to be carried forward and built upon’ (341).

Ethical Marxism, for Martin, is a philosophical theory of justice that demonstrates the need for revolution. Unfortunately, it is very vague as a theory and does not provide clear pronouncements on what justice requires – beyond ‘revolution’. All it really tells us, in the end, is that ‘imperialism’ and capitalism are bad and ought to be overthrown. But what is the content of this theory? What does it add, beyond Peffer’s or Wilde’s books, for example, beside the insistence (and it is an insistence more than justified argument) on the ‘categorical imperative’ of revolution? Martin’s contribution is vague and insubstantial. His primary additions to the debate – imperialism, the animal question, the question of agriculture, and Maoism – each remain undeveloped. Someone seeking an interpretation of Marxism that takes ethics at its core and explains what Ethical Marxism means would do better to read Peffer or Wilde.