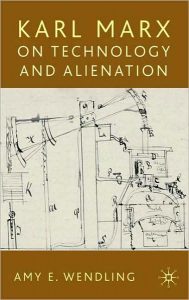 Chris Arthur taught for many years at the University of Sussex. He is the author of Dialectics of …

This book offers a solid philosophical (as opposed to economic, sociological or political) assessment of the impact of technology in Marx’s work.

Wendling’s thesis may be summarised as follows. For Marx, technology exemplifies the interaction between human beings and nature. Marx’s understanding of this interaction changes throughout his work. An older humanist and vitalist paradigm sets human activity against nature as a qualitatively different force. A newer ‘thermodynamic’ paradigm, which had spread rapidly from physics to the human sciences, takes the human and the natural to be in continuity. Marx’s work is at the juncture of these paradigms and contains elements of each. This affects his deployment of the category of ‘labour’. Labour is demoted from its position as a meaningful activity, which determines political status, and it becomes a mere nodal point where energy is transferred from the labourer to the product. In his intellectual trajectory Marx increasingly appealed to the new paradigm and hence looked to the abolition of labour to consecrate human freedom.

Wendling offers a comprehensive treatment of technology and alienation in Marx, drawing on Postone, Rabinbach, Blumenburg, Harraway and others. She demonstrates that Marx’s Capital was informed by the thermodynamic paradigm, key to which is the conservation principle and the new discipline of physiology. She contrasts the new view of labour-power as stored energy with the older view of labour as creative form-giving activity. She sees Marx as moving away from the latter to the former. Marx’s own condemnation of machine-like labour she puts under the head of ‘capitalist humanism’ (a reaction provoked by capital itself).

The first chapter, on ‘Alienation’, culminates in ‘technological alienation’ defined as ‘ a situation in which the practical life-activity of the vast majority of human beings is undertaken as labor on machines that they neither own nor understand’. (56)

The second chapter on ‘Machines and the transformation of work’ shows that Marx’s notions of “labor”, “nature”, and “revolution” undergo crucial modifications and development following his researches on technology and machines (by the way, the cover reproduces a splendid sketch by Marx from 1851 of a steam engine). Marx’s assimilation of the ideas of German scientific materialists, such as Büchner, causes him to impose a thermodynamic model of labour on the ontological model of labour he inherited from Hegel. ‘In this thermodynamic model humans are set into conformity with machines and nature rather than set in opposition to them.’ (59) She also claims Marx has a later theory of change in thermodynamic terms, as a restoration of systemic equilibrium, rather than in political terms. (This might apply to some self-styled Marxists but surely not Marx!) But Marx does not fully or uncritically integrate the new paradigm into his thought. ‘Instead, Marx’s work deploys both the older and the newer models of labor, and the older and the newer models of revolutionary action.’ (61)

Chapter three ‘Machines in the communist future’ draws on Marx’s Grundrisse and especially the fragment ‘on machines’. This discusses the shifting conceptions of the human and the natural in modernity; and it claims to find in the fragment a vision of ‘the symbiosis of human and machine in the production of material wealth’. (117) But she says Marx in Capital falls back into the ‘productivist metaphysic’.

Chapter four takes on Capital. She claims that Capital is an ambiguous treatise.

‘Marx’s work in Capital is more a performance of thought than a straightforward treatise. In this performance, Marx adopts the characteristics and concepts peculiar to capitalist thought. In other words, he speaks in a variety of voices in the text, but rarely his own.’(128) For ‘in Capital Marx is always implicitly operating in the context of alienation.’ (129) He is simply documenting the capitalist world and its norms.

Thus in Capital the energeticist picture of human embodiment in presented as accomplished. At the same time romantic anti-capitalist thought arises as an oppositional ideology, crafted as a response to the tenets of scientific materialism, a ‘humanism that Marx’s thought performs within Capital.’ (131)

This chapter veers off at a tangent with the discussion of women and work which is not central to the main theme.

The final chapter, ‘Alienation beyond Marx’, surveys the struggle in the modern soul between technophilia and technophobia. Wendling ends by endorsing Harraway’s critique of technophobia.

I turn now to the ‘Introduction’ which is really a conclusion. This takes further her reading of Capital as the ‘performance’ of capital’s contradictions. (9) As she says, if this is Marx’s strategy, it requires a reader who does not take its concepts at face value. (5) But she seems unsure about Marx’s attitude to his own concepts (213). She temporises by saying: ‘Marx’s performance of capitalist science and capitalist humanism occurs both consciously and unconsciously’. (9)

As far as Wendling’s account of Marx is concerned, I have a worry. Throughout she seems to conflate her own distinction between ‘labour’ and ‘labour-power’, where capitalism reduces ‘labour’ to ‘labour-power’(4), with Marx’s, which provides a technical solution to the paradoxes of the labour theory of value. Thus she says ’labor is a qualitative notion, labor-power its quantitative counterpart’ (104); but this is not, as she implies, Marx’s distinction. For him labour-power is a (qualitative) capacity to labour, and labour counts quantitatively as socially necessary labour-time. She speaks of Marxian ‘labour-power’ as measurable units of force added by workers to production. (83) But this is certainly wrong. The units are hours of (value-creating) labour. Crucially ‘labour-power’ is a value, labour (as the source of value) is not.

For me the most interesting chapter is the second, on the historical context, covering the influence on Marx of the new ‘science of bodily power’, physiology, which deployed the physicists’ discovery of the transformation of energy. (It should be added that there followed the reverse effect when Joule, whose work was known to Marx and Engels, took from political economy the category of ‘work’.) She believes Marx adopts ‘Ludwig Büchner’s notion of a body based on energetic interchange with its environment,’(63) which he advanced in his Stoff und Kraft of 1855. Behind Büchner lay von Helmholtz who first coined the term ‘labour-power’. It seems that Marx’s definition of abstract labour in terms of expenditure of energy owed something to this contemporary revolution in thinking about the human.

Although she has a citation to an article on ‘the Podolinski business’ Wendling doesn’t deal at all with the current debates around thermodynamic models of the economy. This is important because Marx and Engels, although ‘physiological’, were far too sophisticated to accept a crude energy model of production complete with a measure of abstract labour in calories (see Burkett and Foster 2009, pp. 134-5).

If I may now expand on this: I suggest the physiological reading of abstract labour is a form of fetishism. The social positing of commodities as values leads to the fetish-character of commodities because the commodity product as such appears as value. But if the commodity is fetishised it is likely that the activity producing it is fetishised. How does this happen? Just as value inhabits the natural body of the commodity so we find the social process of value positing is carried by living labour. This makes it look as if it is living labour itself that ‘produces’ value as well as use value – but of course in the ‘abstract’. The positing of labour as a hypostatized abstract activity gives material labour a fetish-character. Then, if the valorisation process is conceptually collapsed to the labour process that bears it, productive labour in some material definition is taken to produce value. It is fetishised as inherently productive of value.

This is precisely what Marx does when giving a physiological definition of abstract labour. The consequence of the value-form is that capital treats all labour as identical in its bearing on value and surplus-value. But the further identification of this socially abstract universal (a hypostatisation) with the empirical similarity of labours as expenditure of energy is intended by Marx to bolster this imputation naturalistically. This is unfortunate because it puts social determinations aside in favour of an abstract materialism. However, the identification of the universality of labour with expenditure of energy in the abstract is an ideological reduction of the productive potential of labour to the level of the output of a labour-power machine. But this fits beautifully capital’s reflection of its own homogeneity into an equally homogeneous ground, work in the physiological sense.

The question arises as to whether Marx is aware of this. But I can find no trace of irony in Marx’s discussion at this point. It seems then Wendling has a case when she suggests that Marx performs the contradictions of capitalism.