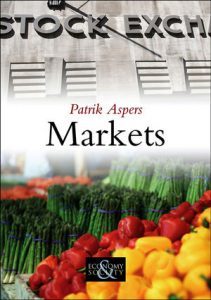 Nicola Livingstone is a lecturer in real estate at the Bartlett School of Planning, University …

Patrik Aspers book offers something different – a straightforward theoretical exploration of ‘markets’ within the evolving field of ‘economic sociology’, which is informed by both historical and contemporary commentary. The book encourages the reader to think differently about embedded, taken for granted notions of traditional economics which fail to account adequately for human influence. In this respect, ‘a central claim of the book is that economic actions are essentially social, which has consequences for the definition of the economy’ (xi), and how it can be understood. Such social actions are reflected in and through markets (which are never considered as a singular proposition), via the multitudinous and varied interactions which govern and affect our own economies and therefore life experiences. These are the grounding concepts upon which Aspers expands, engaging with history and existing theory, extending and developing ideas, considering additional future research. The book is written as ‘a map which can help to sort different approaches in accordance with the forms of markets, rather than according to the more traditional dividing lines in economic sociology’ (xi).

Markets has two distinct halves. Aspers aims, ‘not only to review the existing literature, but to offer a sociological approach to markets’ (x). Aspers provides a definition of a market as ‘a social structure for the exchange of rights in which offers are evaluated and priced, and compete with one another’ (xi). For a market such as this to exist it must address three prerequisites: ‘the first prerequisite is that it is clear what is traded in the market; the second is that there must be rules governing what to do and what not to do in the market, and, finally, the offers or what is traded must obtain an economic value in the market’ (9). From these prerequisites Aspers draws out his primarily descriptive literature review and ‘sociological approach’. The initial chapters of the book introduce its purpose and structure, with early chapters considering social coordination (in terms of markets, hierarchies and networks) and the role markets have played in society throughout history.

Some of the most enjoyable elements of Markets come from the lively international and historical context Aspers provides, through tales of the reciprocal Kula trading systems (22), the underworld of the Spanish ports of Cadiz and Seville (49) as well as specific market cultures in Istanbul (109) and Indonesia (108). Aspers use of such practical examples interest the reader, but on reflection on these and the language employed, it is difficult to ascertain for whom the book is written. In some respects there is a lack of balance between detailed analysis and simplistic description, tone and style are not always consistent – is the text for students, or academics or a general audience? Overall, the book works well as an introductory text for students or anyone with an interest in expanding their awareness of how markets operate. However in various ways its analysis succeeds in introducing more questions (174-6) rather than providing answers (consider some of the questions on page 3). Although the former stimulates thought and further investigation, the ambitious approach of discussing and referring to a variety of wide-ranging topics leaves certain topics neglected and under-discussed. Aspers does not set out to provide an encyclopaedic meta-analysis of every influence in economic sociology and how they relate to the markets (nor should he try to), but offering brief and basic overviews of additional literature doesn’t always add depth to the text, and it can prove frustrating for the reader.

The manner in which Marx is addressed (62) is one incidence where a richer discussion would have been possible, however Aspers reflection in this case proves elementary. This is a shame as the influence of Marxist theory can be implicitly observed throughout the text and would have provided an interesting (and relevant) additional perspective had it been examined in more depth. In particular, some links between the open Marxist school of thought and the economic sociology of markets are particularly discernible. The roles of the state and the labour market respectively, are other influences which are not considered in detail, which is surprising considering the interconnections between governance, labour and markets. However, these brief references do provide the opportunity for further analysis of markets from additional points of view, which may be the very reason for their inclusion.

Previous comments should not imply that the literature review is uninformed. Aspers provides solid background on key contributors to the field of sociology. Lauded theorists such as Weber and Simmel were early protagonists of ‘economic sociology’ at the turn of the twentieth century and the concept experienced a renaissance of sorts in the 1980s through sociologists White and Granovetter (20-1). Building on Polanyi’s earlier work, Aspers suggests that ‘the different forms of coordination – network, hierarchy, and market – are ways of reducing complexity and, above all, of creating order in the environment, to enable production, distribution and consumption’ (28). However much of what is discussed, such as in the previous quote, is presented in black and quite terms, which fail to account for the fragility and complexities of markets in capitalist society. Order is not something guaranteed – in fact markets are being continually reconstituted due to their experience of crises (crisis is briefly touched upon later in terms of market making, 156-7). Although the author discusses how markets are reflexive (36), the content itself could be more reflexive, offering a deeper critique. The capitalist system is touched upon (57-63); however the assertions made here again are somewhat sweeping, general and lacking in depth. Comments like ‘markets are not inherently correlated with rational capitalism’ (80) imply that the notion of ‘rational capitalism’ is an accepted and taken for granted notion, even though capitalism as an ideology is far from a rational straightforward concept.

The substantial contribution of Markets lies within the later chapters (4-7), where Aspers begins to develop ‘tools for understanding markets’ (147) by debunking neoclassical models and thinking about market ‘forms’. The notion of order as a means to overcome uncertainty persists, but deeper questions about are addressed through rethinking the notion of ‘economic man’ (73) and considering the role of ‘identity’ in markets. Aspers also introduces how different types of markets can be categorised and interact, ordered through ‘standard’ and ‘status’ markets (89), which are either ‘switch-role’ or ‘fixed’ (83). The latter roles reflect whether actors in the market permanently behave in one way (fixed) or whether they ‘switch’ between roles (e.g., buyers and sellers). A status market is one in which ‘the sets of buyers’ and sellers’ identities are more entrenched than the offers’ (89), whereas in a standard market the ‘situation is reversed: the offer is a more entrenched social construction than the identity rankings of actors in the market’ (89). Examples of these markets include standard fixed role (wholesale flower market), standard switch role (stock exchange), status fixed (clothes shop) and status switch role market (bazaar). In chapter 5, Aspers expands on the standard markets and in chapter 6, status markets. There is an interesting discussion of how these markets interact and reconstitute themselves in the global markets, which considers identity, monopolistic competition and practical examples such as the stock market.

The study is concluded with how markets are made and controlled (chapter 7), which includes an explicit recognition of the role that crisis plays in market reconstitution and change (163). However, the forming of markets is seen as a sequential (in some ways circular) movement, from orientation to contraction, to cohesion and crisis/change (154-65). This may help with a student’s basic understanding of how markets operate, but it also evades a lot of the realities of complex markets. Spontaneous and organized market making, responses to chaos and mutual adjustment are also concepts which are considered in this penultimate chapter. Aspers clearly demonstrates how the tools/map which he has constructed throughout the book can blend together to deepen understanding of markets, with the concluding chapter offering ‘seven points, or areas of research, that are in need of additional research’ (174). The prerequisites are clearly revisited and the book concludes neatly. As a starting point, Markets works well as an introduction to how necessary it is to investigate and further our understanding of the way in which society moulds markets and vice versa. Although Aspers was brave to tackle such a topic and a variety of useful concepts emerge, this text merely scratches the surface. The book should be the beginning of further exploration in economic sociology (which hopefully would include the state, the left and the labour market). I have to agree with Aspers that there is a lot more research to be done.