Marx & Philosophy Review of BooksReviews‘The Northern Question: A History of a Divided Country’ by Tom Hazeldine reviewed by James Hodgson 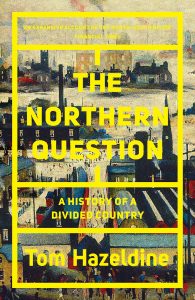 Tom Hazeldine
The Northern Question: A History of a Divided Country

James Hodgson is a Teacher of Economics, and has a Ph.D. in Politics from the University of Yo …

The division between Northern and Southern England is a long-running feature of British politics. Since many areas in the North of England voted to leave the European Union in 2016, this division has received renewed interest from writers and politicians, including the government’s ‘levelling up’ agenda. In this highly relevant book, Tom Hazeldine seeks to define the North of England in both geographical and cultural terms, and to explain the North-South divide.

The Northern Question is a scholarly and wide-ranging book, constructing a historical narrative of the political and economic evolution of the North of England from the medieval period to the present. Moreover, it is written in a compact style that renders it accessible to both the historian and the non-specialist. It is an illuminating work that reveals much of the elite history of England and its regions. The book’s chief flaw is that it sometimes loses sight of its objective, such that the reader gains limited insight into the contemporary politics of the North or its cultural orientations. This provides scope for several criticisms.

Firstly, the focus on the division between the North and South of England itself presents difficulties. While any delineation of Northern England will be somewhat arbitrary, Hazeldine defines it as the region northward of the Mersey-Trent-Humber line. Though the division between the English North and South evidently exists (even if we might be foggy on the geographical details), there is an ever-present danger that the division obscures more than it illuminates. From the vantage point of contemporary British politics, there are numerous ways of slicing the English cake which have equal analytical value. For example, the South-West of England and its relationship to London and the South-East barely feature in Hazeldine’s story. And while Manchester emerges as the world’s first industrial metropolis and site of working-class struggle, the distinctive characters of other English cities and regions (specifically the North East and the West Midlands) are barely explored. One is tempted to say that the fixation on the division of North and South papers over the more salient and interesting, but much less discussed divisions of East and West.

This leads to a second and related criticism: the North-South distinction homogenises the parts of England into competing blocs, with little regard for different, distinctive identities within these spaces. Indeed, it seems not to occur to Hazeldine that there may be plural ‘Northern English’ identities, and that these may be divergent and overlapping. A more fine-grained analysis of intra-regional differences never appears. On reading his work, one gets the sense that the North’s unspoken centre-of-gravity is the Pennine borderland between Lancashire and West Yorkshire, with Manchester providing its meagre cultural history. This is both predictable, given that Manchester has become synonymous with ‘Northern’ in the lexicon of many English Southerners, and unhelpful, given the diversity of identities which are overlooked. (Perhaps not coincidentally, Hazeldine hails from Manchester and studied at the University of York, so he is presumably familiar with the trans-Pennine corridor.)

Halfway through the book, the reader is struck by the impression that Hazeldine’s North strongly resembles Schrödinger’s cat: it both exists and does not exist, depending on one’s perspective. This leads to some strange realisations. As a native North Easterner, I am often struck by how indigenous residents of Yorkshire and Lancashire appear more likely to adopt a self-consciously ‘Northern’ persona than those of Northumberland, Wearside, etc., even in their dealings with fellow Northerners. Absent any sociological research, we might speculate this is due to the former’s proximity to the South and the consequent motivation to sustain a contrastive identity that remains resolutely English. This relational Northern-ness does not exist to the same degree in the North East, owing perhaps to its regional history as a borderland between England and Scotland. This is not to suggest we should engage in a quest for the ‘true’ North, as this would amount to little more than a pointless game of regional one-upmanship. But Hazeldine’s book would have certainly benefited from a greater engagement with divergent ‘Northern’ identities and sub-cultures.

This leads to a third criticism of Hazeldine’s approach: the North appears more of an abstraction than a living entity. This is the chief shortcoming of The Northern Question, that the actual people of Northern England are largely conspicuous by their absence, whether in the form of testimonies, ‘on the ground’ interviews, simple anecdotes or autobiographical reminiscences. Instead, we are presented with the view from above. The book is replete with accounts of Westminster politics, corporate decision-making and internal party struggles. This leads to the suspicion that this is because Northerners, especially the working-class, have a tendency of not always acting how the author expects them to. For example, we are told that following the Great Reform Act of 1868, the working-class ‘dutifully voted in Liberal and Tory candidates from the business and professional classes’ (78). Similarly, when representatives did emerge from the Victorian proletariat – such as Thomas Burt, Liberal MP for Morpeth and one of the country’s first working-class MPs – Hazeldine suggests they were quickly and easily co-opted against their own class interests. Burt ‘hated strikes (“an ugly weapon”), resisted the introduction of a national minimum wage for coal, and thwarted the national miners’ Eight Hour Campaign’ (79). He nevertheless enjoyed a long career in Parliament, retiring in 1918. This gives the impression that ordinary people, when they appear at all, are nothing more than a bunch of class traitors and credulous dupes.

Hazeldine does not, then, offer us a grassroots account of the history of political mobilisation and the lessons we may draw from it. Instead, it presents an unashamedly elitist view of history, which leads us to Brexit. Hazeldine does not attempt to interpret the result of the referendum. At no point does he interrogate the motivations of Leave voters in the North, offering instead a blow-by-blow account of the 2016 referendum campaign and the 2017 and 2019 general elections. He merely ascribes to the Brexit vote the character of a revolt against the elites and a rigged economic settlement, with the added dimension of decades of post-industrial neglect. While commonplace, this perspective is welcome given his earlier treatment of the Northern working-class. Hazeldine clearly has little sympathy for the Remain campaign or for the status quo championed by the likes of Tony Blair or Keir Starmer. He offers what amounts to an apologia for Jeremy Corbyn’s leadership, and contends that the Labour party committed electoral suicide by incubating a second referendum position. This would have been interesting to explore in light of regional disparities, but Hazeldine declines to do so.

The final criticism to be levelled at The Northern Question is quite simply that the relationship between England and the other constituent parts of the UK is left unexplored. The author might well reply that the subject is concerned with the internal, non-constitutional divisions of England. Nonetheless, any future discussion of Englishness in British politics must attempt to answer the question of how England is to be represented, given the asymmetric devolution between England, Scotland, Wales and Northern Ireland. This fits well with Hazeldine’s project, yet it remains unexplored, and the result is an England (North and South) that is oddly decontextualized. One would be left none the wiser that England is just one part of a multi-national state, or that the future constitutional order of that state is currently threatened by movements for Scottish independence and the question of the Irish border in relation to EU treaty negotiations, as well as a resurgent English nationalism that is making itself felt in electoral outcomes. (In another curious absence, the ‘n’ word rarely appears in the book, perhaps because it causes discomfort?) Despite the reluctance to engage with these issues, much depends on how they are answered, whether in the form of further constitutional fragmentation or in the development of a new civic nationalism for England and for Britain as a whole.

So we must ask: if Hazeldine is not interested in these questions, what questions is he interested in? By the end of the book, it can be said that Hazeldine failed to see the trees for the forest, not seeing the distinctive plurality of sub-regional identities and differences, or the ordinary experiences of the men and women who make up the place, as worthy of interest. But neither, it seems, does he appreciate the wider context in which England exists and which goes some way to accounting for its internal idiosyncrasies as a beast of many colours. On an uncharitable reading, then, we might simply say the book falls between two stools, and fails to be one thing or the other. On a more charitable reading, we might say that The Northern Question is neither micro nor macro-level analysis, but occupies that awkward mesosphere which is both uncomfortable and restlessly thought-provoking. Readers must judge for themselves.