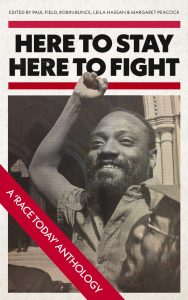 Race Today was the London-based journal of the Race Today Collective (RTC), a group of radical Black activists who were influential in radical Black politics in England in the 1970s and 1980s and who formally dissolved as an organisation in 1991. For most of its existence (1974-1988), the journal was edited by Darcus Howe, who had been an active member of the (British) Black Panthers prior to his appointment as editor. The RTC drew intellectual inspiration from the Trinidadian-born Marxist, C. L. R. James (uncle of, and intellectual guru to, Howe). Race Today was, in the words of the editors of this anthology, ‘established in 1974 along explicitly Jamesian lines’ (3). In the space of 250 pages, Here to Stay, Here to Fight (HSHF) showcases more than fifty articles that were originally published in Race Today and its’ offshoot publication, Race Today Review. The anthology was produced as ‘part of a series of initiatives designed to ensure that the legacy and political work of [Darcus] Howe and the Race Today Collective are preserved for the benefit of future generations’ (7).

There appears, to me, to be a tension between the Jamesian guiding principles of the RTC on the one hand and, on the other hand, the HSHF editors’ aim of preserving the legacy of the RTC for the benefit of future generations. Farrukh Dhondy says that Race Today was not created as ‘a recorder of events’ but as an activist publication, through which the RTC would be ‘instrumental in the strategic self-organisation of the new communities of Britain’ (107). Dhondy’s explanation of the role of the journal is very Jamesian. The role of Race Today was understood to be as an instrument in the spontaneous struggles of People of Colour in Britain. The journalism of the RTC was not to undertaken to create first drafts of history for future generations to mine. It was intended as an active element in the history-making process itself. When Kennetta Hammond Perry describes Race Today as providing ‘an archival resource to uncover the contours of working-class Black women’s experiences in Britain’ (71), Perry appears to recommend Race Today as a record of events and experiences. Perry’s comments suggest that the legacy of the RTC is to have endowed an archive for future generations of historians to draw on, in their writing of histories from below.

Of course, these two ways of thinking about the legacy of the RTC are not necessarily incompatible. Dhondy is highlighting Race Today as practice, or method, while Perry is highlighting Race Today as written content. It is possible to be ‘instrumental in the strategic self-organisation of the new communities of Britain’ today and create written content in the process. Doing so, however, would mean something different in the third decade of the twenty-first century, than it did in the 1970s and 80s. The fact that the RTC is no longer an active organisation, and there appears to be no successor organisation operating with Jamesian principles, means that Race Today as practice has no organisational expression today. It is always possible that the ‘series of initiatives’ (7), which the editors refer to in the Introduction, includes plans for a successor organisation. The lack of any references to the new (i.e., immigrant) communities of today –or the issues of Brexit, Islamophobia or even resistance to the ‘hostile environment’ policy of the Conservative government– in the pages of HSHF, however, suggests that the focus is on Race Today as (historical) content.

The articles reproduced in HSHF provide a good indication of the richness of the content that was published in the pages of Race Today. HSHF includes a selection of articles by named authors, both members of the RTC and invited contributors. These articles sit alongside ‘editorial’ pieces with authorship attributed to ‘Race Today’. An indication of the breadth of topics covered can be seen by the seven thematic sections of HSHF, which are named respectively ‘Race Today and British Politics,’ ‘Black Youth in Revolt; Sex, Race and Class,’ ‘Asian Communities, Asian Workers and Race Today,’ ‘Challenging British (In)Justice,’ ‘Creation for Liberation,’ ‘Race Today and Culture,’ and ‘For Black and Third World Liberation.’

The instrumental role of RTC members in ‘the strategic self-organisation of the new communities’ is illustrated in the pages of HSHF in myriad ways. The RTC were present at, reported on and were often important participants in some of the key events of radical Black history in England. HSHF contains, for example, articles written from the frontlines of the strikes, led by South Asian women workers, at Imperial Typewriters (1974) and Grunwick (1977), and articles about the self-organising of Caribbean women nurses employed in the National Health Service (NHS). The self-organisation of ‘new communities’ –a term which RTC conceptualized to connote immigrants from the Indian subcontinent and from the Caribbean, as well as their British-born offspring– was not confined to workplaces. HSHF also contains articles about Housing campaigns, community self-defence against racist attacks and Black youth resistance to discriminatory treatment in schools and resistance to police harassment. These articles present the perspectives of, and often use the words of, the Black people who were active participants in the events described.

The RTC were not only co-creators of content for Race Today, but also played leading roles in some of the important events in radical Black history in England. The RTC, for example, played a key role in organising the 20,000-strong ‘Black People’s Day of Action’ protest in 1981. This demonstration was, at the time, the largest ever organised by Black people in Britain. The Action was mobilised in protest against the Metropolitan Police’s negligent investigation of the New Cross Massacre, i.e., an arson attack on a house party in New Cross, London that resulted in the death of thirteen black youth.

The self-organisation of the new communities also involved what Dhondy characterises as creative arts with a ‘political thrust’ (176). In HSHF this activity is represented in an interview with the streetwise Black British autodidact visual artist Caboo. It is also evident in references to the RTC’s role in organising the First International Book Fair of Radical Black and Third World Books, in London in 1982, and in their formation of a masquerade band, the Race Today Mangrove Renegade Band, that regularly performed in the annual Notting Hill Carnival in London.

There also appears to be a tension between the revolutionary aims, which the RTC espoused at their founding, and the more modest achievements of RTC during its existence. The RTC aimed to be, or rather conceived themselves already to be, ‘a truly revolutionary socialist group’ (3). Its surviving members credit it with a more modest legacy. Linton Kwesi Johnson notes that by the time the RTC folded in 1991 that ‘the obstacles to racial integration [in Britain] became less formidable’ and the RTC’s ‘contribution to that change was not insignificant’ (10). One legacy of the RTC, in this reading, is that they played a role in helping the new communities to gain a place in British society. Farrukh Dhondy suggests something similar when he says that the demise of the RTC ‘was a symptom of the initiation, growth and success of spaces and forums’ in which Black cultures were ‘featured and celebrated’ (176). If, however, the RTC was a victim of its own success, this success was at the cost of abandoning the goal of overthrowing capitalism and its replacement by a socialist society.

A gap between goals and achievements are a recurring experience for revolutionary organisations. This gap is not grounds for criticism, in itself. The problem arises when we do not face said gap with sober senses. This leads me to an aspect of HSHF I personally find to be the most disappointing, that is, the lack of critical evaluation of the legacy of the RTC, especially on the part of the former members of the RTC.

HSHF hints at numerous contradictions, but fails to confront them with each other. In this review I have briefly looked at two contradictions in HSHF, the former being the contradiction between Race Today as practice and Race Today as content, and the latter the contradiction between the revolutionary aims of the RTC and its more modest achievements. There are other contradictions worth exploring, but in the short space left here I will confine myself, briefly, to the contradiction inherent in the RTC’s embrace of ‘political blackness, which sought to unite all people of colour who had been exploited by colonialism’ (5). In the 1970s and 1980s the British state was involved in direct military confrontation with Irish people who were actively struggling against British occupation of the six counties of the North of Ireland. In the pages of HSHF there is, however, some ambivalence about the Irish as an oppressed people. There is a contribution by former Sinn Fein President, Gerry Adams. This contribution, nonetheless, refers to the early 1960s, the period prior to the emergence of the civil rights movement and the consequent war, and draws no parallels between British colonialism in Ireland and elsewhere in the world. Furthermore, the index has an entry for Bob Marley but not for the IRA hunger-striker Bobby Sands, and another for the Bradford Twelve but not for the Birmingham Six. Curiously, despite the avowed internationalism of the RTC, there is more than a hint of parochialism in both the English, if not downright London, focus of HSHF and the restriction of the category of ‘political blackness’ to people of colour.

Darcus Howe and the RTC have left behind a rich legacy. To avoid that legacy becoming a museum piece that is preserved like a stuffed animal, it might help if the planned ‘series of initiatives’ (7) included some attempt at confronting the contradictions in the theory and practice of the RTC. The legacy of the RTC would be all the richer as a result.