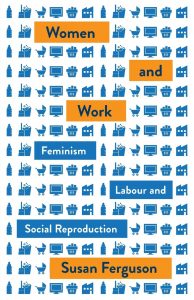 Nic Cottone is a PhD student in the Department of Philosophy at Michigan State University. Nic’s …

In Women and Work: Feminism, Labour, and Social Reproduction, Susan Ferguson carefully maps a history of feminist thinking about work and makes a compelling case for the present need to grapple with the way compulsory work under capitalism affects women. She develops an integrated theory capable of addressing and explaining the ways in which anti-racist feminism is necessarily anti-capitalist, rather than holding patriarchy, racism and capitalism as separate systems. Ferguson draws upon multiple trajectories of feminist thought to situate and develop a contemporary iteration of social reproduction theory (SRT) rooted in anti-oppressive politics. Carefully weaving together insights from anti-racist feminism and Marxism, Ferguson pushes SRT into new directions by complicating the traditional idea that unpaid housework is the shared condition of women under capitalism; rather, Ferguson elucidates how social reproductive work consists in activities involved in reproducing life, whether those activities are service work or child-rearing, paid or unpaid, or occurring within institutions, the workplace or within the home.

In the first section of the book, Ferguson traces a historical lineage of feminist thinking about work consisting in three trajectories: socialist feminism – including what she calls critical equality feminism – and liberal, rational-humanist forms of feminism. The second half of the book analyzes social reproduction theory. Her analysis of these historical trajectories does not simplistically juxtapose them according to their radical potential; rather, it carefully highlights the divergences and similarities of them to set the stage for a multi-faceted analysis of contemporary socialist and social reproduction theory. The central differences between these three strands concerns their form of critique. Ferguson argues that rational-humanist feminism primarily develops a moral critique about women’s work that identifies cultural and legal limitations as the fundamental problem; in contrast, critical equality feminism develops a critique that starts to explore the relationship between women’s work and capitalism. From her thorough survey, Ferguson’s analysis provides us with the tools to recognize vestiges of liberal and socialist feminism in present day theories. It also foregrounds new developments to be made in SRT. For instance, equality feminism shifts away from rational-humanist feminism by developing an economic, rather than moral, critique of women’s work. In turn, social reproduction theory harnesses the economic critique found in socialist feminism, but pushes the critique into a different direction: it identifies the organization of the capitalist mode of production itself as the problem.

The feminist accounts considered by Ferguson also differ in whether or how they attend to the relationship between racism, sexism and capitalist exploitation. Ferguson underscores the importance of providing an integrated account of women’s oppression under capitalism. An integrated theory attends to the way in which racism and patriarchy are intertwined with capitalism, rather than holding them as distinct systems. It implies that the fight for women’s freedom cannot occur while racialized capitalism remains intact. This is a lesson brought to the fore by examining the history of feminist thought. Ferguson highlights a shortcoming of early socialist feminism and critical equality feminism by showing that, for differing reasons, they do not target capitalism itself as impeding women’s freedom. They both advance the idea that women’s oppression consists in the gendered nature of women’s labor, which facilitates women’s dependence on men. The result is that the pursuit of women’s freedom essentially entails overcoming the gendered division of labor; abolishing it would permit women to freely enter the work force, which would in turn end the dependence on men that comes from the nature of women’s devalued, unpaid work. Considering these concerns, contemporary SRT must explain the ways in which the capitalist mode of production itself – which shapes a historically specific form of gendered labor – is the ‘key obstacle to women’s freedom’ rather than gendered labor itself (85).

The need for an integrated theory becomes even more evident when we notice how SRT has long focused on the question of value – the question of whether unpaid social reproductive labor is capitalistically productive. The Wages for Housework (WfH) movement, for instance, regards housework as the central aspect of women’s condition under capitalism. WfH argues that women become responsible for re-producing the workforce necessary for capitalism, with some asserting that such reproductive work – either directly or indirectly – produces value. Ferguson provides us with two salient reasons as to why we should move beyond the question of value, both of which are worth considering in detail.

One concern comes from critiques made by black and anti-racist feminisms: the focus on unpaid housework as the defining factor of women’s oppression misses the racialized, social differentiation of women with respect to labor. According to this critique, socialist feminism and SRT fail to represent all the material realities of women, including the way that some households run on women’s access to a wage – as opposed to the idea that women primarily occupy the role of unpaid housewives – or the racialized nature of underpaid – and not just unpaid – domestic work. For these reasons, SRT must decenter unpaid housework as the central aspect of social reproductive work.

While Ferguson’s book constructively evaluates the development of SRT vis-à-vis its need for an integrated theory, it understandably cannot address all aspects of feminist thought that need to be analyzed through an integrated theory. The strength of Ferguson’s book is its focus on women’s work and the ways in which capitalism shapes women’s unfreedom. One pivotal aspect of oppression against women not addressed by this framing – at least not explicitly – is sexual violence, and how it may relate to the compulsion to work under capitalism. The prevalence of sexual violence under capitalism warrants a sustained exploration of the role, meaning and nature of sexual violations against women and those made socially vulnerable to it. The point here is not that the occurrence of sexual violence under capitalism is unthinkable within social reproduction theory; in contrast, there are reasons to believe that SRT offers key insights.