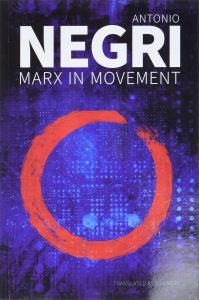 Since the publication of his and Hardt’s epochal study Empire in 2000, Negri’s name has become associated with manifold infamies – most damningly of all, that of postmodernism. His latest book, Marx in Movement, is unlikely to convince anybody who is already dismissive of his broad political and economic analyses of their worth; however, this is also not its intention. Many of the essays compiled in this anthology have here been translated into English for the first time. Overall, they are intended to document Negri’s ‘own contribution to the development of workerism, and in particular to the transformation represented in the transition from the mass worker to the social worker’ (4). In this respect, Marx in Movement, as well as the two volumes which its author promises will follow, should be read as Negri’s attempt to state definitively what his theoretical contribution to Italian workerism (or operaismo) is, rather than as a novel articulation of his ideas in light of critics’ condemnations of his works. Despite its ostensive concern with setting the record straight, many of the articles compiled here function equally well as an introduction to the analysis that Negri has been developing since the 1970s. Accordingly, it ought to be of central interest not only to historians of his work, or indeed to those working in the increasingly prominent Anglophone history of Italian workerism inaugurated by Steve Wright, but also to anyone concerned with understanding the ideas of this controversial figure, as well as their practical relevance for contemporary anti-capitalist organising.

Marx in Movement is divided into three parts, each dealing with a different facet of that singular insight of which Negri takes himself to be the original author: the historical transition from the era of the mass worker to that of the social worker (and later on, to that of the multitude). The first part, titled ‘From the Mass Worker to the Social Worker,’ elaborates in excruciating detail Negri’s work in the fields of political economy and state theory. In this, he is explicit about his attempt to apply more rigorously than those before him the workerists’ ‘key methodological concept – that of class composition’ (18). Explaining his use of the term, he says, ‘[t]he concept of class composition, which was developed originally through the analysis of the mass worker – as a means of classifying changes in the nature of labour-power and as a critique of purely logical and economistic characterisations of these changes – can now be updated as a historico-political, subjective social definition of labour-power’ (33). In other words, Negri’s commitment to workerist methodology is a commitment to historicising the core elements of the Marxian analysis (especially labour-power and, in the second and third essays, the state and value), updating them where necessary to the contemporary organisation of the relations of production. It was, Negri contends, because of their failure to deploy an analysis sufficiently in-step with the development of production that the struggles in Italy of the 1960s, culminating in the Hot Autumn of 1969, were doomed to fail: ‘not only was the concept of the mass worker late in developing, but also, crucially, it now proved incapable of developing for itself a theory able to match the new dimensions of command’ (16). For Negri, Tronti’s mass worker does describe a historical stage in the development of the composition of labour – namely, the point at which the worker was objectively determined by the four-fold influence of Taylorism, Fordism, Keynesianism and the planner state (13-4). But what Tronti had failed to realise is that capitalist valorisation was no longer focused in the direct labour process: labour-power had become social, diffused throughout society in a way that enfeebles the factory struggle, but empowers the fights associated with non-traditional forms of labour across society.

The second part of Marx in Movement, ‘Workers and Capital Today,’ largely applies the analysis of contemporary capitalism already worked out and explores its origins in the workerists’ turn toward the ‘Fragment on Machines’ from Marx’s Grundrisse. The first paper in this section begins with Marx’s description of the contradiction between the development of the productive powers of society and capitalist regulation of production, culminating in the ‘overturning of the law of value’ (87). Out of this overturning, Negri suggests that a new political subject has emerged, which he characterises thusly: ‘The main element in the production of value and wealth is no longer direct labour, but this general productive force that arises from the social body of knowing and doing; the fundamental pillar of production and wealth is the social individual’ (90-1). Out of the development of this new political subject, the social individual, new possibilities for emancipation emerge. Negri’s point here is roughly as follows: when technology has developed to such an extent that machinery no longer requires the insertion of workers’ living labour-power to produce value, the worker, rather than sitting inside the labour process instead becomes its manager. Then, because workers exist in an extrinsic relation to the production of value, they cannot be controlled entirely by capitalist management of the labour process. From this point on, the life of the worker outside of the effectively closed circuits of capital can be affirmed for itself in the name of self-valorisation, such that ‘[t]he measure of wealth is then not any longer, in any way, labour time, but rather disposable time’ (124; quoting Marx 1993: 708). It is also in response to the possibility of self-valorisation that the role of the state in relation to capitalism changes fundamentally. Because capital has lost the means to fully control labour and capture the value produced by it within the workplace, the state is adapted to assist and ensure the subservience of labour to the production of value. It is in this context, Negri insists, that labour ‘can in principle reject the form of valorisation imposed on it and therefore, even under command, develop its own autonomy’ (115).

The final part of the anthology, ‘Polemical Considerations,’ turns to Negri’s relation to Mario Tronti. A change of tone is immediately recognisable here: while part one is highly academic and theoretical, and part two expresses an optimistic message about contemporary prospects for revolution, part three sorrowfully recounts Tronti’s journey from workerism to social democracy, while attempting to assess the reasons for this transformation. Acknowledging that Tronti’s contributions to Italian Marxism are inescapable (156-7), Negri nonetheless challenges Tronti’s ‘break with the workerism of the 1960s,’ which led ultimately to the latter’s insistence that ‘the party is the key to every process’ (160-1). Negri’s indictment of Tronti’s work reaches its fever pitch in the final essay of the anthology, in which Negri argues for his own continuity with the original tenets of workerism, concluding that ‘the only post-operaista nowadays (and one with no large following) is Mario Tronti’ (176). Despite (or perhaps because of) this part’s polemical content, it is likely to be the most valuable for contemporary theorists and activists because what transpires in these last chapters makes if not forgivable then at least understandable the conceptual chaos characterising certain regions of Negri’s worldview. Negri is most criticised for his triumphalism and the conclusions to which it leads him (cf. Wright 2017: 158-62), and this triumphalism is in no short supply within his latest book. However, here we see the roots of this disposition exposed: Negri’s thought can be seen as an attempt to save Tronti’s insights from his own later pessimism and reformism. Perhaps this fidelity to the man who ‘taught [Negri] to read Marx’ (156) is responsible for the strangeness of Negri’s signal concepts like the multitude. If the multitude was developed in continuity with Tronti’s earlier works however, we would rightly expect Negri to make clear in this anthology, which again is intended to clarify his contribution to Italian workerism, the exact relation between the multitude and the social worker.

We can conclude by considering more closely the central theme of this anthology, namely Negri’s discovery of the transition from the mass worker to the social worker. As the central theme of the book, we would be right to expect a clear account of the stages of this transition and its relevance for contemporary organising. What we are presented with instead is a confused genealogy of the development of the mass worker. The first two parts of the anthology insist that we currently exist in the era of the social worker. The final paper of part two, written in 2019, introduces another possibility: that we now exist in the era of the cognitive worker (139). This addition happens in the context of Negri’s claim to have discovered in Marx’s Grundrisse a ‘third-degree subsumption’ within which we currently exist, not the formal or real subsumption of labour under capital, but ‘subsumption under general intellect’ (132-3). I have grave doubts over the veracity of this claim: as the work of organisations like Angry Workers in the UK demonstrates, the struggle of the mass worker continues today, albeit in a definitively changed form – now predominated by cheap and precarious foreign labour. However, the confusion of Negri’s interpretation of the transition between stages in the organisation of labour is deeper than this. The final essay in the anthology, written in 2017, insists instead upon the historical transition from the social worker to the multitude (168). If contemporary capitalism is apt to be described by the transition to the multitude as well as to the cognitive worker, are these two characterisations in fact one? This latter transition, although the focus of several of Negri’s larger works, is nowhere near as clearly analysed as that from the mass worker to the social worker. With some luck, the future volumes which Negri has promised to release will contribute to the much-needed clarification of his immense theoretical system.