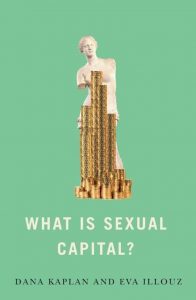 Dana Kaplan and Eva Illouz
What is Sexual Capital?

Emily Laurent-Monaghan is a graduate student in philosophy at Newcastle University. …

Beginning with a note of irony, What is Sexual Capital? poses a seemingly straightforward question: ‘what is sexual capital?’The authors Dana Kaplan and Eva Illouz begin by taking stock of recent sociological efforts to pursue the task of doing sociology more joyfully, to pen the social world in a way that will help us better understand sociological phenomena such as ‘sexual capital.’ The authors criticize previous attempts to make sense of sexual capital, as a ‘sociological metaphor.’ These colloquial approaches seek to articulate the consequences of a ‘world made sexy,’ without a substantive account of how this production is possible in the first place. What is Sexual Capital? belabors a response to its eponymous question,which poses a manifold challenge, with which the authors are poised to grapple given the fidelity of their respective researches. Their intellectual labours dovetail at a particular conjunction: thinking through contemporary neoliberal subjectivity.This timely intervention brings to mind Alenka Zupančič’s 2017 What is Sex? The emergence of these inquiries signals an investment to re-articulate what has been ‘left out’ of the discourse on sex, sexuality and ‘sexual capital.’ In contrast to the positivist and progressive discourses about sex, knowledge, and (political) economy that seamlessly posit a transparent human subject who freely acts according to her desires – social theory rejects these presumptions tout court. The labour of articulating the sexual in relation to capital brings to mind Adorno’s caveat regarding the conceptualization of progress: ‘the concept of progress dissolves at attempts to specify its exact meaning’ (Adorno 2005: 143). Similarly, when we try to define sex, or sexuality, it slips away from us. Despite this, the authors attempt to theorize our postlapsarian, urban and neurotic sexual moment.

The first and second chapters (‘Sex and Sociological Metaphors’ and ‘Freedom and Sexual Capital’) set the groundwork for thinking through the novel conception of sexual capital in chapter three (‘What is Sexual Capital?’) – ‘neoliberal sexual capital’ – which describes how sexual capital is inseparable from the marketability and employability of the subject: ‘sexual capital is a part of specifically neoliberal “desirables such as autonomy, esteem and capacities for self-expression”’ (88). These ‘desirables’ are inextricable from the criteria for employability and cannot be thought outside of the process of economization. Presently, we can understand the operativity of sexual capital through the ‘performance-pleasure apparatus,’ which encourages subjects to constantly seek out new experiences and to re-invent their subjectivities in ‘creative’ ways. Neoliberal sexual capital shows how the economization of the subject is no longer purely cognitive, but penetrates the core of our sexual being. Consequently, non-labour time, such as leisure, or time spent curating one’s virtual persona, can no longer be considered as separate or bracketed from one’s ‘employable’ being. As the authors put it: ‘workers are required to act as one (wo)man brands,’ and this is twenty-four hour production (93). The branding of the subject is one of many ‘scopic’ demands put forth by neoliberal capitalism; what may be most disturbing, however, is the injunction to ‘enjoy’ this requisite form of self-branding, which blurs the lines of ‘enjoyment’ and ‘employment.’

When the authors pose a question apropos the ‘advantages’ of sexual capital – ‘Are these advantages merely sexual, or can sexual assets yield non-sexual advantages, too?’ – they are simultaneously exposing the fact that non-sexual advantages such as the subject’s ‘esteem’ and ontological security are part and parcel of the production of sexual capital. While this description makes clear the stakes for thinking through our situation, such that sex is no longer (at least in the overdeveloped West) safeguarded by religion, nor is it reducible to biological demands, it is subject to new injunctions.The brute reality suggests that overcoming the intractabilities of theological and biological demands have not led to subjective emancipation. As the authors demonstrate, the cause for emancipation has simply been rebranded. Furthermore, any recourse to the discourse on sexual liberation is always already eclipsed by capital. Nancy Fraser describes this hijacking of sexual freedom as a ‘redefinition’ of ‘emancipation in market terms’ (13). Thus, there can be no epoché of the self: the private, sexual subject does not exist.

In contrast to the robust description of capital, the description of sexuality put forth by the authors is rather weak. The authors could do more to belabor the concept of sex/sexuality, in order to make clear the conceptual stakes of thinking sexuality in conjunction with capital. Sexuality, understood along psychoanalytic lines, calls into question the presupposition of a unified subject. Of course, the authors are aware of this, as they mention the splintered subject throughout the book. However, without the psychoanalytic overtones, this description of a split subject is posited without theoretical elaboration in regards to the primary cause: the incursion of sexuality as such. The Freudian account could be made more explicit, as it is indeed Freud’s Three Essays on Sexuality (1905) that inaugurates the modern subject of sexuality, from which neoliberal sexuality springs. Considering the book’s svelte form, this critique does not outweigh the descriptive value of their sui generis concept of sexual capital. Though it does limit the reader conceptually, insofar that their concept of sexuality remains inadequately dialecticized, thus inhibiting a more substantive psychoanalytic account of sexuality.

Criticisms aside, What is Sexual Capital? Should be situated alongside Marxist and Freudian interventions that seek to unearth the ideological kernel at the heart of the idea of the subject. Despite philosophy’s constant interventions apropos love, the naïve belief that love exists gratis remains. If sexual capital permeates all aspects of economy and its attendant culture – including romantic/erotic love and other forms of intersubjective relations – then love is necessarily entangled in this production. Though several decades of feminist theories have attempted to think through the so-called private realms of social reality that pertain to the domestic/romantic – and though such divisions are largely acknowledged to be fabrications – this belief in ‘free’ love persists. The description of neoliberal subjectivity chaffs against the permissive atmosphere of belief.This disavowal of love qua sexual capital is symptomatic of the regressive slide into the non-theoretical discourse of personal freedom, conditioned by the belief in the sovereign individual. Whether explicitly stated or not, love is imagined to be a final refuge outside of the machinery of capital’s grip. Against this disavowal of negativity that subtends capitalism and sexuality (otherness, alienation, non-relation, etc.); the authors make clear that nothing escapes the dominion of capitalism and its fetish-character.

In terms of historicizing sexual capital, the authors situate the conditions for neoliberal subjectivity in the political economy of (early) modernity: ‘The way sexuality appears in ideals of the self is always social. If in the traditional world sexuality was shaped by religion, in late modernity it has become chiefly intertwined with the economy’ (2). The authors describe modern sexuality as having a ‘dual process,’ such that sex becomes rationalized and objectified in the discourses of science, while at the same time becoming an attribute – a ‘property’ of the subject (28). This historical unfolding is theorized against the (imagined) autonomization of sex that develops as a ‘relatively’ distinct space of human freedom. It is against Foucault and Weber that the authors put forth their conception of sexual capital, taking into consideration the particular historical formation that enables each to posit their conception of sexuality; pace Weber, sociologists could postulate an ‘erotic sphere,’ a relatively autonomous space that could act as a bulwark against the incessant calculative thrust of capitalist production. By contrast, neoliberal sexual capital cannot be postulated as existing outside of the public or social spheres. As the authors argue, the degree of the pronounced economic character has become so explicit that it is no longer distinguishable.

What is Sexual Capital? reveals the machinations that prop up the injunction to simultaneously sell – and sexualize – one’s labour power. One must keep in mind that this is a sociological account. Thus, it concerns the infringement upon social milieus that were precisely not sexual, i.e. certain service sectors and professions. The claim is not that we are all ‘sex workers.’ Rather, the book works to demonstrate how sexual capital has become a ubiquitous, subjectivizing force. To this end, the authors seek to demonstrate how this particular form of subjectivity is historically and socially conditioned. The book is not simply a diagnosis of neoliberal sexual capital, but rather an intervention, such that neoliberalism doesn’t simply make this form of sexual capital possible, but advances its normalization and integration into every sphere of life, including spheres that were previously considered ‘normative,’ and ‘non-sexual.’ As an intervention, the book urges us to trouble ‘enjoyment,’ not only discursively, but reflexively; to think through how entrepreneurial subjectivity is fed by neoliberal sexual capital and vice versa.Within the present regime of technological apriorism that fuels subjective precarity, What is Sexual Capital? serves as a crucial reminder that capitalism enjoys for us – and how the social order – including the forced choice to sell one’s labour – is organized around this enjoyment.