Marx & Philosophy Review of BooksReviews‘James P. Cannon and the Emergence of Trotskyism in the United States, 1928-38’ by Bryan D. Palmer reviewed by Fabian Van Onzen 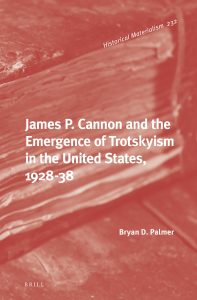 Bryan D. Palmer
James P. Cannon and the Emergence of Trotskyism in the United States, 1928-38

The period of 1928-1938 was one of the most fruitful for the American Trotskyist movement. The movement’s early leaders elaborated on Trotsky’s theories through their revolutionary practice in the Communist League of America and the Socialist Workers Party. Bryan D. Palmer’s new book, James P. Cannon and the Emergence of Trotskyism in the United States, 1928-1938 examines the key debates of this period. He shows how American Trotskyists addressed racism and black oppression, women’s liberation, the fight against Stalinism and the challenges of building a new, anti-Stalinist Marxist international. While the primary focus is on Cannon’s role, it provides one of the most thorough and well-written histories of American Trotskyism.

In the mid-twenties, the early Soviet Union became isolated as a result of failed revolutions in Western Europe. From the necessity of industrialising the country and running the new workers’ state, a bureaucracy developed within the Soviet state that granted special privileges to government officials and administrators. Soviet conditions were reflected in the international communist movement, which caused a split between the Stalinists who uncritically defended the Soviet Union and its bureaucracy, and the Trotskyists who called for a political revolution against the bureaucracy in order to restore Soviet democracy. In the Communist Party USA (CPUSA), a Trotskyist grouping emerged around James Cannon and Max Schachtman. Initially operating as an external faction that tried to win Party members to its positions, the American Left Opposition later broke from the CPUSA and formed the Communist League of America (CLA).

In the introduction, Palmer criticises revisionist historians of the CPUSA, showing that they have not devoted enough attention to James Cannon and the American Left Opposition. Although there have been some excellent revisionist histories of the American communist movement, such as Mark Naison’s Communists in Harlem During the Depression and Randi Storch’s Red Chicago, Palmer points out that these narratives have not sufficiently criticised Stalinism and the participation of CPUSA activists in persecuting Trotskyists. In fact, revisionist historians have a localist focus and tend to view communists as honest people who wanted to fight for a better world. Palmer argues that they sometimes apologise for Stalinism by claiming that most average Communist Party members did not hold Stalinist beliefs or subscribe to the Stalinist programme of the CPUSA. He argues that even if they did not agree with the programme of the Party, those who remained in the CPUSA and did not struggle against Stalinism were often still corrupted by the Stalinist politics of the American Communist Party.

While the Trotskyist movement sought to break with Stalinism, Palmer argues that Cannon and other American Trotskyists sometimes brought harmful Stalinist practices that they learned in the CPUSA into the Communist League. For example, Palmer shows that Cannon was sometimes guilty of using bureaucratic organisational methods to address political differences. Cannon’s ‘blunt bureaucratism was learned   within the Stalinism milieu that had to be unlearned’ (305). This behaviour brought Cannon enemies, such as Max Schachtman, who was hostile towards him and viewed him as a dogmatic, sectarian ideologue who refused to accept criticism. Palmer argues that previous accounts of Cannon were filtered through Schachtman’s perception of him, which may have had some truth but did not truthfully analyse his contributions to the Trotskyist movement, nor did they sufficiently account for Cannon’s errors.

In the first part of the book, Palmer chronicles the hostility and occasional violence on the part of CPUSA members against American Trotskyists. After the expulsion of the Trotskyists from the CPUSA, the Party launched a wave of violence against Trotskyist leaders. Palmer examines the ways that CP members would spread false information about Trotskyism, break up party meetings, stalk Trotskyist activists, and use physical violence to intimidate sympathisers of the Trotskyist movement. He argues that even the critical rank-and-file CP militant bears some responsibility for the demoralising violence resorted to against Trotskyists. He shows how the violence against Trotskyists was connected to the Stalinist Third Period position that non-Communists were ‘social fascists’ and had to be treated no differently from the Nazis or Mussolini supporters.

One of the most interesting parts of the book is Palmer’s detailed assessment of how American Trotskyists addressed what was then called the ‘black national question.’ The CPUSA argued that African-Americans constituted a nation as opposed to a race, and defended their right to self-determination in the Black Belt South with the right to form an independent African-American Soviet republic. One of the chief theoreticians of the ‘black nation thesis’ was Harry Haywood, who argued in his Black Bolshevik that its chief purpose was to win African-Americans over to the side of Communists and unite black with white workers. As Robin D.G. Kelley shows in Hammer and Hoe, the CPUSA was able to play an important role in the campaign to defend the Scottsboro Boys, and sent its cadres to Southern Jim Crow states like Alabama to organise African-American sharecroppers. Palmer acknowledges that the black nation thesis did make the CPUSA devote significant attention to fighting racism, but that the demand for an ‘African-American Soviet republic’ was not taken seriously by most African-Americans.

Palmer examines how American Trotskyists broke with the CPUSA position on black oppression and developed their own unique approach to it. First, they rejected the idea that African-Americans constituted an oppressed nation, viewing them instead as a racial minority within the American working class. Palmer highlights how American Trotskyists worried that the Comintern approach stimulated nationalist sentiments, thereby preventing the development of class consciousness amongst black workers. As one CLA member put it, an African-American is ‘integrally part of the American working class and any attempt to segregate him is absolutely wrong’ (347).  Instead of self-determination and an African-American Soviet Republic, American Trotskyists called for revolutionary equality, working class unity, and socialist revolution as the key to ending the oppression of black people. This approach would allow revolutionaries to form a united front with trade unions, African-American organisations, and other progressive forces. Interestingly, Palmer notes that Trotsky himself was very critical of this position, for he worried that the CLA’s demand for equality was too reformist. Trotsky thought the slogan of self-determination for African-Americans was a revolutionary transitional demand, one that would expose the racist nature of capitalism since the bourgeoisie would never grant it. Palmer highlights how this resulted in a sharp debate within the CLA that addressed the necessity of distinguishing communist demands on equality from bourgeois reformism, as well as analysing non-proletarian African-Americans, such as the black petty-bourgeoisie.

Palmer provides a detailed account of how the CLA approached the trade union movement. He points out that early 1930s America was characterised by a heightened period of class struggle and strikes. These strikes were mostly carried out by rank-and-file members and often combined economic with political demands. Palmer notes how the American Federation of Labor (AFL) often tried to end these strikes through use of bureaucratic trade union officials, who would accept concessions and unfavourable terms for the workers. During this period, the CPUSA embarked on the ‘Third Period’ strategy, which involved creating independent red unions and viewing all non-communist organisations as ‘social fascists’. Palmer argues that this resulted in the CPUSA being isolated from workers in the AFL, leaving them under the leadership of conservative AFL bureaucrats. Seeing an opening, Cannon and his comrades in the CLA tried to unite with rank-and-file AFL members in order to isolate the bureaucratic trade union officials. In 1934, the CLA played an important role in the leadership of the Minneapolis General Strike, which was organised by non-union truckers and resulted in the creation of an active Teamsters branch. Palmer examines the role of the CLA in the strike, particularly focusing on how they united the rank-and-file against the conservative Teamsters bureaucracy in order to consolidate a militant strike leadership. In addition to building a strong mass movement, the strike brought the CLA new working class members who had experience in taking industrial action.

After the strike ended, an important debate about entryism developed in the Trotskyist movement. In France, Trotsky urged his followers to unite in order to enter the French Socialist Party (SFIO), which he viewed as a short-term measure to capture the current of progressive young workers and recruit them to the French section, the Bolshevik-Leninist Group. Palmer shows how the entryism debate affected the American Trotskyist movement. Cannon supported the French turn, and argued that the American situation in 1934 was almost identical to what French Trotskyists were facing. Just as in France, Cannon wanted American Trotskyism ‘to break out of its isolation, expand the ranks of active revolutionaries, and intersect with wider currents of the labor movement’ (705). To prevent the liquidation of the CLA, Cannon argued that it was necessary for revolutionaries to continue publishing their own newspaper, maintain Marxist education within the CLA, and not make concessions to reformist leaders. In extraordinary detail, Palmer examines the process by which the French Turn was Americanised in the CLA and the debates that developed around engagement with the Socialist Party.

James P Cannon and the Emergence of Trotskyism in the United States is one of the finest scholarly works on American Trotskyism. Some might find it a bit intimidating, as it is over 1200 pages and can be quite challenging at times. However, since the book is well-organised by topic, those who do not want to read it cover-to-cover will still find it an extremely useful resource for studying the American Left-Opposition. Its encyclopaedic nature therefore makes it a good resource for Marxist activists, leftist students or socialist academics.